One of the hardest things for me is trying to contain my creativity during the summer. I typically am not able to accomplish anything — although I usually take on some projects that are more pool or kid friendly.

But this year was going to be different. My children are older — I reasoned. I would have some time — at least, I though so — until I adopted a puppy.

I’ve been house training her — but I’ve had to spend a lot of time outside — and I can’t get much of anything done outside — although I did drag out a folding table one day and use it for some drafting. 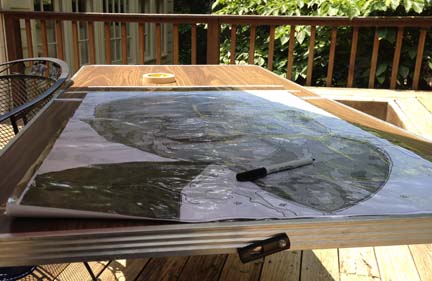 My Fiber Art Fusion group has a show coming up in September — the theme is Artifacts. I really struggled with this one. I don’t like to work in themes — I think it takes away from inspiration — but in fact, over the last couple of years, it has pushed me to do things that I otherwise wouldn’t have done — which has created growth in my work.

I was really confused about how to integrate the theme of Artifacts into my work. I make portraits and I want to continue with that body of work. And then it occurred to me — I have a large collection of men’s ties.

I first used them in pinwheel blocks around my first portrait — Ama. After that, I made many pinwheel pillows as gifts and on commission. I found that even unappealing ties — ones from the seventies with strange colors and polyester material — when used with a lot of other ties and placed on black — can look really rich. So when someone in the family passes, I typically ask for the tie collection. I also have many from my husband and I have bought them at yard sales and thrift stores.

So I decided to try to use ties to make a portrait. I had no idea if it could be done. I haven’t seen it done before — but I think that if you use the right values, you can collage just about anything into a recognizable form.

Ties are tricky to work with though. After my first selection of a color palette, I began to realize that the sheen of some of them affected their value. Working with cotton all the time, I wasn’t prepared for that. So I took a lot of trips to a local thrift shop.

I couldn’t find a white tie — although I tried hard. I finally decided to use a white lining fabric that I had in my stash. Its pattern is reminiscent of a tie pattern. The yellow gold that comes after it is the lightest tie I could find. I suppose that men need ties that will hide stains — although this one very clearly has a lipstick stain which I left to emphasize the character of the materials I’m using. 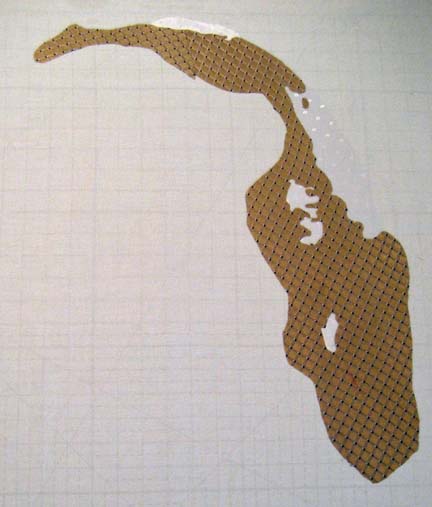 It’s when I went to my next value that I began to realize I had another problem. Below is the drafting of the wonder under– and there is no way that that is going to fit on one tie without it being broken up. I had to develop a system for cutting the wonder under in some places & putting it back together with overlap. 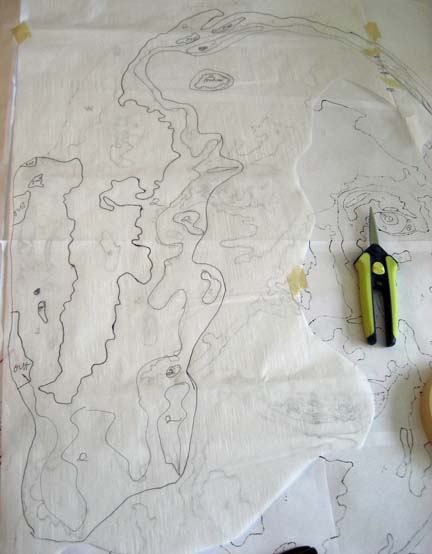 There was practically nothing left of this tie when I was done. 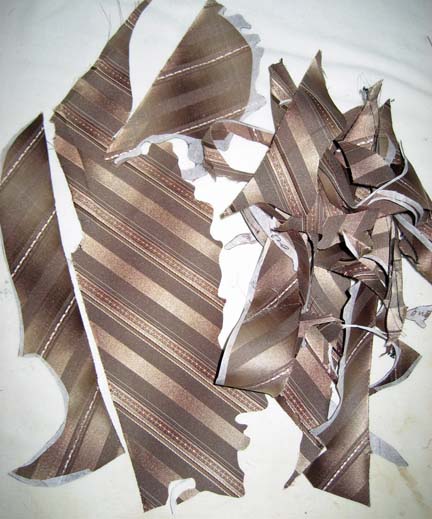 Reassembled, it isn’t so terribly obvious that I had to make some splits. 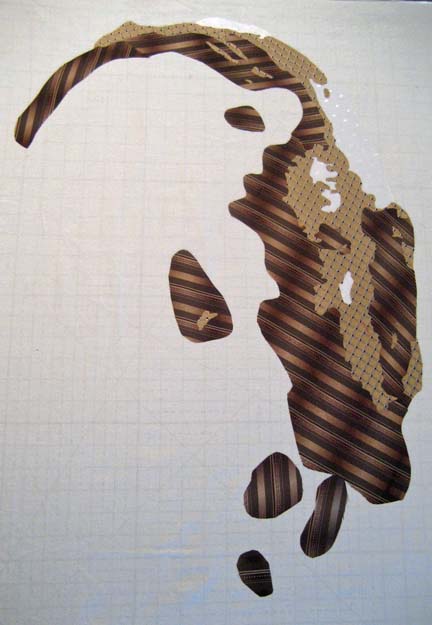 However, the next value not only required that the pattern be split but I also needed more fabric than was available on one tie. The one on the right was my original tie — the one on the left is one I found to go with it. 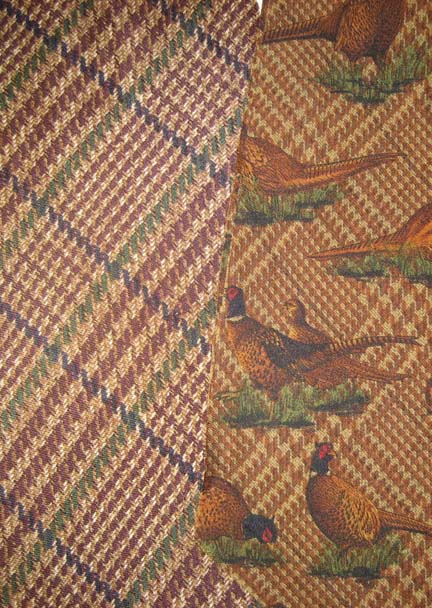 As you can see, I used up most of the large spaces on both of these ties. 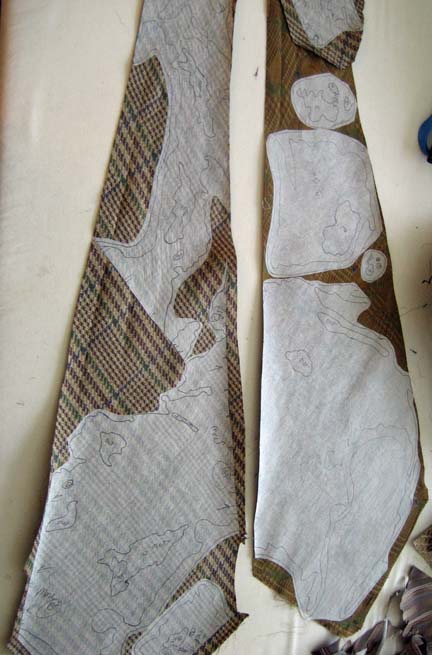 I think the only obvious demarcation is along the forehead but I think that it will become less of an issue as the rest of the layers are added.

This shows the fourth layer. Again, there were two ties used with a similar pattern. 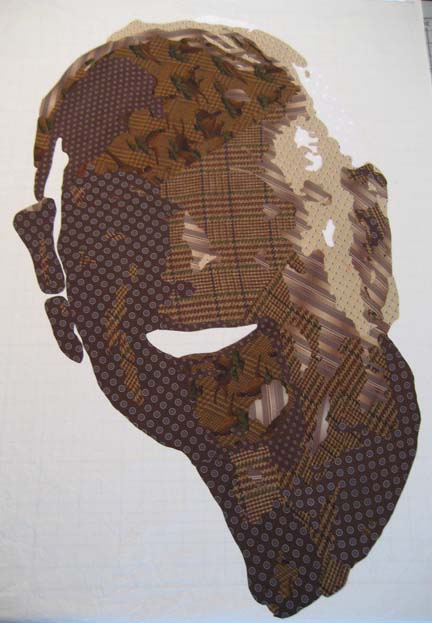 And this shows the final value. 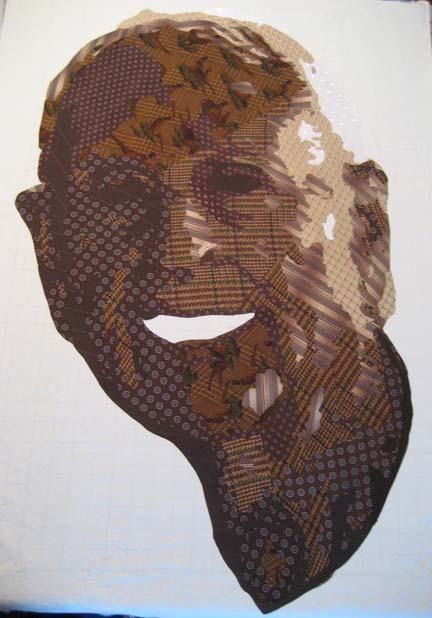 I still need to add detail for the eyes and the mouth. I’m not certain I can use only ties for the eyes — and I know I’ll have to use cottons for the whites and grays needed in the mouth. But I’m happy with what I’ve been able to do thus far.

This entry was posted by Virginia Greaves on July 12, 2012 at 6:28 pm, and is filed under Design, Inspiration. Follow any responses to this post through RSS 2.0.You can leave a response or trackback from your own site.