At the end of the year, I look at my goals and see how close I came to achieving them. Here is it January 8th — I should have done this at the end of 2013 — but I got the flu after Christmas, and it took all of my energy for a couple of weeks. I’m just now beginning to recover and put together the pieces of everything I have to do in my life. Today was the first time I’ve had to look at my art goals.

2013 was the year that “I finally broke into the sunshine at the International Quilt Festival/Houston” — and 2014 was the year that I created controversy.  But just like I said last year — I’m still here and kicking — and I hope to continue to create in 2015. 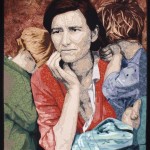 — My blog was viewed 21,00 times in 2014 which broke all of my previous records. The highest viewed post was The Use of Someone Else’s Photograph in Your Work, the subject of which was the controversy over my piece Worry at the International Quilt Festival/Houston this year.

— Worry and Golden Moment were accepted into Georgia Artists at the Abernathy Arts Center here in Sandy Springs, GA, an exhibit highlighting the work of local Georgia artists from all mediums. Golden Moment won 1st place.

— Worry was accepted into International Quilt Festival/Houston: World of Beauty and was awarded 3rd place in the Art-People, Portraits, and Figures category.

— Dolce Far Niente was accepted into the special exhibit What’s for Dinner? at Quilt Festival/Houston.

— The Cardinal was shown at the Square Foot Fiber Art Pin Up Show at the Southeast Fiber Arts Alliance here in Atlanta and then was donated and auctioned at the International Quilt Festival/Houston Silent Auction. 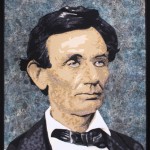 — Rebecca Reasons-Edwards and myself co-curated another exhibit this year called Fierce Fibers at The Art Place in Marietta, GA. Beach Guardians, Golden Moment, A Walk in Twilight, and Worn were exhibited.

— Golden Moment was accepted into Art Quilts XIX: Permission to Play at the Chandler Center for the Arts in Chandler, AZ and was awarded Juror’s Choice & 3rd Place.

— Firecracker was included in the article Pet Portraits Popular With Owners Who Quilt in the Daily Sentinel published in January.

— Heike Hellmann-Brown wrote an article about me and my work that was published in the local publication North Fulton Family Life in August.

— Sold Lincoln to a private collector.

— Sold I Am the Vine, You are the Branches to a private collector.

— Sold Worry to a private collector. 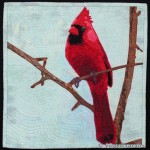 — Sold The Cardinal to a private collector.

— Met goal of selling at least 2 of my pieces.

— I completed 3 large portraits, 1 small animal portrait, 1 small abstract, and 3 large abstracts. (All of the abstract works were made in collaboration with Leisa Rich.) (Goal to make at least 6 large pieces met.)

— I started a collaboration with a local artist, Leisa Rich. We have been working on an abstract series based on car washes and are planning a two person show at the Abernathy Arts Center in October of 2015.

— I applied and was accepted into Studio Art Quilts Associates as a Juried Artist Member.

— I spoke at The Atlanta Modern Quilt Guild in Marietta, GA, The Alpha Arts Guild in Alpharetta, GA, and the Misty Mountain Quilter’s Guild in Blairsville, GA.

— This year I kept a massive spreadsheet and kept track of my hours. I have to find a simpler way to do this. Halfway through the year, I decided that I not only wanted to keep category totals but also totals by project — so I ended up keeping two separate spreadsheets.

— What I didn’t do well with this year was keeping myself to at least 15 hours per week in the studio. I only met that goal 59% of the time. I was on track until I started taking freelance scoping work on the side. The truth of the matter is that my family is a part time job, so freelancing work cut into my art time. I do think I will keep this goal in 2015 however. I just need to work on being smarter with the time that I do have available.

— I didn’t keep my sketching goal at all. I have no problem drafting out a pattern for a particular project, but I can’t seem to make myself stop and fill a page in a sketchbook.

— I easily increased web traffic 5%. Given the controversy over Worry at IQA/Houston, my traffic increased 55.4% over last year.

I am eternally grateful for the support and encouragement of my friends and other people that reached out to me during the controversy over Worn. I am reminded that my place is to hold up others to the light and forward their achievements in a positive way. I leave all the others that still have lessons to learn — behind.

This entry was posted by Virginia Greaves on January 8, 2015 at 12:04 pm, and is filed under Accomplishments. Follow any responses to this post through RSS 2.0.You can leave a response or trackback from your own site.