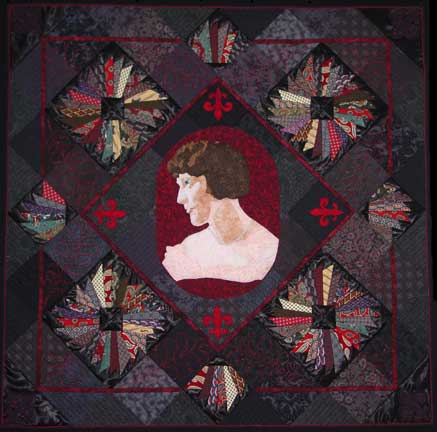 This is a piece based on a portrait of my great-grandmother Ama. It was her wedding photo. The drawing of the portrait was a UFO as were the pinwheels made from men’s ties. The two seemed to need each other.

This is my first human face. I found it very difficult to work with commercial fabrics to get the values and colors that I wanted.

This was also a very difficult quilt to photograph. I first tried to photograph it on a sunny day and found that the face was completely washed out. Then I tried on a cloudy day, and surprisingly, it was also too bright. What finally worked was to take it in my studio with the lights off with a flash.

Part of the changes to the background of the face were made with the help of Julie Duschack (who by the way does incredible portraits in cloth). She showed me that I could use Photoshop as a design tool, and I have since spent a lot more time learning to use it. The last In Process picture shows a lot of changes made to the quilt in Photoshop including feathers that I drafted, scanned into my PC, sized, colored, and then put on the quilt.

I learned a lot with this piece. I had to stabilize the silk of the ties, and I found that I don’t like working with satin (it isn’t very forgiving). The feathers have been quilted with Ricky Tims’ Razzle Dazzle thread which had to be used in the bobbin. The face and shoulders are trapuntoed – which is a larger trapuntoed area than I have had before. The borders have fused faux suede in the corners. I learned that they can’t be sewn through and that an iron can hurt the nap of the suede. And finally, this was my first quilt to use an accent piping which took a long time for me but I think adds the perfect final effect to the quilt.