It’s All About Me

I haven’t written in while since I got the news that we will be moving. I have been in the same house for 10 years and have found that I have roots that are difficult to move. I was much more agile in my twenties and always moved at the drop of a hat. Even as a child, my parents moved me around at a fairly steady rate and we rarely stayed in a house five years. I suppose that as we grow older, we become more settled and resistant to change — which is an odd feeling for me since I have always considered myself akin to a chameleon.

I have been working on a Tshirt quilt. It is made from Tshirts and baby blankets from the daughter of a friend of mine. She died at the age of 6 about a year and a half ago, but we still think of her and miss her. 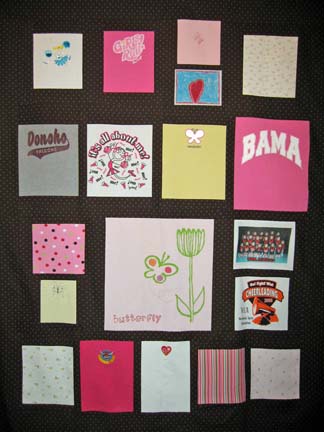 She had a lot of pink so I asked her mother if I could go with the pink and brown color scheme that is so popular now. Although I’ve never been a fan of brown, it has lately started to grow on me. I even painted my bedroom a cafe au lait color. I love the way that the chocolate sets off the pink in this quilt.

Now to figure out how to quilt it. It is very large — over a queen size but not quite a king — and was difficult to hang for a picture. I would throw it on my Hinterberg frame, but I had to take it down to declutter the house. I’ll have to think on this one.

I have also been working steadily on my next portrait quilt. I have had many requests to follow the creation of a portrait and will post progress soon.

This entry was posted by Virginia Greaves on November 6, 2007 at 4:18 pm, and is filed under Design. Follow any responses to this post through RSS 2.0.You can leave a response or trackback from your own site.