« Books As My 2nd Love
Rejection »

I friend of mine wrote me an email last night to tell me that she enjoys reading my blog, but I haven’t updated it since July. I admit that I think about writing in my blog — in fact, as a young student, writing was my means of creative expression.

Have you ever seen the movie Biloxi Blues? It is based around the boot camp days of a young writer. There are many scenes in which he realizes the power of words once they are written on the page and how deeply they can affect other people. At one point, he tries to rip up his notebook — to undo what he has done — but a friend reminds him that they can’t be undone and that he shouldn’t compromise his thoughts for the convenience of others. Well, that can be easier said than done. I had several friendships crushed because of my writing, and I think that although I retain a love of the written word through my incessant reading, I have been reluctant to return to the blank page.

And so I approach my blog with some trepidation. I am also a fairly private creature by habit and cannot fathom giving details of my personal life to the internet for anyone to read. But deep down, I love writing. I spend time thinking about what I will say, and when I finally sit in front of my keyboard, I pitter out my words with great affection.

Well, you ask, what have I been doing. The children were home for the summer and I had a marvelous time. I didn’t get much done, but I read a lot by the pool which was very relaxing. I did work up a pattern for a quilt I am working on now. It is from a picture of my mom’s dog, Fancy. She is a beautiful Brittany Spaniel that she got just after Hurricane Katrina. We are convinced that she was a well loved dog because she was beautifully trained but she was probably hastily given away when evacuees were unable to keep pets with them at shelters and hotels. To whomever had her as a puppy, know that she is well loved and taken care of. In many ways, I think that the universe conspired for her to go to my mother, a woman who needed daily unconditional love — and quite frankly, it was her turn. 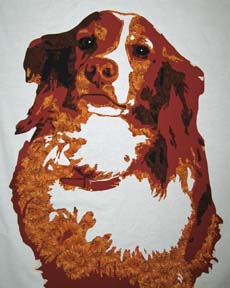 I also started a few thread sketches. They are intended to be practice for studying the human face. The first one is my mom: 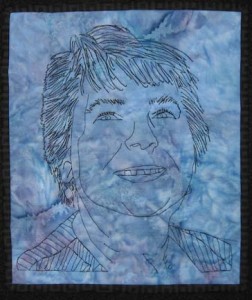 and the second one is my friend Lisa (she had no idea when I wanted to snap her picture over lunch that I was really going to use it): 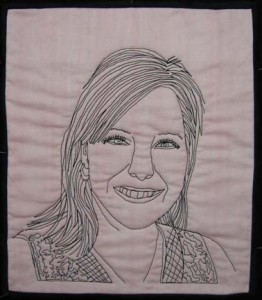 These are quite fun to do and only take a day or two. However, the teeth remain very difficult. And then there is the issue of vanity. Let’s face it — no-one wants to see their faults. I think I remember my mom talking about that years ago. When you make a portrait, you have to make the person look better in order for them to like it. In some ways, it is difficult to give detail of the contours of the face in these sketches without it seeming like overkill.

I am still struggling with the medium. These are 3 layered quilts so some puffiness occurs even with a very thin cotton batting. I am considering making them with something stiff and flat in the middle instead of batting — like cotton duck. That would prevent distortion and puffing — and then they would be embroideries instead of quilts — but then they could be framed.

Also, I learned that even though I am using black thread, the background has to be a light value. The medium value I used in the first one is distracting if not seen in bright light.

I also took a workshop the other day from my friend Hellene. She works in abstract with her hand-dyed silks — and did I mention that her silks are scrumptious? She let us into her stash for the class and had us develop a small piece around a feeling. My work in general tends to be very controlled, but working abstractly and loosely are very good exercises for invigorating creativity — and I have done them before. Being able to incorporate her silks made it a lot of fun. I suffered, however, because I didn’t have the one thing I really needed — a normal set of scissors. (I always seem to get stuck in workshops without what I need.) The only pair I had was a very small pair designed for cutting threads. I misunderstood the class supply list and thought that we were going to spend more time embellishing — and that this would work fine. As it turned out, most everything I cut out was small — because my scissors were minute. I plan to continue working on it — but right now, the background is just white muslin & the contrast is too high.

I am working much faster than I did last year, and it is fun to have the creativity flowing so freely.

And finally, there is the reminder that today is September 11th. I still cannot bring myself to watch the news footage from that day for more than a few seconds. There was a cartoon in the paper of the NYC firefighters reaching the pearly gates of heaven & one of them proclaiming “Men — we’ve finally made it to the top.” This was a deeply painful experience for many of us, and it reminded all of us what it felt to be an American. I hope that that sense of fraternity isn’t lost in the coming election months.

This entry was posted by Virginia Greaves on September 11, 2008 at 12:29 pm, and is filed under Admin, Uncategorized. Follow any responses to this post through RSS 2.0.You can leave a response or trackback from your own site.