The Price of Passage

When my art group, Fiber Art Fusion, started talking about making our annual exhibit based on dimensional pieces, I was really excited — but I had no idea what I was going to do. Most ideas came & went, discarded for not being unique enough — and the one idea that stuck was to do a hanging bridge. Most all of my work is flat on the wall — but this would be sculptural using fabric as the primary medium.

So where have I been lately? Working frantically on this. I had most of the summer to think about the project, but very little time to actually work on it, and the exhibit is being hung on the first of next month.

But, thank goodness, I am finally done. It spoke to me today — and said that that was it — add no more. 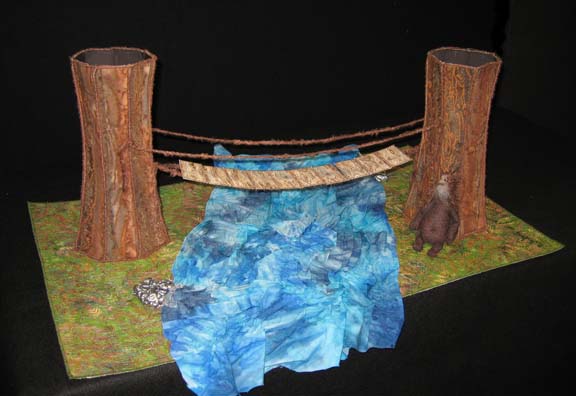 It is called The Price of Passage because of the bridge troll. How can you have a proper bridge in the middle of the forest without a troll — and of course, he’s going to expect payment for you to cross it.

I started with the trees. Our group had a great brain storming session with Sharon Ahmed in which she encouraged us to cut up paper and tape it together to come up with unusual shapes. I have also seen Terry Grant do the same thing when she is developing a pattern for a dimensional fabric teapot. At the end of school, I salvaged a sketch book of heavy white paper — most of it unused — and started cutting and taping. It took some time to figure out the size and the repetition of the pieces in order to get a nice round look. 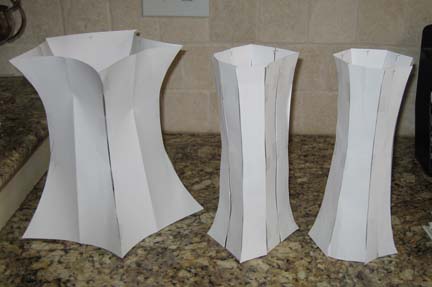 The first one on the left is my first attempt. Its diameter was too large and even though the paper was folded in the middle, helping to give a nice curve, I knew that wouldn’t translate to Peltex. For the 2nd tree, in the middle, I cut up the left & right halves — and the whole thing looked square. Adding one extra piece was a good idea — but didn’t really fix the problem enough. So for the 3rd tree (3rd times the charm), I drew the pattern with a left & right side & taped 7 of them together to give me a nice round shape. Voila — I had a pattern.

Then I cut out a side from the tree to make a template — fused fabric to both sides of Peltex — and then cut out the template from the Peltex. I wished I hadn’t done that so quickly. I then had to go back & add a fluffy brown yarn to cover the Peltex on the edges. It is much easier to mark the pattern on the fabric, sew the yarn onto the Peltex on that line, then cut it out & cover the edge with more thread. It gives you much better corners. I didn’t do that on the trees — but did remember to do that for the slats on the bridge.

Once I had 14 pieces, I started sewing them wrong sides together with a tight zigzag. This gave me a nice hinge that I think adds to the character of the trees — and it allowed me to sew them together by machine. I also added more fluffy yarn to the edges on the top & bottom of the trees before the final edge seam was sewn to give a cohesive look.

Then I made the bridge slats. They were done like the trees — with a minor change. I fused fabric to one side of the Peltex (which will be the back of the slats), marked the slats with a permanent marker, and then sewed on an O ring to the 2 short sides (thus saving me from sewing through Peltex by hand). Then I fused fabric to the front side of the Peltex and sewed a simple straight line — following the marked lines on the back side — so that I could see where to add the string on the front (I used a brown crochet thread) — which I added with a tight zigzag. The slats could then be cut out and the edges zigzagged with more thread.

Despite my eagerness, I realized at this point that the actual bridge had to be the last thing added. Again, I used a base of Peltex & fabric. By adding the back fabric first, I could sew on the finishing label by machine — and then fuse the fabric to the top. 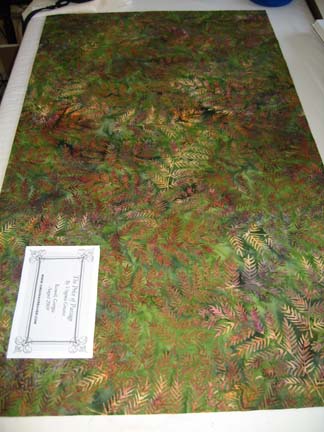 Then I took a great mottled blue hand-dyed fabric, covered the back with fusible, scrunched it up, and fused it on the base with lots of wrinkles left on top. 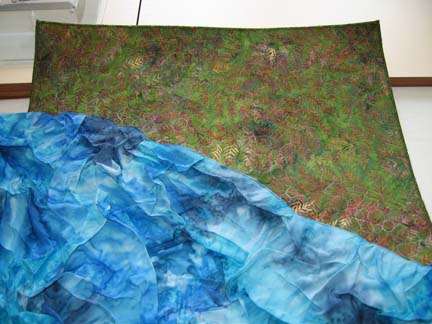 Then the base had to be quilted. Choosing quilting can be difficult, so I turned to my notebook and starting playing with ideas. (I’m a great fan of Dijanne Cevaal and am a big follower of her quilting techniques — guess it shows.) 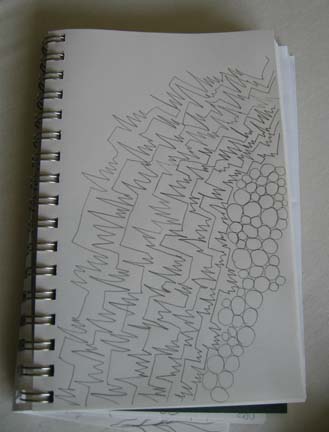 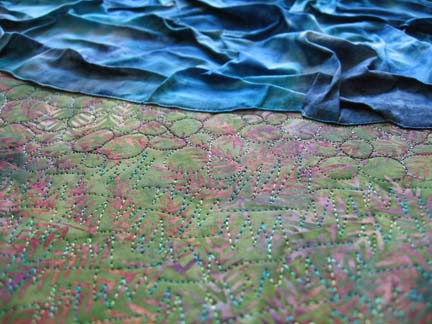 I don’t have a picture of it, but I used a metallic thread for the waves in the water. It was VERY challenging. I used a 100 Topstitch and really low tension — but it was difficult to keep the metallic thread from breaking when I was free motion quilting through Peltex and four layers of fused fabric.

Then I had to add the trees. No hope at this point but to sew them on by hand. I taped them down so they wouldn’t wiggle too much. I put on one of those sticky “thimble” sheets on my middle finger, but the needle kept puncturing it — and my finger. Then I had to wait & heal a few days. 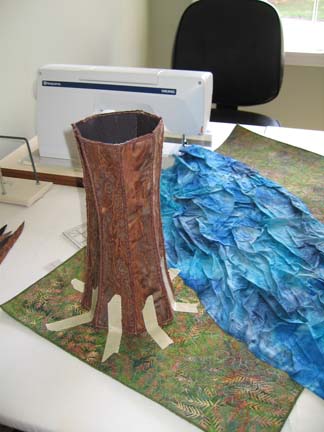 When the pain subsided, I added some metallic silver tulle and Tyvek that I had bubble melted and painted pewter.

My final addition before the bridge was the troll. I had been thinking about him all along, and in his first incarnation, he was wired (which was new to me) — but I had to discard him because he was out of scale for the piece. I don’t have a lot of experience making dolls, but after having spent some time reading Susanna Oroyan’s book Anatomy of a Doll, I knew that I couldn’t make too complicated a doll in the size that it needed to be in order to fit the rest of the piece. He also couldn’t be pretty — which was a strange thing for me. As artists, I think most of us try to make our work appealing, but a troll shouldn’t be too appealing. I drew out a main shape which included the legs, a different pattern for the arms, and a side view pattern of the head so that I could give him a nose and chin. He is my first attempt at needle sculpting a doll. He has beads for eyes, perle cotton thread details, gray wool felted on for the beard, and brown eyelash yarn for the hair.

I would have liked him to have been wired and had more detailed hands, but he is very small and for me, it made more since to hinge him with a sewn line for the elbows, legs, and fingers.

The bridge was last. I strung 2 rows of fluffy brown yarn (same used on the trees) through the O rings on the back of the slats. I also added O rings on the side of each tree. Then I tied the string to each O ring — which sounds easy — but getting the tension just right was challenging. Too much pull on one side or the other, and the slats would twist or dip. Once it was done, I had to have handrails, so I added more O rings to the trees & more yarn tied to each end.

The Exploring Dimension Exhibit will be held at The Art Place in Marietta, GA  this September 2009.

This entry was posted by Virginia Greaves on August 21, 2009 at 1:19 pm, and is filed under Art Doll, Quilting. Follow any responses to this post through RSS 2.0.You can leave a response or trackback from your own site.