How to Fly Part 4

At this point, I have added the collar of her shirt — but most of it is white so it won’t show up — so we progress to her scarf. I intentionally made it blue — because her eyes will be blue — because the background will be blue. This shows the 1st 2 layers.

It starts to make more sense in the 3rd value. 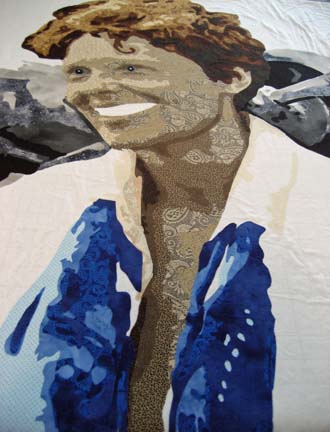 And finally fifth value . . . . . (Notice that I finally ripped off the eyes — they  just weren’t working.) 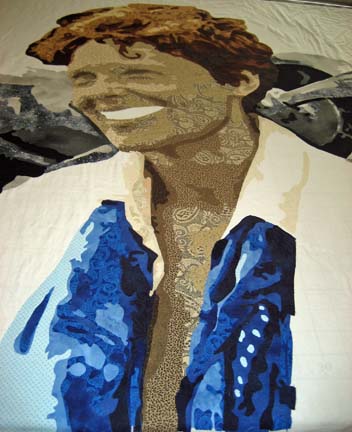 At this point I add her bomber jacket. Because of everything else, I kept it fairly simple — only 3 values.

Notice her eyes. They’re not right. The photograph was no help — she is actually squinting in the original — and all is lost. I added the irises when I did my design and thought — I’ll deal with that later. Well now later has come — and this doesn’t look quite right. 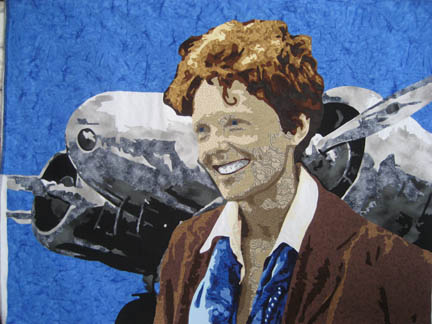 I wish I had copies of everything I tried. I used what I had done on past eyes to help me — and really nothing looked right. The one below is getting a little better — you needed the contrast of the sclera (the “white” part of the eye) — but it’s too much. (I used the lightest skin tone for the sclera.) 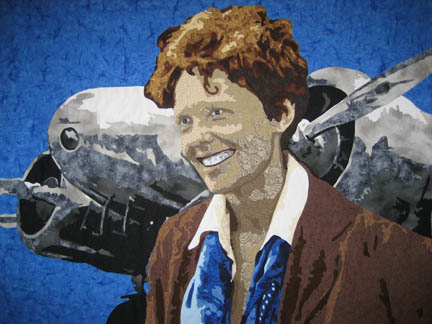 This next one is better. I took the darkest skin tone and wrapped it around most of the eye. The deep contrast to the sclera gives the impression of depth — which you need in an eye.

I also softened her mouth with a pinky brown. I usually add a dark color to indicate the recess of the inner mouth — but I chose to soften it by adding some lips. I haven’t done this before. I usually stay with the normal skin tones & quilt in the shape of the mouth. In this instance, the dark red shouted too much so I added a small line above and below it (except in the corner facing away from us). 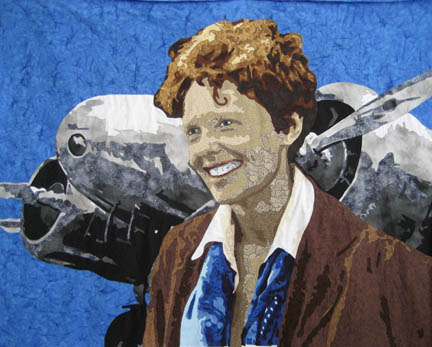 Did I get it right? Hmmmmm. Well it seems better. I ripped off the white glint I sometimes put in the eye — it gave her a strange look. I think the sclera makes her bright eyed enough. I worried about doing that since she is so gaunt and withdrawn in the original — but I took artistic license. It’s allowed.

Amelia also had large teeth. Hopefully when I quilt it that will come across.

This entry was posted by Virginia Greaves on May 10, 2011 at 1:29 pm, and is filed under Design. Follow any responses to this post through RSS 2.0.You can leave a response or trackback from your own site.