This week I pulled out the huge enameled pot that someone gave me to dye polyester fabric in some time ago (someone gave me bolts of the stuff — still don’t know what to do with it) — and I started an experiment on some of my reds. I knew that several of them have been crocking in my finished quilts and I was on a mission to stop it.

I should start by saying that I pre-wash — I bring my fabric home and throw them in the washing machine, set it to hot water, and add blue Dawn which has synthrapol in it — which will pull out excess dye molecules that may be present in the cloth but that haven’t bonded with the cotton.

So all of these reds, at one time or another, had gone through the pre-washing with hot water and synthrapol — but I had read a blog saying that you could take a crocked quilt and soak it in boiling water to fix it so I decided to try this with the fabric.

I pulled the darker reds for the piece I’m currently working on. (At this point in the week, I was still cutting yellows.) I boiled water in my massive pot and then added some blue Dawn. Once it was at a roiling boil, I added my first suspect. Immediately, the water turned wine red. 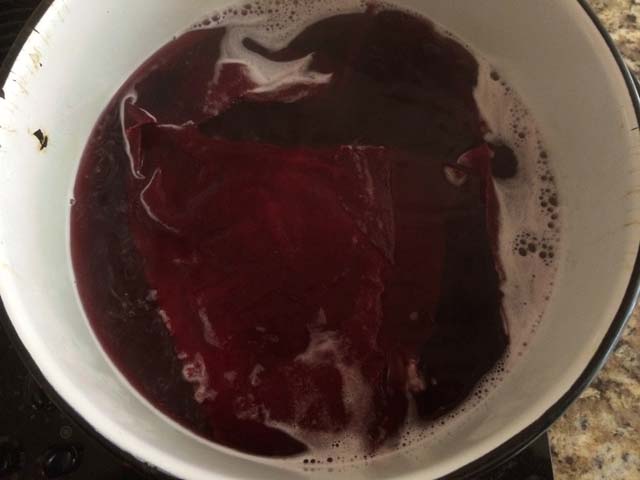 This was definitely the guilty party in several of my pieces. I boiled it for a few minutes and then set it aside to cool. When it was room temperature, I poured out the water and rinsed the fabric.

Here was the surprise — it almost immediately ran clear. I rinsed it thoroughly — even put it in more water to sit for a while — but all of the excess dye was now gone.

I did this same process with two other reds. One of them wasn’t bad — it ran a little in the beginning — the other ran a lot. Not surprisingly, the two that ran a lot were ones that I had dyed myself years ago — although in my defense, I definitely have some commercial prints in my stash that are also bleeding.

The result of this batch was the same as the first. After boiling and then cooling, the water ran clear.

The only difference between this process and what I’m doing in the washing machine is the temperature of the water. I could jack up the temperature on the water heater — but I risk boiling an innocent victim in the house. I don’t think that all fabrics need this extreme care, but there are definitely some that do. I’ll have to think on how to best identify which is which when I bring them home — maybe put a swatch in water after the washing machine cycle.

I also found the infamous bleeding green fabric in my stash this week. I thought I had thrown it away. I had bought it years ago in Florida and it runs like crazy so I vowed to never use. At the time, I washed it many times, and although the color faded, it never stopped bleeding. Now I’ll just boil it. I’m sure that’ll fix it.

This entry was posted by Virginia Greaves on July 5, 2014 at 2:03 pm, and is filed under Dyeing. Follow any responses to this post through RSS 2.0.You can leave a response or trackback from your own site.