Every year, there is a little slice of heaven on earth for quilters — or anyone so inclined to love fabric. It’s the International Quilt Festival in Houston and it’s one big party that lasts a week. Quilt Market starts the week before — but that’s for people in the biz with tax ID numbers (have to get one of those) — and I hear that they have a ball too — but for me, the time starts at Festival — and what a good time we had.

I thought I would take a few posts to walk you through the experience. I shared a lot on Twitter and my personal Facebook (I should have turned Twitter to my business page for the duration — but I didn’t think about it until I was there, and the mobile version wouldn’t let me flip the switch.)

I flew out Tuesday morning — butterflies flitting around my stomach — after a couple of nights of not much sleep. I’m prone to anxiety, and winning a ribbon at Houston and being summoned for its presentation is about as anxiety inducing an event as I care to endure in any one year.

I flew Southwest this year. Last year was Delta — and they were not missed AT ALL. I spoke with a very nice man on the airplane whose wife and sisters all quilt. We all deserve a spouse that will support our sewing habit.

On the shuttle ride in from the airport, I was lucky to be seated by Bobbie Korengold (to the left) and Ellen Newsom (to the right). One thing that you find in Houston is that everyone is friendly (well, except one person that was very rude at the luncheon — but I just walked away her.) Ellen was meeting a bunch of friends from out of town for the show — and Bobbie had received THE CALL. That’s the call that tells you that you’ve won one of the big 8 prizes — a Mastery Award or (heaven forbid) Best of Show. IQF paid for her trip for a week, and she was there with her husband. 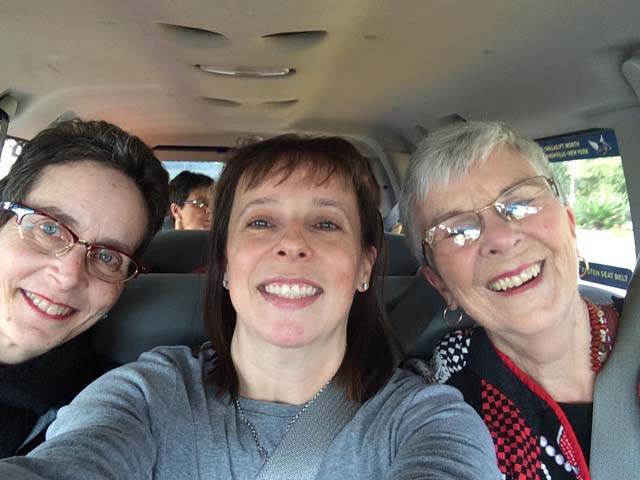 This year I didn’t stay at the Hilton attached to the Convention Center — I decided to venture out to the Hyatt. There’s a bus that runs between several downtown hotels and the Convention Center during Festival and I thought I would give it a try. I was really excited about all of the restaurants around the Hyatt — until I went out that night for dinner and realized that they ALL closed at 2pm. I did get to walk around downtown some — and there were lots of banners welcoming the quilters to Houston. 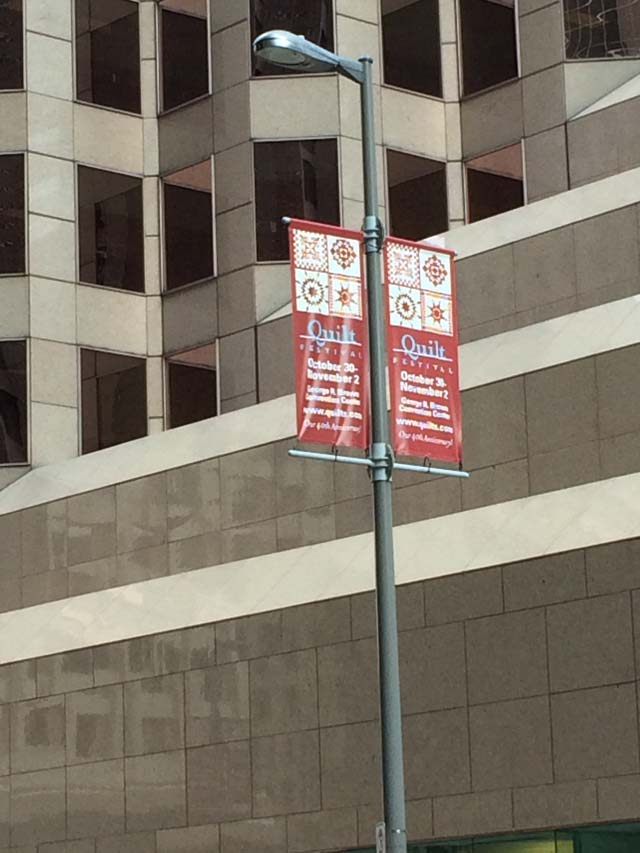 At least the Hyatt has a 24 hour Einstein Bagels — it was my saving grace on several days. After choking down some chili early in the afternoon, I headed out for the bus to go to the Convention Center for the Winner’s Circle.

I stood in the Winner’s line behind Hollis Chatelain and Sheila Frampton-Cooper. Then a Japanese family wandered over and I remembered that the man, Masanobu Miyama, had won the Mastery of Thread Artistry award last year. After a short and awkward conversation between his broken English and my complete ignorance of Japanese, he told me that he and his wife, Hiroko Miyama, had entered a piece in my category. Knowing that Hollis was more than likely also in my category, I knew at that point that I was probably looking at third place — happily — and wondering how I managed to be invited.

Patricia Smith sat to my left. Her piece Caesar and Me won third place in the Art-Painted Surface category.

Laura Joy sat to my right. I distinctly remember her standing for a second place win but I can’t figure out which quilt was hers (sorry about that). I think she must have given me her nickname.

In the end, Worry did win 3rd place — and I was happy to receive it.

I was in excellent company and am honored to have placed among so many talented artists.

You can see of the winner’s piece on the IQF website here (they’ll keep the 2014 winners up on this page until next year — I think, but it’s a static page so I’m not positive.)

And the Best of Show went to the two women seated in front of me that began freaking out as the Master awards were counted down — Nancy Prince and Lisa French for their piece On This Winter Day. 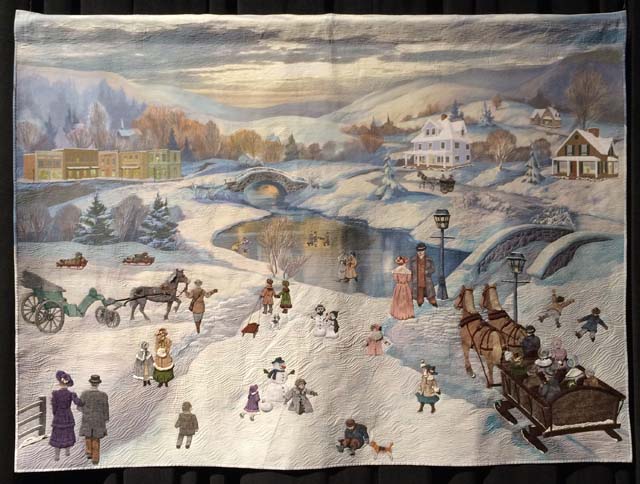 After all of the awards were given out, I met Betty Hahn. We had actually met last year when she won first place for a piece now hanging in Pokey Bolton’s dining room. This year she won Judge’s Choice (Katie Pasquini Masopust) for her piece Escape II. We had such a good time talking about creating illustrative work — and then creating abstract work. We both agreed that we would cause a lot of problems if we lived in the same town. We are definitely twin souls.

Afterwards, I could finally let go of the stress and sleep. I slept for hours and hours.

In another post, I’ll tell you about the Luncheon and then show you some quilts from Preview Night.

This entry was posted by Virginia Greaves on October 31, 2014 at 7:13 pm, and is filed under Exhibition. Follow any responses to this post through RSS 2.0.You can leave a response or trackback from your own site.