« Thanks for the Coffee and Chocolate!
Working Through Fear and Difficulty »

I started this portrait in yellow quite some time ago. I completely fused the front after very carefully following my current methodology, and then hung it on the wall for what I call the “gut check”.

And it failed. Part of the problem is that the main color is yellow and it is hard to develop features with this color. Another problem was my computer. The pictures on the computer looked better than the quilt top. Once I propped up the piece and walked down the hall away from her, her face became a mass with no distinction. The last problem was the initial picture. I realize now that it was a poor choice because it wasn’t helping me much.

And so I bought the fabric for the background and began working on Christmas projects. I even took the background fabric & draped it over the front of the quilt. It hurt to look at it — it just wasn’t right.

Once the holidays were over, I spent some time adding shadows — and they looked completely out of place. I folded up the quilt top and tried to decide if I should just abandon it.

But really folding it up seemed to help. I realized that the entire face needed to be redone in darker hues. I took out the pattern and decided on the line around the face that would be my new beginning point. The fabric at that point was a 3 in the value scale — so I pulled the 4 value fabric and made that the main part of the face. I then pulled a value that I had pulled out of the dyed stack & decided not to use. I used this one because it contrasted nicely with 4. Using a pencil, I then renumbered the values in the face using these other 2 fabrics as reference points.

While I was doing this, I redrew a few lines in order to simplify some shapes. I allowed myself to be less involved with the left side of the brain and let the right side run the process. It became a completely visual experience. 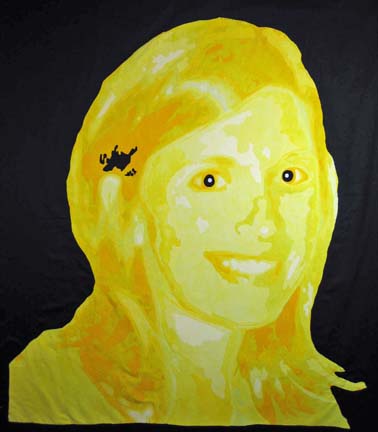 I don’t know how much of her personality it captures but I am hoping that more of that will come through with the quilting.

This is the original photo. Do you think I came close? 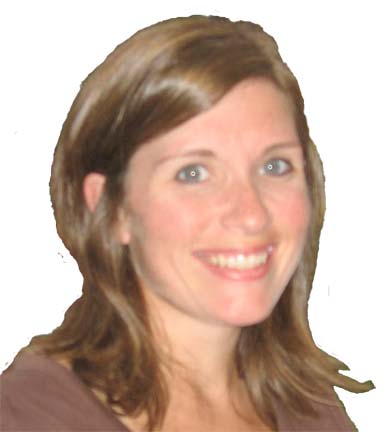 In the end, I need to remind myself that this is art and not intended to be a reproduction of the original photograph. There has been a lot of discussion on the quiltart email list about illustration and its merits. I think that I was greatly influenced by Wayne Spradley. He is a famous watercolorist that lives close by, and I took a class from him a couple of years ago. He is a master at offering suggestion of a shape and allowing the brain to fill in the rest. It would not be as engaging if he added all of the details, for example, of a person in the background, and yet the suggestion has to be just so in order for the brain to become involved.

This entry was posted by Virginia Greaves on January 16, 2008 at 12:13 pm, and is filed under Design. Follow any responses to this post through RSS 2.0.You can leave a response or trackback from your own site.