Working Through Fear and Difficulty

OK. I received a bunch of really helpful feedback from some of the members of quiltart. It is so helpful to belong to this group (www.quiltart.com). Constructive criticism can be hard to come by since I don’t have a creative outlet — and it is difficult for painters to understand the limits of fabric as opposed to paint. It is true that I could have painted the quilt top to make changes — but I am not a painter. I am more of a collage artist — in fabric. My mom, a fantastic painter, has been wonderfully supportive over the years, and her comments, for the most part, are helpful. However, she inevitably says that I have to have a specific color — which I don’t have and don’t know how to dye. One day I’ll get to take Carol Soderlund’s class and I’ll be able to dye anything — but at this point, I recognize my limitations.

So I read all of the constructive criticism and started thinking. I was so dead set on using the black — so I decided that I probably needed to let it go. It sets off colors so well, but it just wasn’t helping me with the bright yellow. Someone mentioned using an olive green instead — which was kismet since I have a great olive green sateen in my collection that I had been thinking about.

Someone reminded me that the values were all light & middle — which led me to an exercise I should have thought to do on my own which is to take a picture of the piece into Photoshop & remove all of the color. It fell flat. My darkest yellow just wasn’t dark enough.

I decided to go into a dark yellow orange for the shadows since that is what is next on the color wheel — rather than introducing a contrasting color. This is really meant to be a color study of yellow — and I have learned a lot. When I made the pink quilt, I had to go into red, so it only made sense in this series for me to include orange in the yellow range.

Perhaps the most fascinating realization was that orange worked best for the eyes. Thank goodness you can peel off fusing as you go along — and I have peeled off many sets of eyes on this one. Really, if the eyes don’t work, the whole thing falls flat. Someone made the interesting comment that I should look at the eyes of lions — that they are yellow and match their manes. Beautiful — but they are rimmed in black which didn’t work here, but I realized that it was really OK to not use black.

When I stepped back from the piece, I finally started to see Amy peeking back at me. When I get that feeling, I think that I am getting close. 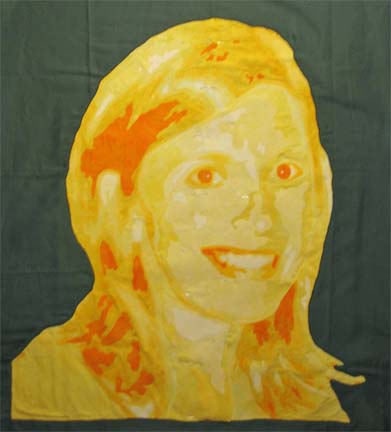 Following the progress of this piece wasn’t intended as a documentation of failure, but I suppose in following the ups and downs of the piece, it is easier to learn about what can go wrong. I have never been one to accept defeat easily, but I will say that this yellow piece almost got me.

This entry was posted by Virginia Greaves on January 17, 2008 at 4:54 pm, and is filed under Design. Follow any responses to this post through RSS 2.0.You can leave a response or trackback from your own site.