Taking Care of the Little Details

Now that I have it constructed & de-constructed, what more could there be? Well, it occurred to me that it might be cool to add a drop shadow to the pieces — to give the illusion of the plate pieces on the surface of the table. I really had no idea how to do that. It’s easy in Photoshop — well, in the latest version it’s in a new place, but it’s just a few clicks away once you know where it is. And in Photoshop, it is a fairly subtle illusion — I’m limited by the solidity of fabric to create my illusion — which is more solid than scattered pixels.

It occurred to me that I could take a small lamp (I used a rabbit lamp from one of the kid’s rooms) and lift each piece to see where the shadows would fall.

Then I marked each piece with a blue line on the sides where I wanted to add a shadow. 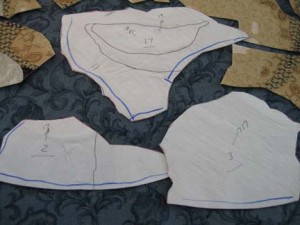 Then I carefully lifted the paper backing from each piece — and used that as the template for another fusible template for only the lines I wanted to shadow. It didn’t need to be exact — this is about creating suggestion — and I only needed 1/4″ or so to tuck under the larger pieces.

Here you can see all of the pieces with their shadows — except it is on a flat surface & a little hard to see at this angle. If I were taller or my table were shorter, it might have worked, but I wanted to have a better angle for judging where all of the pieces would ultimately sit on the background. I took masking tape & lightly taped the pieces to the background — transferred the whole thing to my design wall — and then replaced the tape with less obtrusive pins. 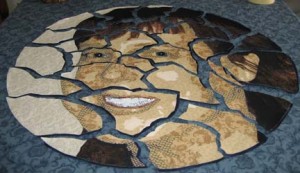 This next part is more maddening than I expected. There are a lot of different looks you can get depending on the space between the pieces — and all of the pieces are interdependent so if you move one, you have to move several. At one point, I put them all tightly together so that I could regain the relationship between the pieces because I don’t want to entirely lose that when I pull them apart.

In this incarnation, I pulled the head pieces a little more askew & out. Unfortunately, because I used a variant of white in the circle portion of the portrait, it created a piece that then pointed outside of the piece — which is not the direction I want the eyes of the viewer to go. 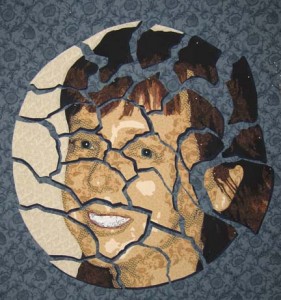 I think that this is what I’m going to stay with. It shows all of the pieces still in relation to each other without any one piece wandering off, and yet the pieces are still distinct and apart from each other. 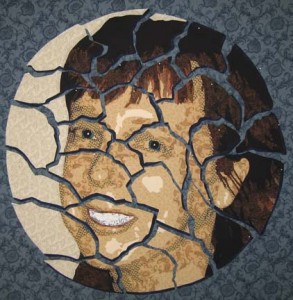 I like the effect of the drop shadow. It isn’t overly obvious that it is there, but it creates a depth in the piece that wasn’t there before.

This entry was posted by Virginia Greaves on January 28, 2010 at 2:52 pm, and is filed under Design. Follow any responses to this post through RSS 2.0.You can leave a response or trackback from your own site.