I lost my blog yesterday — an experience I don’t care to ever repeat. It was running really slow so I added a 5 star add-on called WP Tuner. After I activated it, I learned what the white screen of death is. It’s a little like the blue screen of death you see sometimes in Windows. It means that your blog has disappeared. No error messages — just nothing.

I can say that I learned a lot. I learned how to access phpMyAdmin on my hosting server and change settings in the raw code. I restored all of my database files from a backup, deactivated all of my plugins, and changed to the default theme. Still gone. I finally went back into my history files to find the WordPress page from which I had found WP Tuner — and although it had 5 stars, as I scrolled down, I found that it was considered “broken” in WP3.0. Reading on, I found some discussion that led me to the realization that this plugin had changed my wp_config.php file. I went back upstairs to my clunky PC that I keep just in case & looked at the php files on the server. There was a new wp_configPCTuner.php file (something like that) — so I erased it. There was no mention in the wp_config.php file — but the site still wasn’t working, so I uploaded the copy of the file that I had stored on the PC from my original install. Finally — it worked.

What a nasty plugin. I have to be much more careful in the future. It made me worry about putting the entire website in WP. I’ve loved WP & have wanted to move away from Dreamweaver — but Dreamweaver really saved me yesterday.

On to my original intent for posting . . .

I was scanning prints into my computer recently and found an extraordinary picture of my sister-in-law. It was taken at Christmas almost 10 years ago, and she had just received a beautiful black cloak. She has red flowing hair that is very striking against the black, and the picture of her taken in the side garden of our old house captures her personality in such a striking way.

This is the first value layer — not much to see — the white muslin that I use for a base with a few shapes in a light value.

This is the 2nd value layer — you begin to see a little more contour in her face. You’ve got her nose — her chin — suggestion of her cheeks. 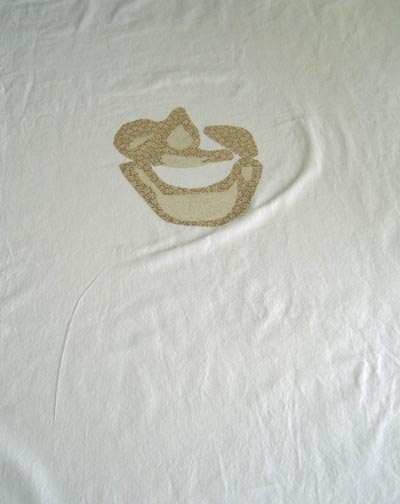 Then the 3rd layer — now she really starts to come out. 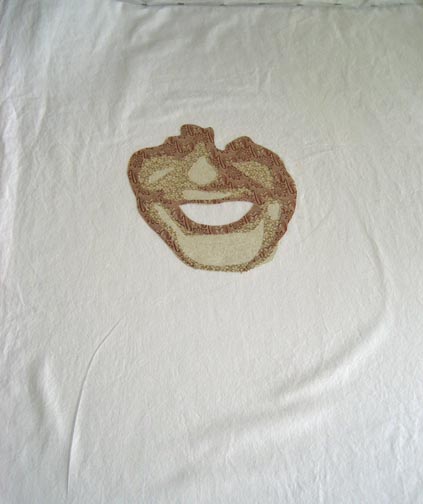 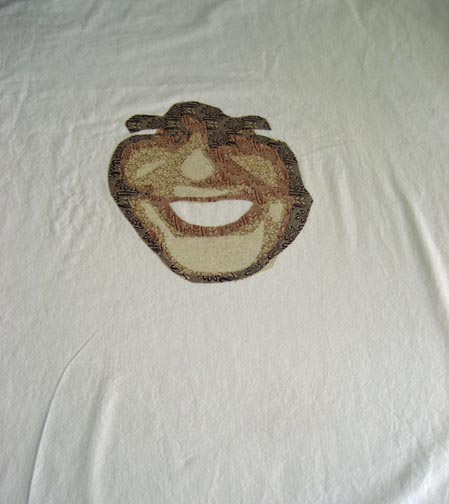 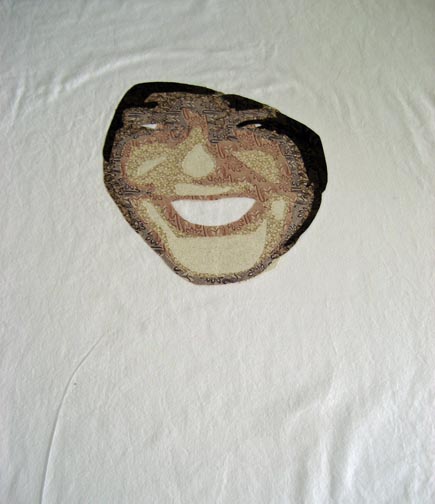 This one shows the problem I was having with her eyes. She has light green eyes — but that would be lost in this picture of her. Too light and yellow on the left — too dark on the right. 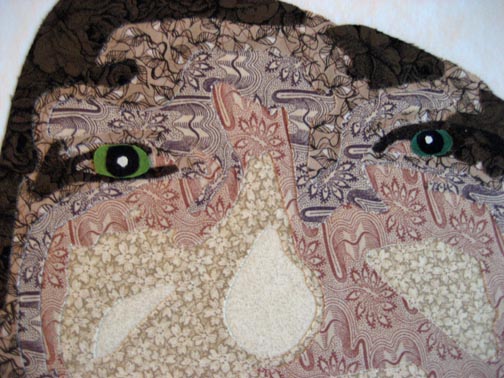 This is her with her teeth and the eye color that I chose. The eyes look really strong up close — but make sense once all of the values are on the wall and you step back. The mouth was fun — this is the first time that I’ve shown the inside of the mouth — just a little peek.

Also eerie about this is that it is just the face — so at this point, knowing the family as well as I do, I can see other people in the family peeking out at me, not just my sister-in-law.

Her face is also shadowed in an interesting way. This will make more sense when the cloak is added around her face. 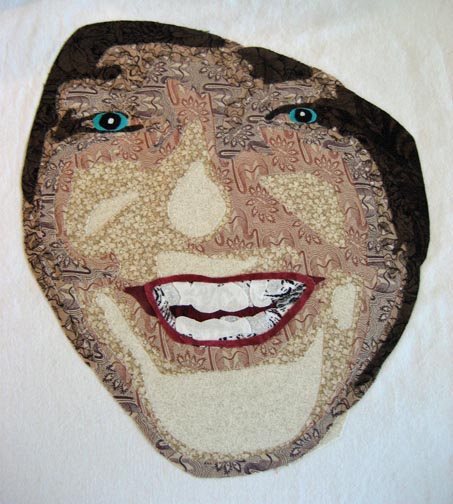 I started her hair with a very brash orange. The more I looked at her picture, the more I realized that I needed more of this color — and I ended up using this for value 1 & 2 in order to get enough of it. The darker colors are nice — but the bright orange is needed for the highlight. It will make more sense in a minute. 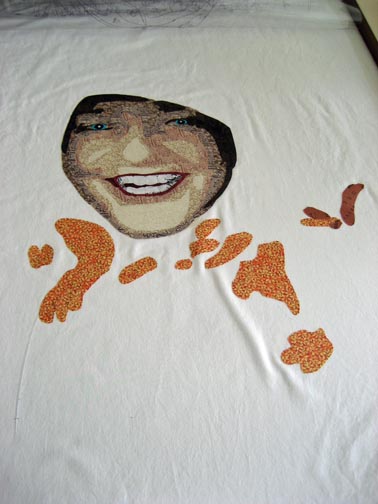 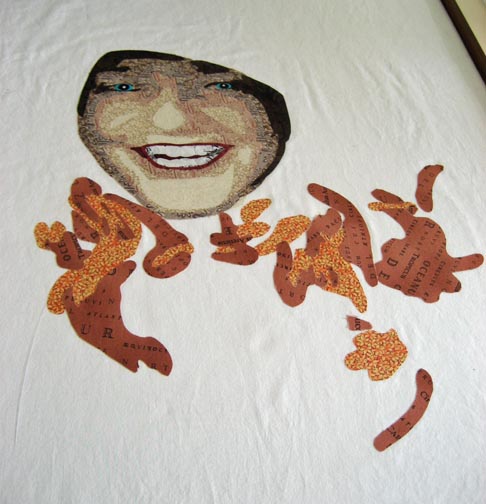 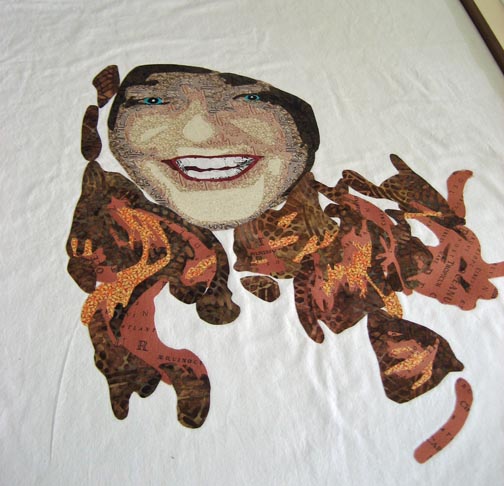 For her, a lot of the effect is the hair.

And then the cloak. The top of the cloak is the lightest as that is where the sun is hitting her. There is still a blank edge around the rim of the cloak. I had to figure out a clever way to show the braid on the edge. 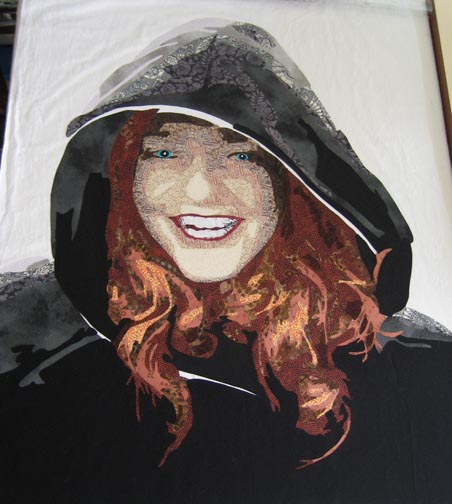 I decided to use a black stripe cut on the bias that I could manually curve around her face. Most of the black stripes I found were black & white — too much contrast — but I found this homespun with black and neutral tan/taupe that seems to work fairly well. I cut it wider than what I needed — and then ironed it down as I curved it to fit the line I needed — but I just ironed it down a little on that one side. Then I went back and cut the opposite side to match the other line. I took artistic license in getting it where I wanted it to be. 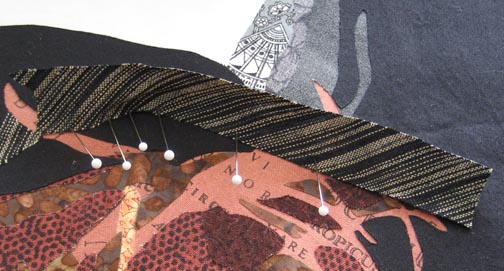 In the end, I think you get that feeling of the rolled edge — and the neutral in the stripe doesn’t shout. 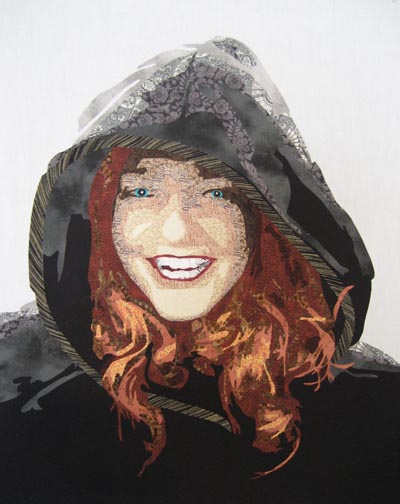 I also added a green background which I’ll show later. I’m working on the applique now.

This entry was posted by Virginia Greaves on October 14, 2010 at 3:49 pm, and is filed under Admin, Design. Follow any responses to this post through RSS 2.0.You can leave a response or trackback from your own site.