« Celtic Woman
Forget What Lies Behind You »

I finished my latest piece, Celtic Woman, on Friday, just in time for the end of the month. I had it blocked and drying over the weekend — and thought I could take a quick picture of it today and be done with it and on to the next project.

I took a couple of rounds of pictures, and none of them were right. They were all a little blurry in the middle. I finally decided that the high contrast was causing a problem with the camera. I had a similar problem a few years ago with a piece I made called Ama. It is a very light portrait (my 1st person so judge me kindly) with a very dark background of blacks. The black has very intricate feather quilting using a heavy metallic red thread. I found that I could take a picture that focused on the portrait — and the picture blurred out all of the feather quilting details — or I could focus the camera on the black to get the quilting detail and the portrait would be blurry.

At that time, splicing two photographs together — which is what a professional photographer would do in the dark room and we can now do in Photoshop — was not considered an acceptable practice. Guidelines for the big shows were very explicit that you could not make any digital changes to the original shot — which made it a quilt that I couldn’t enter into a judged show. It also taught me a lot about the boundaries of a camera. I always expected the camera to see something just as I saw it with my eyes — and that is not always the case.

So when I realized that I had a similar problem with Celtic Woman, I started playing with the manual settings on my camera. I finally found that if I used spot metering instead of weighted average, the camera  would give me a clear image of the face but underexpose the cloak. I could compensate for that in Photoshop, however, and that is how I finally got what I believe is a good representation of the quilt. 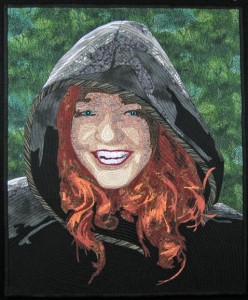 You can see a bigger picture of it and a detail shot on the website here.

This entry was posted by Virginia Greaves on November 1, 2010 at 12:40 pm, and is filed under Photography. Follow any responses to this post through RSS 2.0.You can leave a response or trackback from your own site.