« How to Fly: Finished
Laboring in the Georgia Heat »

More Than One Way to Fly

There is certainly more than one way to fly and I found that I was not quite done working on the theme for this impending exhibit Taking Flight. I’ve covered a bird & Amelia Earhart — but I decided to have some fun making three dimensional hot air balloons.

Coming up with a pattern wasn’t so hard. I found a place on the web for making a very large one for a paper balloon. I used the math, scaled it down, smoothed it out, and this is my paper pattern.

I took eight of these & taped them together to see if they would work — and they do. I’ll be making my balloons with a Peltex layer for stiffness — but it should be similar to the paper. I think it was Jamie Fingal’s blog where she made a sculpture from paper & then used that as a pattern to make her fabric pieces. It’s actually simpler than you would think — working with the paper — & if it doesn’t work, you trim or substitute another piece — or throw away & start over. 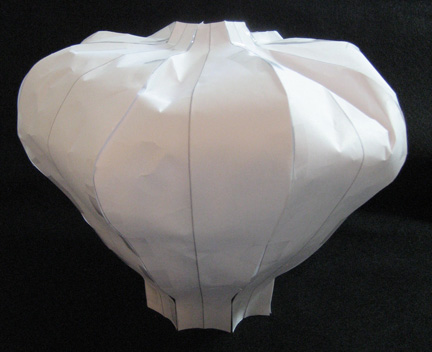 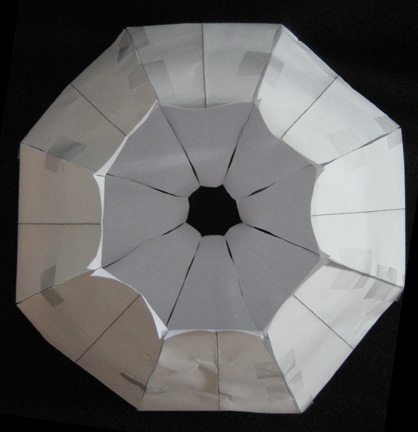 So I sewed strips together for the first balloon & fused them to Peltex stiff interfacing — then I sewed down the middle. I didn’t worry about the back since it will be inside the balloon. Then I outlined from my pattern and cut them out. It was easy on the yellow — I used the center half of the pattern to line up with the crease between the yellows — but when I started sewing the next balloon in blue, it was easier to mark on the back with a pencil on the Peltex & use the quilted line as a guide for the middle. 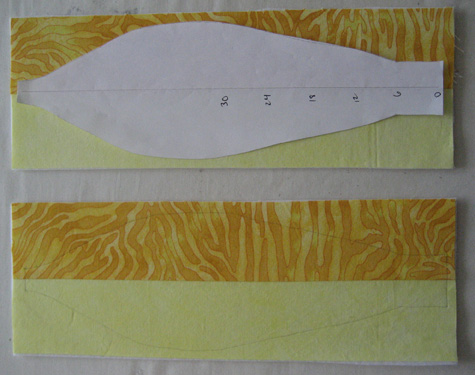 Once I had eight pieces, I zigzagged with a matching thread on the tops & bottoms — the 2 shortest sides. After that, I lined up pieces wrong sides together and zigzag stitched pieces together on the long sides. Two wasn’t difficult, four wasn’t bad, eight was a challenge.

The yellow & blue ones were easy — and then I made the rainbow with vertical seams. Then I found a great red stripe fabric with the stripe on the bias — perfect for a chevron — but it would have been nicer if I had bought enough to make the entire balloon. Mistakes happen. I pulled a similar stripe from my stash, cut it on the bias, and made it just like the yellow & blue ones.

Right now I’m making a more vintage one with cream & black stripes (4 stripes on each panel) on the bottom & a vintage check on the top. Odd numbers are good — five would be a good place to stop — if I didn’t have another one lined up. I have a great blue & gold Renaissance fabric that would look cool if I fussy cut the panels.

I found out this week that my blog was included in Quilter’s Home list of Top 55 Blogs. Really — little me. I was shocked — and pleased — and excited. I think this is worthy of a happy dance.

If you don’t believe me (I was skeptical too) or want to see the rest of the list, it’s here.

This entry was posted by Virginia Greaves on June 15, 2011 at 12:20 pm, and is filed under Admin, Design. Follow any responses to this post through RSS 2.0.You can leave a response or trackback from your own site.