We had the opening artist’s reception last night for Taking Flight at The Art Place Gallery in Marietta. I think my favorite part was when some traditional artist friends of Rebecca’s came and they got so excited by the work. They were truly inspired by what they saw as a new level of expression. I know that fiber art is growing, but there is still of lot of work to be done in the Southeast — to draw the art of the quilt beyond the bee’s of Southern grandmothers. I plan to enter more traditional art venues in the Southeast — beyond traditional quilt venues — and we’ll just have to see how it goes.

The Art Place Gallery is a small space, but it is more forward thinking than many other galleries in regards to fiber art. We are blessed that they give us the opportunity every year to show our work in their gallery.

For those of you that won’t make the trip to Atlanta in the next couple of weeks, I have prepared images of works in the show so that you may enjoy the exhibit. 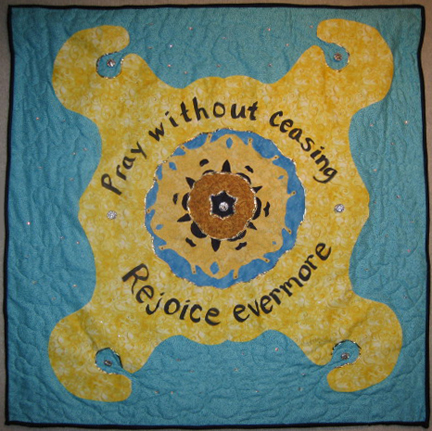 Taking Flight From My Life by Julie Runyon Kokan

Statement: The first week of summer vacation, I went to Greece and Italy with my husband, leaving our four kids with my sister. It has been 7 years (and two kids) since we last left them. I had a stressful year at school last year, and I needed to get away. We went to Thessaloniki, Greece and Rome, Italy, both places visited by Saint Paul. Since my husband was attending a conference while we were in Greece, I was free to wander the streets of Thessaloniki by myself every morning. Since I could not speak the language, let alone read the language, I had a lot of time with just my thoughts, and thinking about Saint Paul, as my dad put those thoughts in my head just before I left. Then I went to Saint Peter’s Basilica in Rome, where there is a statue of Saint Paul. It was a very spiritual experience for me. This piece is my impression of Saint Peter’s Basilica. 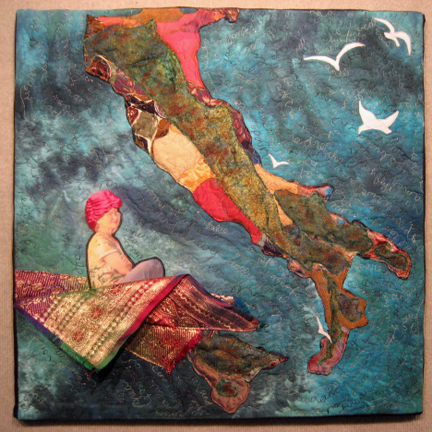 Statement: Only once have I flown on a magic carpet–on my way to some unidentified dreamworld destination.  Lately, when I wonder why I feel compelled to create, I think I may be living part of the life my uncle had planned. He died at 18 in a plane over Italy in 1944. He wanted to be a cartoonist. 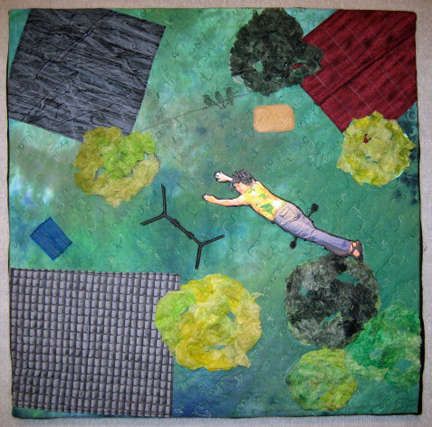 Statement: As a child I was sick much of the time and I filled many of those home-bound hours listening to the Disney version of Peter Pan. I never wanted to grow up either and I longed to fly. In my dreams I could rise above the houses and  yards and float unseen. Sometimes I still can. 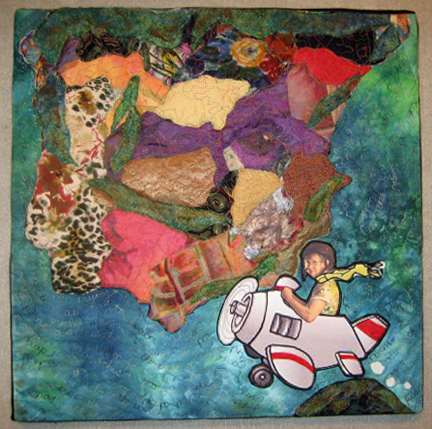 Statement:  In most of my flying dreams I am trying to get to Spain, although “why” remains a mystery. Usually I am racing to get a ticket for a commercial flight, but sometimes I fly a tiny, funny, wind-up plan. What a rush of freedom and adventure!

Statement: This piece features 31 ribbon butterflies displayed in an exponential growth pattern as you go down the piece. As a math teacher, I am always looking for ways to cross math and art because using different parts of the brain together creates better understanding. If you start with the one butterfly at the top, it doubles each time you go down the panel, ending with sixteen butterflies on the bottom part. 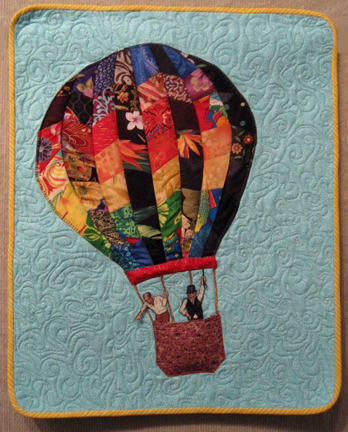 Up, Up and Away by Ben Hollingsworth

Statement: This balloon was made from extra (mistakes) from a paper-pieced piece that I made for the Olympic Quilt Project 2012. 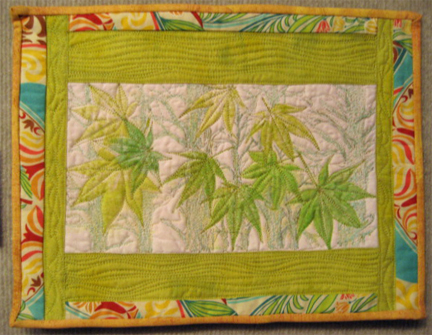 Fall: With a Spring Kind of Attitude by Ben Hollingsworth

Statement: After a guild presentation on stamping on fabric my bee group (the WannaBees) decided to dedicate one of our meetings to stamping on fabric. I finished quilting the leaves and needed a background. The next day I attended a workshop with Nancy Prince on thread painting. I used her technique on the background trees. 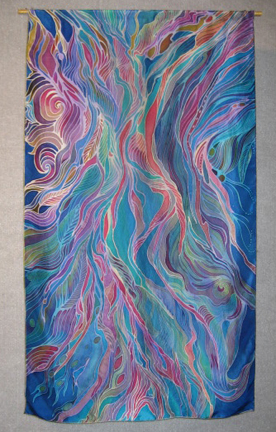 Statement: I created this piece to convey a sense of expansiveness. The snowy mountain peak juts out above the cloud layer, and the eagle flies about in his own personal Elysium. 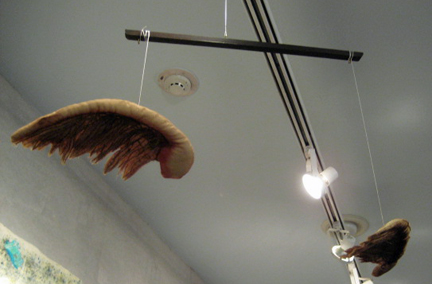 Statement: One day while walking, I notice this incredible wonder and the idea for this piece was born.

Highway to Hell I by Deb Lacativa 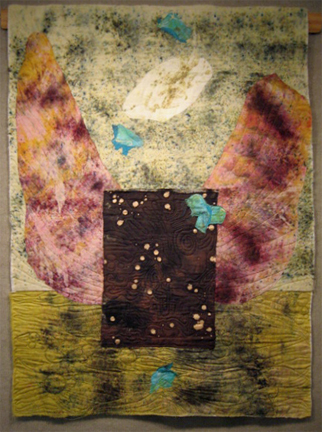 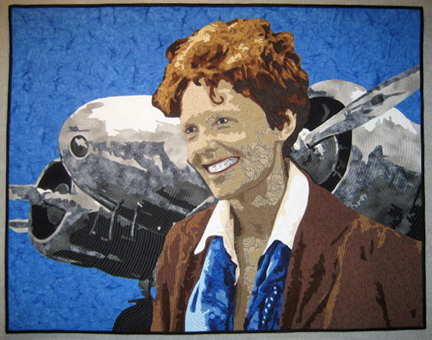 Statement: “The most difficult thing is the decision to act, the rest is mere tenacity. The fears are paper tigers. You can do anything you decide to do. You can act to change and control your life; and the procedure, the process is its own reward.” — Amelia Earhart 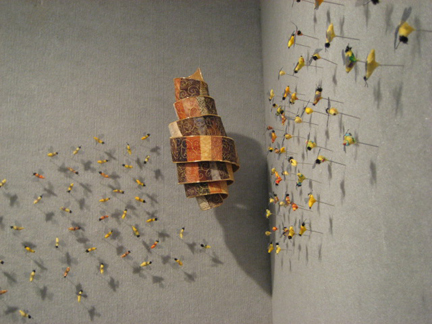 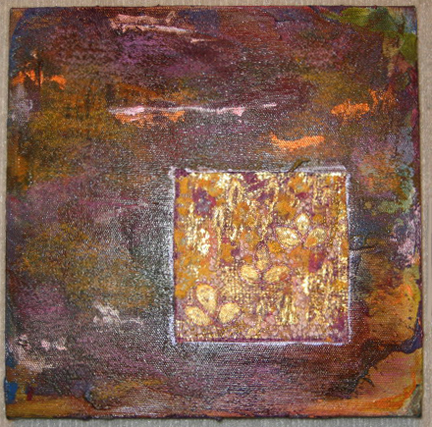 Statement: This piece was actually inspired by a container flower garden.  Sitting amidst several other plant-filled containers sat an amazing combination of various flowers and textures.  At first it was just the smaller stitched mixed media piece but as I tried to decide the best way to display the piece, I kept remember my initial impression of this one unique container. 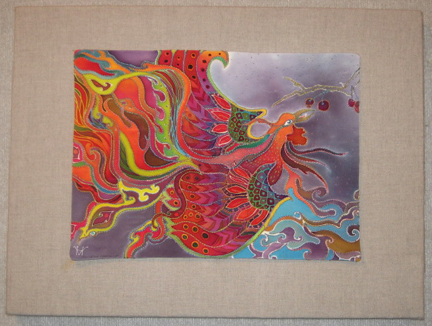 Statement: Last year, I purchased a cabin in the North Georgia Mountains.  The region inspires me a hundred times a day.  It has brought back to me the capacity to see with “new” eyes.  Sitting on the deck at night and viewing the clear sky away from the bright lights of Atlanta has become one of my favorite pastimes! When I made the decision to focus on one design theme to create a series of work, it was the clear choice for a subject.  The aim was not to create a single large piece, but instead to generate variation on a theme with an emphasis on design creation.  It has been an incredible progression as I started with the obvious symmetrical designs and slowly moved to designs that obscuring the star until it isn’t always apparent what the source of the design was.

Statement: The quiet grace of hot air balloons allows a view of the world altogether missed through the speed of other air travel.

I only got a couple of pictures of the artists. This is Sharon Serrano Ahmed & Julie Runyon Kokan. 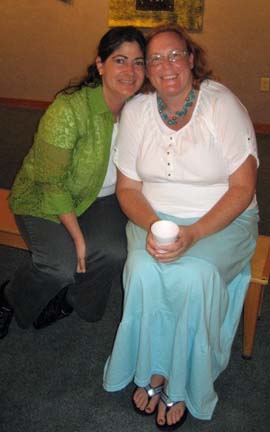 And this is me sitting between them.

I have 3 proposals waiting for my consideration so it’s time for me to look forward. Most of the exhibition opportunities that I consider come at this time of year, and this is turning out to be a busy year.

This entry was posted by Virginia Greaves on July 15, 2011 at 5:44 pm, and is filed under Exhibition. Follow any responses to this post through RSS 2.0.You can leave a response or trackback from your own site.