It’s What’s In the Background

As good as my figures look on my design wall, it isn’t their final home.

First I have to make them dresses. In the photograph, they are wearing red toile dresses — so I attempt to use a pink — which doesn’t work well with the red in their faces. In fact, she washes out entirely. I abandoned this fairly quickly. 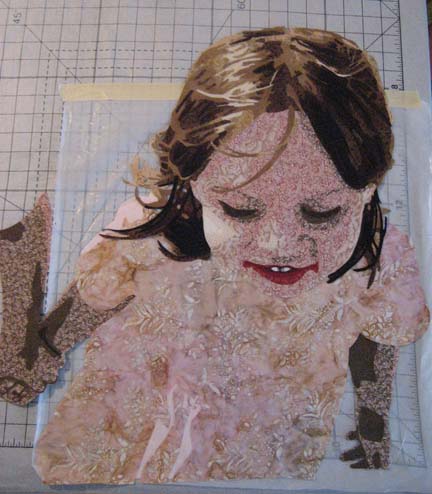 I ended up using a seafoam green that evokes the color of the sea. This is what they look like pinned on my black design wall. Black makes everything look good. But I can’t always have a black background — these are children at the beach — not hanging in space. 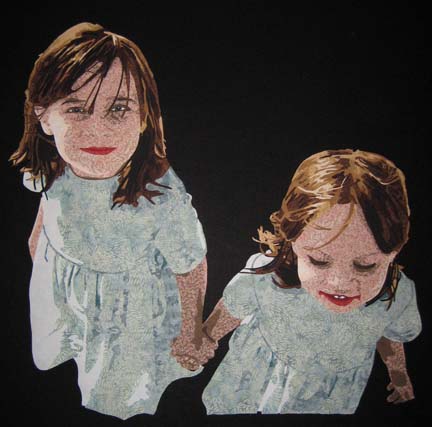 The background . . . what to do for the background. At first, I buy a patterned fabric that I think will work well as a stand-in for sand — but it just looks so plain. Also, for the size of the figures, the pattern isn’t nearly large enough.

So I spent Thanksgiving break thinking about what would be best — and I opted for something abstract — and pieced — which is not like me at all — but it seemed like the best idea for this piece. I pulled about 12 fabrics in shades of white, gray, and khaki, cut them into 2 1/2 x 6 1/2 strips (finished 2×6 — which is a golden ratio) — and pieced them into strips from which I create the background. 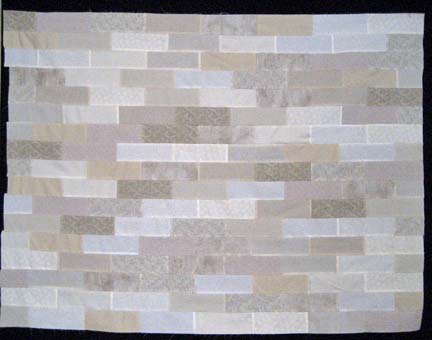 And this is where the beauty of my new fusing system begins to come together. I can make the background completely separate — and then fuse the pieces in small groups.

The tricky thing about fusible is that if it is on a printed fabric, the fusible doesn’t bond well with the fabric. As you twist your project under the needle while appliqueing, the pieces will start to separate from the background, and it becomes a race to finish before you lose too many pieces. With my new system, I can create a larger and more complex piece without having to worry about too much moving around or coming off.

I started by just adding the arms. I fused them down and then appliqued them. 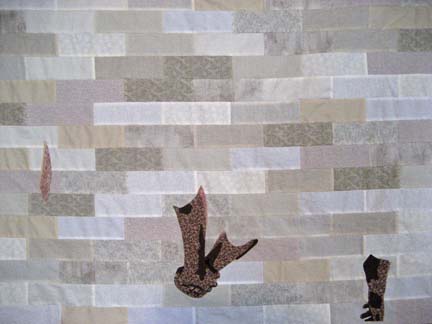 Then I fused down a dress — and appliqued that down as well. 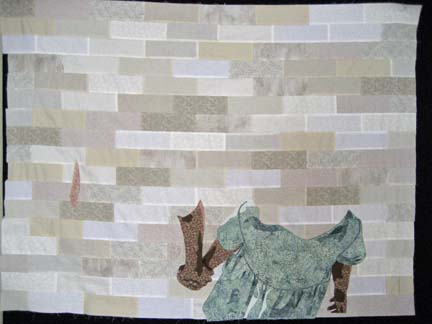 The second dress is done after the first. 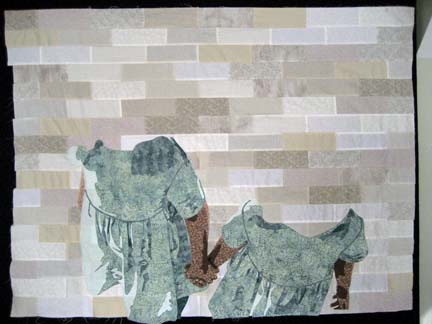 Headless children! No really — I have their heads done — they just aren’t sewn onto the piece yet. I am almost finished adding the head on the first piece. The second will not be finished until after Christmas.

This entry was posted by Virginia Greaves on December 9, 2011 at 3:28 pm, and is filed under Design. Follow any responses to this post through RSS 2.0.You can leave a response or trackback from your own site.