With the children back in school, I spent all of last week finishing the appliqué on the 2nd figure and preparing the quilt sandwich.

After that, I always stumble. The blank canvas is daunting, and quilting is difficult to undo.

One of the criticisms of Just Call Me Jack that I received from a judge’s sheet from IQA Festival was that they found the quilted circles in his face distracting. 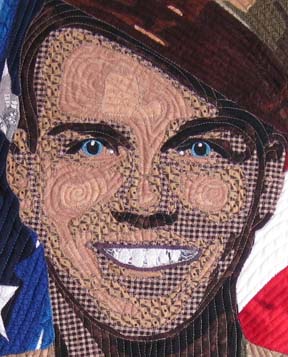 Knowing how to quilt the face is a hard thing. There are no rule books and many people try to avoid adding quilting lines to the face because they think it makes the face look wrinkly. However, an unquilted face sags over time, especially if the piece is closely quilted around the face.

I’ve had several people ask if I follow the muscles. The answer is yes and no. Our faces are not just muscles – we have more character than that. I use curves, swirls, and combination lines to fill in intersections. So I take instruction from the muscles but I’m also trying to give the impression of depth in the face.

But I wanted to see if quilting the lines strictly according to the muscles was a better option. I’m open to change. I need to grow in my work, so I took out my pencil and made a sketch on a picture of the appliqué so I could assess that as an option without having to commit it in thread. 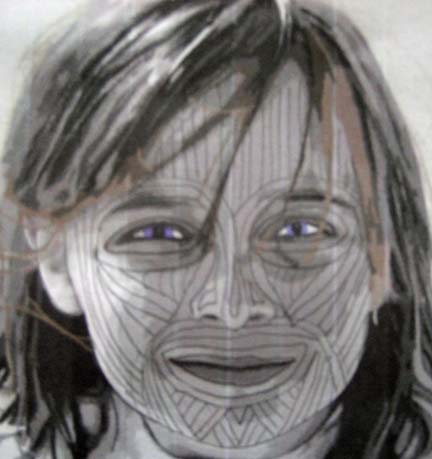 To be honest, I’m not thrilled with it. This is more what I would do.

. . . And I like it better. The first is too choppy for me. I think faces need to have more flow. And I like the swirls. They give an impression of where light hits the outermost parts of the face — the cheeks, the chin, the nose, and sometimes the forehead.

For now, I like my style. Both of them seem reminiscent of face painting in ancient cultures, but the effect in thread will be more subtle. To me, quilting can give the illusion of things — take over where the appliqué stops. I’m working more with suggestion than is obvious upon first glance. The appliqué doesn’t always give you the needed visual clues — sometimes the quilting lines take over and finish the job.

This entry was posted by Virginia Greaves on January 10, 2012 at 11:16 am, and is filed under Design, Drawing, Quilting. Follow any responses to this post through RSS 2.0.You can leave a response or trackback from your own site.