Etta James died today. I’m listening to her song At Last — I don’t think anyone else can ever do this song the justice that she does. Here’s to everyone feeling as happy as Etta obviously was when she sang this song.

For the past two weeks, I have been quilting away on my latest piece. If there is one thing that I’m probably not very good at — it’s quilting. I don’t have a stitch regulator (but I don’t want one).

My greatest fear comes when faced with quilting one of my pieces. It’s the hardest mental block for me.

After quilting the faces and figures, the background is always difficult for me to figure out — especially an abstract like this one. I wanted to use something that would be provocative of how the water pools in the sand at the edge of the ocean.

My favorite place to go for inspiration has become Leah Day’s site The Free Motion Quilting Project. She has spent over a year coming up with a new and fresh quilting idea every day. Literally. She takes a small square and brings it to life with her stitching. She doesn’t have a large quilting machine — she doesn’t have a stitch regulator (at least I don’t think so) — but she has a home machine, a camera, and desire. Watching her stitch reminds me that quilting is about confidence. Yesterday, I didn’t have enough and I broke my thread countless times. Today, I was on a mission to finish and I quilted an incredible amount in a small amount of time — and I broke the thread only twice.

I started with Leah’s pattern called Mud Flats. I liked it on the drawing . . . 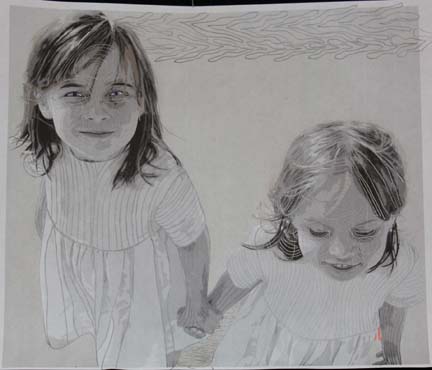 . . . so I started quilting in the lower left hand corner.

Luckily this pattern is forgiving with fullness. 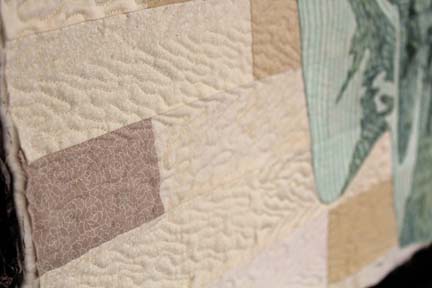 The rule in quilting is that you quilt from the outside in. No matter how much you smooth out the top when you pin it though, if you quilt something densely, it will stretch the cotton fabric enough to create a ripple. Sometimes you can quilt through it — and sometimes it’s best not to try.

I will confess to something. When I’m quilting a large complex piece and I’m done quilting the figures, I move the pins on the background, smoothing the fullness out to the edges. I know you’re not supposed to move the pins once they’re in — but I’ve found that I can save myself some headache in quilting if I will move the pins one at a time and smooth out some of the ripples that tight quilting have created.

This quilt was a challenge because I couldn’t quilt from the inside out. I quilted the heads/hair independently — and then I quilted the left arm of the left figure, the left figure’s dress, the interlocked arms in the middle, then the right figure’s dress and her right arm. I still ended up with fullness between the figures that I had to contend with when I started quilting the background. The space just under the holding hands was the hardest. Because of the position of the figures, most of the fullness could not be pushed out. Short of quilting it first, I’m not certain what I could have done differently to have avoided the fullness in this area.

This entry was posted by Virginia Greaves on January 20, 2012 at 5:34 pm, and is filed under Design. Follow any responses to this post through RSS 2.0.You can leave a response or trackback from your own site.