Sometimes you don’t end up with what you expected. Sometimes the world throws you a curve ball. And sometimes that curve ball hits the middle of your quilt.

I finished my latest quilt over a week ago. I put it in water to dissolve the water soluble glue I use in the binding and to prepare the quilt for blocking. I do not use any soap because I always worry about the blue marking pen coming back through the layers and becoming permanent.

After soaking it for an hour or so, I spun out the excess water and blocked it out with pins onto a design board.

When I went to photograph it a couple of days later, I realized that I had a problem. I always prewash my fabrics when they come home — with synthrapol — or blue Dawn dishwashing detergent which has synthrapol in it (very small amount because it’s concentrated) — in order to take out any excess dye. So it always surprises me when I have a fabric crock. That is one reason I throw in a Dye Catcher sheet when I soak a quilt at the end.

But there it was — the red of the mouth had bled into the teeth — and for good measure, also left a mark at the top of the head.

I washed the quilt again — soaking the mouth & other area with Shout. I also added Borax in the tub. Didn’t work. I applied Shout & Borax again — no change.

So I blocked it again to dry but then did nothing for several days. I considered adding a few swatches of white onto the teeth & sewing them down. If I use a MonoPoly in the bobbin, it’s virtually undetectable in the final quilt. But then someone suggested I use paint. I have fabric paint — I’ve taken classes in which I’ve played with it — but I’ve hardly ever used it in my work — certainly never for damage control.

But it was a good idea.

This is what the teeth looked like before the paint.

And this is what it looks like after. I only whitened the very top portion. The original was not a pure white — it had a little gray in it. I stuck with pure white. I also didn’t touch the patterned fabric in the lower section of teeth. Although the red hint isn’t ideal, we can chalk it up to shadowing. We certainly don’t want it to stand out as much as the lightest shade — it’s best left alone to recede.

This is the top of the head. Missed this entirely when I blocked the quilt. I’m sure it came from the quilt being folded over in the wash tub and this is just the section that was touching the mouth in the water. 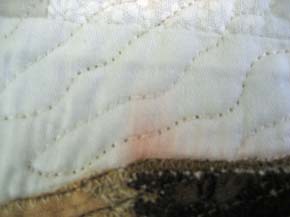 And this is what it looks like after being painted. I used the white but mixed in just the barest amount of yellow since the fabric was a very light cream. 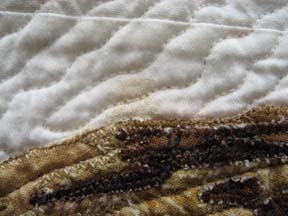 Improvement at least. Sometimes, when you only have lemons, you just have to make lemonade — and move forward.

This entry was posted by Virginia Greaves on February 3, 2012 at 2:08 pm, and is filed under Design. Follow any responses to this post through RSS 2.0.You can leave a response or trackback from your own site.