At some point along the way, I started entering exhibitions far away. My quilts have always traveled better than I have. I always have some trepidation when I drop them at a shipper, but I have know that shipping them is the best way to show them to large numbers of people.

At home, I either store my pieces on the wall or rolled up and placed in a pillowcase. At one time, I only wanted to ship my pieces rolled, but not only were round shipping containers hard to find at the time, the shipping charges were MUCH higher. My more conservative nature took over and I learned how to ship my work folded. Even though I quilt my pieces tightly, 1/4″ apart or less, folding them for a couple of days in this way does not cause drastic wrinkles.

This week I was shipping Lincoln and The White Raven to IQF: Houston. I have small boxes for one quilt, but for two, there is a great box at Staples that is 14″ x 14″ x 14″. The depth is too high — but I can cut the sides of the box down to 10″ — and this particular box all ready has crease marks at 10″ — so it’s a very easy adjustment to make and I don’t have to fill the box with extraneous materials to keep the pieces from floating around in a box that is too big.

The goal is to fold the piece into a square that is 14″ x 14″. For Lincoln, I laid it out on the floor and crumpled up some tissue paper on the top. 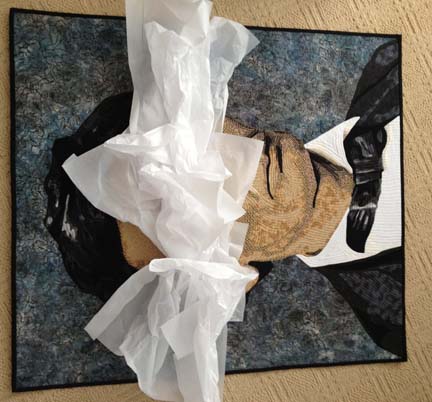 And then I made my first fold — from the top to the middle. I then put more tissue paper in the middle. 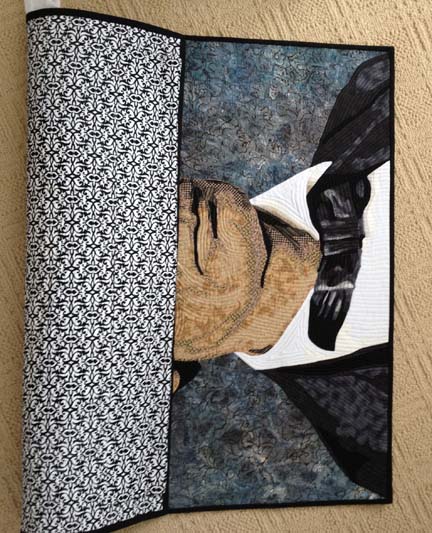 And then made my second fold. This is now just under 14″ wide.

For this piece, I’ll need to make one more fold in the middle so I crumple up more tissue paper in the middle. It doesn’t have to be a lot. The tissue paper gives enough volume that the crease isn’t too small and won’t cause a nasty wrinkle on the top. 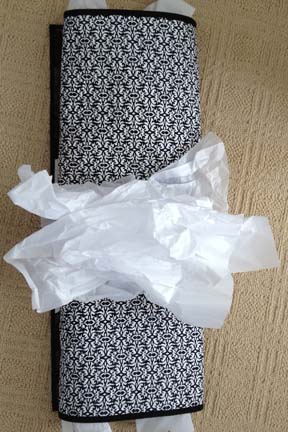 And this is what I looks like when it’s done. I then folded my second quilt in the same way so that I had two squares just under 14″. Some shows ask that you place the work inside a pillowcase with your name and other information written on it and then place it in a clear plastic bag. IQF does not want the pillowcase or muslin — they only want your work in a clear plastic bag.

I keep the plastic bags I get back from shows and re-use them, but if you’re just starting out, you can buy XXL Ziploc bags in the grocery store.

I stacked them one on top of the other and folded the remainder of the plastic bag around the work. They fit perfectly into the box. 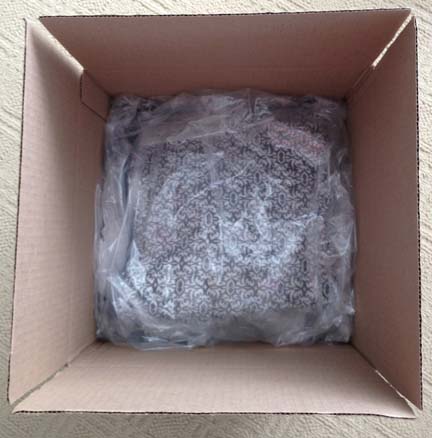 For any show, I always have an envelope. At the minimum, the envelope should have your name on it. Inside I put an index card with my name and other contact information. For IQF, they also have some paperwork that they want included. Since there are two quilts in this box, I have included two separate envelopes. I tape the tops of the envelopes to the bag.

If I close the box as it is, I would have extra room, so I merely cut down the four corners with some scissors. 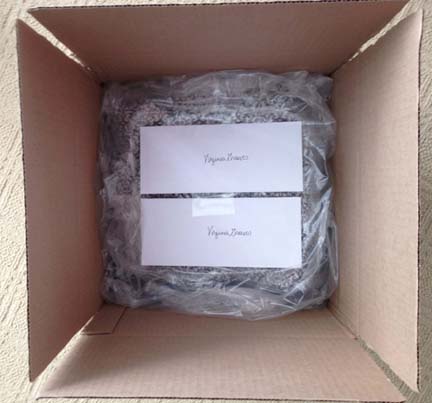 Then I fold the sides over and tape them with clear packing tape — once on the top, then the two sides, then across the top again. (By the way, this is exactly how I tape the bottom of the box as well.)

I don’t reuse boxes. They can be reused to be sent home — but I don’t keep them beyond a round trip. It’s the least I can do for the safety of my work.

I have one more piece going to Houston to be in a special exhibit — Firecracker — but I won’t send that one for a few weeks.

I have had Amelia Earhart accepted into the La Conner Quilt Show — so I’ll be shipping that one out soon as well.

And finally, I have Jacks Are Wild and It’s All Relative (which I’m finishing now) to be included in a local show that Rebecca Reasons Edwards and I are curating. Those two will show in It’s All In The Cards at The Art Place in September and at the SEFAA Center in October.

This entry was posted by Virginia Greaves on August 10, 2013 at 12:21 pm, and is filed under Exhibition, Marketing. Follow any responses to this post through RSS 2.0.You can leave a response or trackback from your own site.