Last night was the opening reception for Georgia Artists at the Abernathy Arts Center in Sandy Springs, GA. I got there just as it was starting and the gallery was empty enough that I could take a few pics of my pieces on the gallery walls without the distraction of people. It’s always hard once there are people viewing the work to get a clear shot. This is Worry. It was just to the right as you entered the gallery. Seeing it hang on something other than my design wall was exciting. There is nothing like gallery lighting to make your work look its best. 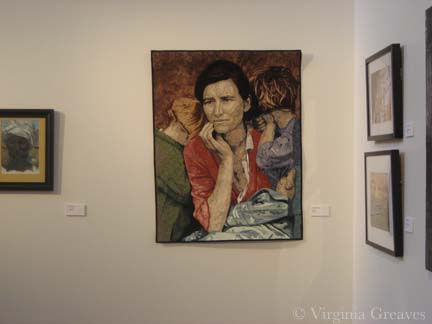 And here is Golden Moment — on the left wall next to the far wall as you entered. I think this is the same place where Beach Guardians hung a couple of years ago. In fact, as I was speaking with the curator later in the evening, I realized that this is the 4th year in a row that I’ve been included in this juried exhibit. 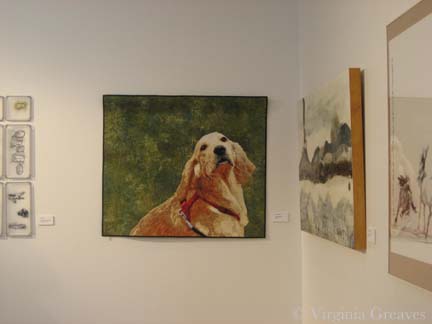 Now keep in mind that this is an ART show — not a quilt show. There were paintings, photographs, sculpture (although a lot less than usual), encaustics, drawings, and many mixed media pieces (more than in previous years). I used to enter in the mixed media category — but this year they added a category just for me — Fiber Arts. I was so thrilled when I saw the entry form. Slowly but surely, Fiber Art is coming to the ATL.

As the announcement of winners was being made, I hung out in the back. I had a woman tell me she loved my piece. I gave her my business card. I expected to be leaving shortly.

But then the curator started talking about the first place winner — that she had been in this show for the last four years. I had a similar light headed moment in Houston when I realized that I had won first place. She was talking about me!

(By the way, I took the pic above with my iPhone. I took the same shot with my camera — but I wanted a quick shot to share on social media — so this one was taken with my phone. I couldn’t believe how much better of a pic it was. The quilting in the background really stands out.)

And here is the obligatory shot of me with the piece. I should have taken one with Worry too — but at this point, there were too many people waiting to talk to me about Golden Moment. 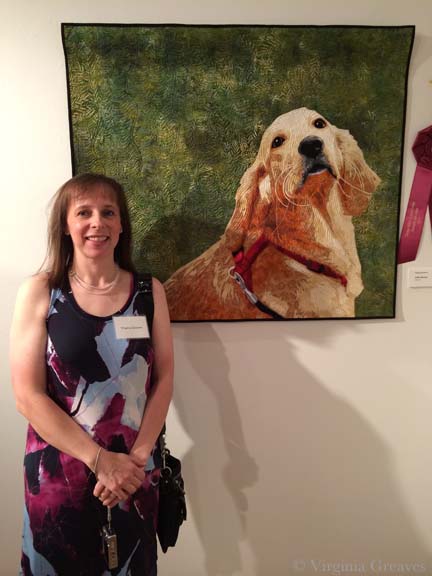 According to the curator, the judge loved both of my pieces and really struggled with which one to give the award to. In the end, he chose Golden Moment because he loves dogs. (Which just furthers my argument that portraits of animals will always be more appreciated than portraits of people because they have broader appeal.)

Last year, I had prepared business cards because I had needed them the previous year and did have them. As luck would have it, I had no-one to give my card to. There wasn’t much interaction with the artists at that show.

This show was a lot different — and I gave out a lot of my cards. I was glad to have them. I met a lot of other wonderful artists. For an artist, it is a dream to talk about your work, your intentions, your processes — and with interested people.

This is me speaking with my sister-in-law. She is a big animal lover. 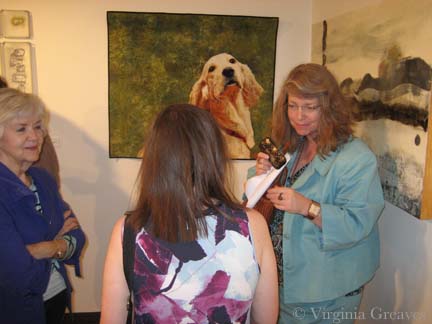 As luck would have it, they put my piece right next to Leisa Rich’s. I’ve known Leisa, mostly on Facebook, for a couple of years. She is a wonderfully talented fiber artist here in Atlanta that pushes the boundaries of what she can do with textiles. Her work is almost always dimensional and frequently sculptural. 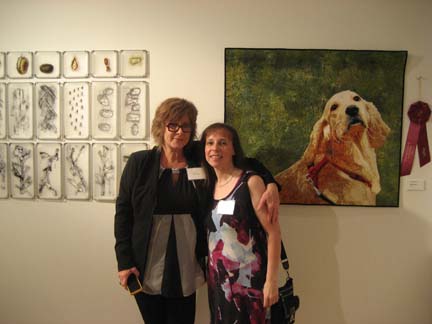 This is her piece — Emerging from Dormancy. It won an honorable mention. She has done a series of these in different color ways — she showed a red version on her Facebook Page that she hung recently in a Buckhead home. She has a black one featured on her website home page. 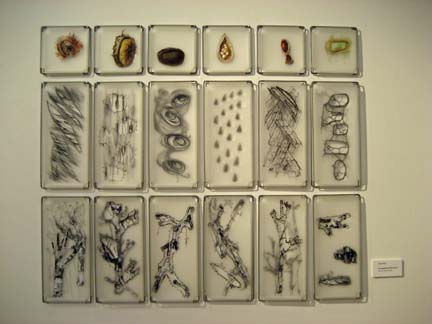 I’ve called on Leisa many times for advice. She is one of the few artists I’ve found in Atlanta that is serious about her work, considers her art a profession and herself a professional, and knows a lot about the business of art.

I had a great time. My cup runneth over!

This entry was posted by Virginia Greaves on May 3, 2014 at 7:50 pm, and is filed under Exhibition. Follow any responses to this post through RSS 2.0.You can leave a response or trackback from your own site.