Everyone dreams of having the perfect studio. Lots of room — lots of light — and wide tables. For our sewing machines, we want an inset for the machine with acrylic around the base, and hopefully space to the left and back of the machine to bear the weight of what we are working on.

I set up my first “studio” in the guest room. When I bought my first machine, a Viking — Lilly, I think — I also bought a Koala Cub to hold it in. When a guest would come, I could use the hydraulic lift to lower it into the cabinet and close the lid. For what it cost, I had aspirations for it to last a lifetime. It wasn’t the largest, but it’s what I could afford at the time.

As I began to take over the guest room and realize that it was truly my studio — because really, why keep a guest room when you only have a guest once or twice a year? — I added a few pieces. When my girls had outgrown the changing table, I hauled it in and used it for open shelving. I took an old bookcase and loaded it with books and binders of notes. I even bought a cool craft table from Hancock’s with 2 leaves that fold up.

That craft table. I’ve loved it to death — literally. It’s on its last legs. It’s great because I can fold up the two sides and roll it into a corner when I want to convert the studio to a guest room — on the few occasions a year that company comes. 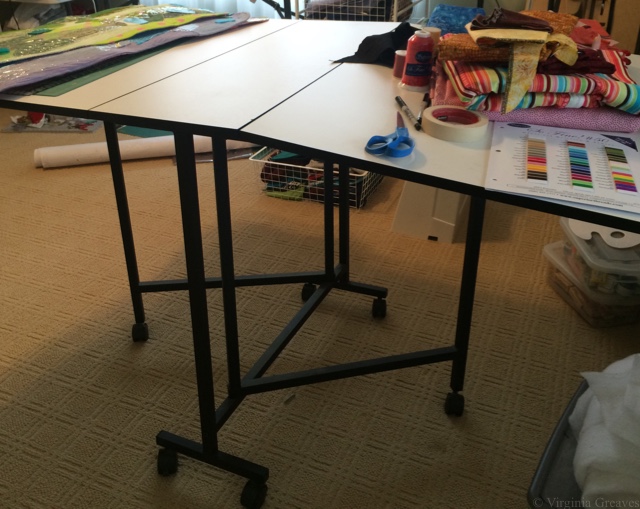 The final size is just shy of 36″ x 60″ when fully extended. But wait, isn’t that a screw down there underneath? Yes, several screws can no longer be seated. The table is no longer flat — you can see the top on the right-hand side bends a little lower than the rest — and there’s quite a lean to the entire thing. I think it may fall over soon.

It’s a perfect size because I can place a 36″ wide cutting mat on one end, and it even has an ironing cover I can put on it when I want to iron something bigger than my ironing board.

Looking around the internet, it looks like the best solution for a replacement craft table is going to be 36″ short bookcases with cabinet grade wood over the top. Very permanent and not nearly as versatile as the piece above — but probably more sturdy over time. I’m considering using commercial grade velcro to hold the top in place rather than L brackets so I can move it all aside if I want went company comes. I haven’t decided if I’m going to keep the bookcases at the height they come in or add legs — it depends on what I find on my discovery trip to Ikea.

And the Koala Cub — it’s in bad shape. It did not move well — and that was 7 years ago now. There are several pieces that have just fallen off, and when I upgraded from the Viking Designer I to the Janome 7700 with the 11″ harp, the only way to fit it on the hydraulic lift was to cut out more of the opening. I’ll have to plan to replace the Koala in the long term given how expensive sewing cabinets are. I think mine was $700 and didn’t last 10 years — and other than the move, I hardly ever moved it or closed it up. Disappointing.

The ironing board is another matter. It is covered with a large piece of wood covered with cotton batting and muslin. I use it on the back side of the Koala, and the stand is sagging under the weight of the wood. It’s cabinet grade wood and very heavy, so the good news is that it has stayed flat, but the bad news is that it’s heavy. I may have to replace the stand soon — although ideally, one day I can buy a cabinet with a back piece and put the ironing board somewhere else.

I also added 2 large foldup tables when I moved here. One of them holds my serger and any other machine I might have on hand — and the other one is used in conjunction with the craft table. They can both be raised to counter height which is helpful, but they’re not especially deep.

I don’t think much about the furniture in my studio other than as a passing irritation. The impending collapse of my craft table, however, will force my hand on at least that issue.

I will admit that I’ve been drooling over Kathy Nida‘s very large light table for some time. She inherited it from a glass cutter, and it saves a whole step in the process of construction. If I had a bigger space — or a different room I could use as a guest room — I’d be tempted to try to construct something like that.

We can all build dream studios on Pinterest, but when you’re making do with what you have, sometimes you have to be creative — even with the furniture.

This entry was posted by Virginia Greaves on March 3, 2015 at 3:33 pm, and is filed under Studio. Follow any responses to this post through RSS 2.0.You can leave a response or trackback from your own site.