« Home Stretch
The Best of Intentions »

The Good with the Bad

the end of the day, we all have to measure the good with the bad. Life is just like that — sometimes we win, and sometimes we lose.

Exhibition opportunities are definitely like that. I entered the National Portrait Gallery Competition this year. I had entered a couple of years ago, and I didn’t really hold a lot of hope that this would be my year, but you never know if you don’t try. It was a stretch for me. I was even planning on putting that piece in another show whose entry deadline was a couple of days after the scheduled notification date from the NPG.

Well, what was I thinking? Silly me. I put notifications and other dates on a calendar so I can keep track of them, so I know quickly when something is late. The NPG notification did not come when expected — after a day of hand wringing. So the next day, I poked around their website and found that they had changed the notifiation date. They had added two weeks. Senseless. After waiting 2 weeks and missing another opportunity, they sent me a reject. That one hurt — not because it wasn’t expected, but because I committed it to their show using their schedule of dates as a time guideline for its consideration. For them to take more of that time and not take the piece is just unprofessional. The fact that it’s the NPG means that they feel entitled to do that, but maybe I’ll think again before entering that particular show next time. 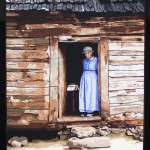 I did, however, have two pieces accepted to Sacred Threads 2015 — both Golden Moment and Worn. Sacred Threads is a fabulous exhibit — it’s in DC, it’s largely attended, it’s run by two of the nicest people (Lisa Brehm and Vikki Pignatelli), and then afterwards, pieces are typically invited for touring to other exhibit opportunities. Two years ago, I had two pieces in the show, and the one that was for sale sold on its first exhibit after the main one. (The other one was NFS — and it’s currently sitting on a table in my studio, waiting for the day that it’ll be hung.)

I printed out the list of work that will be included in this exhibit, and it’s extensive. I thought I had printed out the list from a couple of years ago, but I couldn’t find it in my file. It feels as if the number of works has increased significantly. I’m in good company.

And then a local show, East Cobb Quilt Guild: Georgia Celebrates Quilts, has also accepted Worn. That show is at His Hands Church in Woodstock, GA, and will run June 11th-13th. It’s nice to be in this one since I can actually personally attend. I’m also scheduled to talk to the Guild later this month.

I’m still trying to wrap my brain around IQF-Houston. The only thing I have left that would be available to enter would be Irish Eyes. All of my remaining work is all ready promised to another exhibit or is considered too old. And maybe there is a little part of me that still stings from last year. So I haven’t decided whether to enter or not.

And then I would love to make a piece for the SAQA Benefit Auction. It’s due June 1. Can I get everything done in time?

This entry was posted by Virginia Greaves on April 29, 2015 at 7:45 pm, and is filed under Exhibition. Follow any responses to this post through RSS 2.0.You can leave a response or trackback from your own site.