« Cloning
Model of an Atom »

I was getting ready yesterday to write about my trip to the beach and about some books I had read recently — but I got distracted by upgrading WordPress. Sometimes those mundane tasks are comfortable and keep us from moving forward.

And then yesterday, I watched that old movie Reality Bites with Ethan Hawke and Winona Ryder — an early Ben Stiller movie. Much more serious than his later stuff.

I am a member of Generation X — and that is what this movie is about. At one point, Winona says that she was supposed to really be somebody by the age of 23 — and Ethan tells her that all she has to be is herself — and she says that she doesn’t know who that is.

Another theme in this movie is about selling out. Ben Stiller’s character (he cast himself in the movie) is Winona’s corporate boyfriend — and he has sold his soul. He takes her heartfelt documentary about her friends and their problems and changes it into a puff piece about how silly they are in order to impress the TV networks. When she finds out & gets upset, he promises to have them delete the pizza image — as if a silly fix like that would undo the damage that has been done.

And Troy, Ethan Hawke, Winona’s live-in friend who wants to be the boyfriend — he lives on the edge. He has been fired 12 times and his passion is singing nights in a band. That is the only thing he can commit himself to — unless Winona will change her mind and dump her boyfriend for him.

There is a great scene in which Winona accuses Troy of having sold out just like everybody else — except he doesn’t get paid for it.

And I think that that is what has me stumped.

Anyway, last week we went to the beach. I took a picture of my foot: 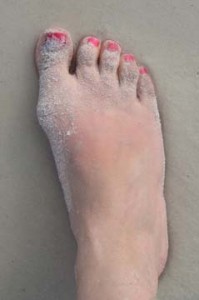 I went to all that trouble to paint my toenails, I thought that I should preserve them for posterity. I also did my girls’ toes and intended to take pictures of their toes in the sand, but good intentions don’t usually get us very far.

This is the view down the beach at SanDestin last week: 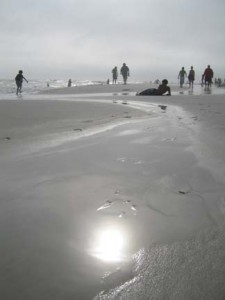 The first 2 days were beautiful and I burned. I always burn in Destin no matter how much sun block I put on. The last full day I spent under shelter.

I’ve been trying to improve my photography skills. I think that the hardest thing is just composition. I know my camera fairly well at this point — but the outside world is another thing. Maybe I’ll get a friend & go out one day next week just to take pictures. I could use the inspiration. I have felt burned out lately — the move took a lot more energy than I expected. I have almost all of the applique done on the cloned profiles I’ve been working on — and I finally got a good idea about setting it all together — but it will involve paint and stamps and foil and playing. I am thinking about setting it up in the garage. We don’t have a shop sink at this house, though. I didn’t realize how nice that was until it was gone. A wet studio is harder to set up than a dry one — although my dry studio is still a mess.

This entry was posted by Virginia Greaves on April 16, 2008 at 4:40 pm, and is filed under Inspiration. Follow any responses to this post through RSS 2.0.You can leave a response or trackback from your own site.