Model of an Atom

My oldest daughter asked me to take her to WalMart the other day so she could buy supplies for a school project — a model of an atom. She bought gold jewelry wire, a large styrofoam ball, beads, and air dry clay. I could see the creative spark in her so I let her have whatever she wanted. (Thank goodness she didn’t ask for a pony.) 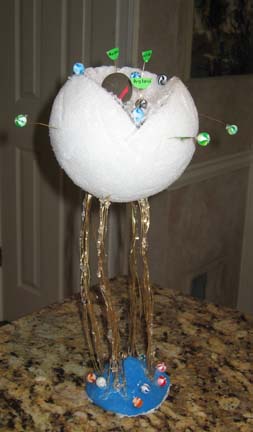 Isn’t it cool? I was so impressed that she could dream this up in her head. She used the wires to hold up the styrofoam ball, but she ended up using hot glue to attach the ball to the wires — and then had a blast making jewelry with the wire, beads, and glue. The styrofoam has a section cut out of it. She marked it with black marker and then I cut it out using a knife — carefully. It wasn’t as easy as florist’s foam, but I marked the outside & wedged it out in sections.

I can identify with that.

This entry was posted by Virginia Greaves on April 23, 2008 at 12:27 pm, and is filed under Inspiration. Follow any responses to this post through RSS 2.0.You can leave a response or trackback from your own site.