« Still Working Away Here
WordPress: From Blog to CMS Part I »

The Month of December

I always think that I’ll have at least a couple of weeks in December in the studio. Once again I seem to have forgotten that all the details of the holidays must be done in those weeks and studio time is precious little.

So I suppose my target of finishing Bukonyan Elder in December was a little off the mark. I did finish the applique and have her pinned and ready to quilt. Ever wonder what the back looks like? 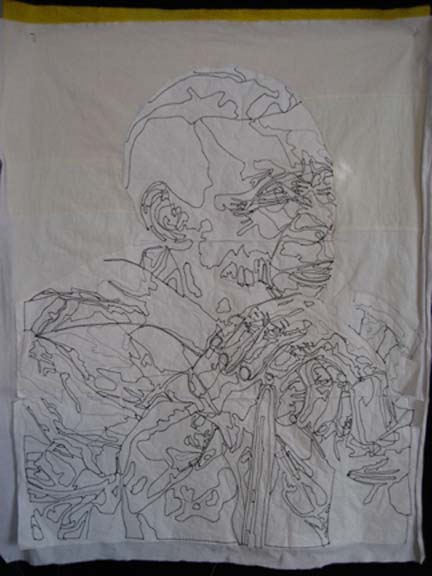 I use a tearaway stabilizer on the back. A few years ago, I found a tearaway that also dissolves — so the part I can’t tear off will dissolve in water when I soak it before blocking it. I like the idea of it all going away. I think that things that last a long time in a quilt — other than thread & fabric — can hurt its longevity. Not scientific I know — but I want my work to last a long time.

When I was done, I took a picture of it and looked at it on the computer. I initially thought that I shouldn’t add pinpoints of light to her eyes — the focus should be on her hands — but looking at it in Photoshop, I can easily add the points of white in her eyes — and it did make the piece look better. So I added them with white thread before pinning her up to ready her for quilting.

What else have I been doing? Tonight my Fiber Art Fusion group has our 5 x 7 holiday exchange. I played with a picture of the Statue of Liberty’s face — a model that they keep inside & is still copper colored — and came up with Lady Oxidation — which I kept green to show the oxidation that the outside statue of her visage has. To me, her expression is quite fierce, and it reminds me of the passion that our forefathers had when they broke away from England and declared their independence. The exact inspiration for her is unknown although some think that it was the sculptor’s mother, Charlotte Bartholdi, or his wife, Jeanne-Emilie Bartholdi.

I confess that I used several of the greens that I used in Bukonyan Elder. They were on my working table and perfectly suited for what I needed — and all of the threads were all ready matched. In a month of not enough time, it saved me some.

This entry was posted by Virginia Greaves on December 14, 2010 at 5:07 pm, and is filed under Design, Inspiration. Follow any responses to this post through RSS 2.0.You can leave a response or trackback from your own site.