It Takes Two to Tango

Sometimes, it can be difficult to get on the computer in my house. I have been continuing to work and take a lot of pictures, but I can’t always get on my blog to share them. I’ll start with some catching up.

In my current piece — I have finished my first face and started on my second face. I tend to start with the faces and build the rest of the piece around them. I’ll explain that more when I start adding pieces around the faces.

These are the first two values in my second face. 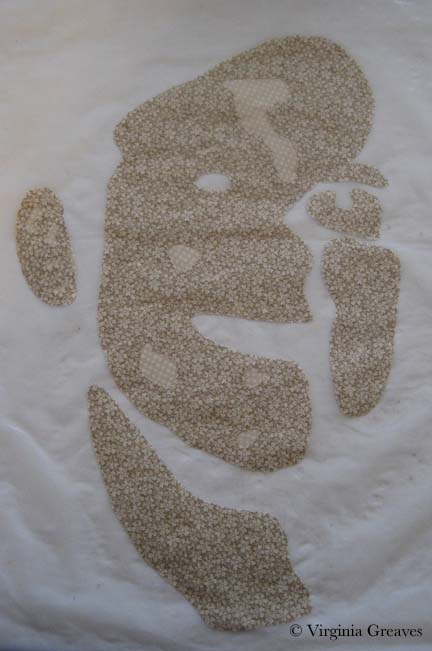 This particular person has Autumn coloring so I went back to my wonderful orange beige paisley. This is a risky fabric to use but I love the movement it gives to the face. 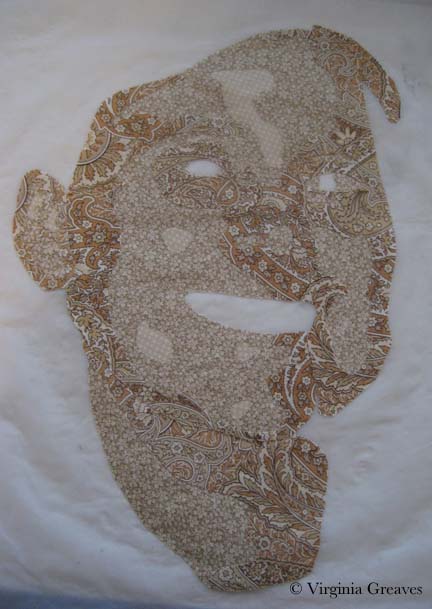 Then the darker shadows begin to show more of the outline in the face. 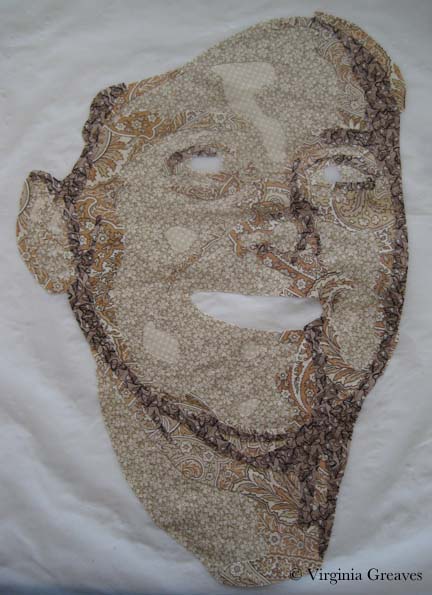 I have started adding dark around the eyes to give them more depth. 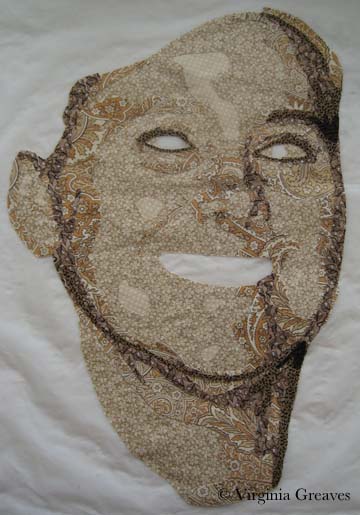 Once the eyes have been added, the outlining is a subtle difference — but an important one. 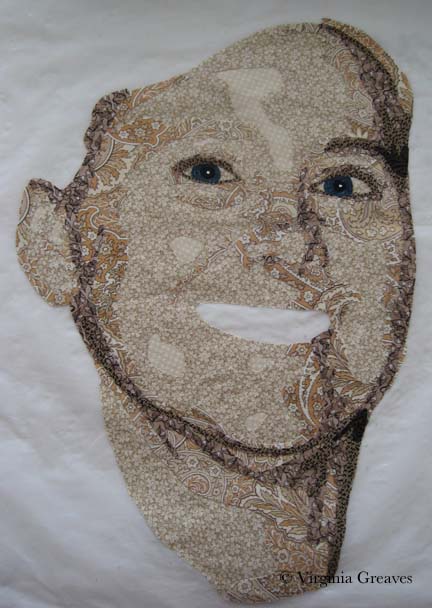 Once I’ve added the mouth, you can see more of her personality. Like the first figure, she also shows some gum in her mouth — and I’ve added the same experiment as before. 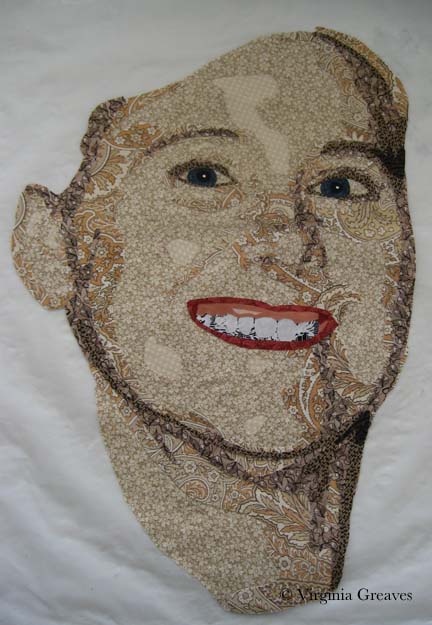 This is what she looks like on my design wall before I’ve added her hair. Her hair is much more complex than the last figure. She has long tresses down the right and left sides — and then a cap over the top. (Notice the color shift my camera made from a white background to a black one — the tones in the face look more gray now.) 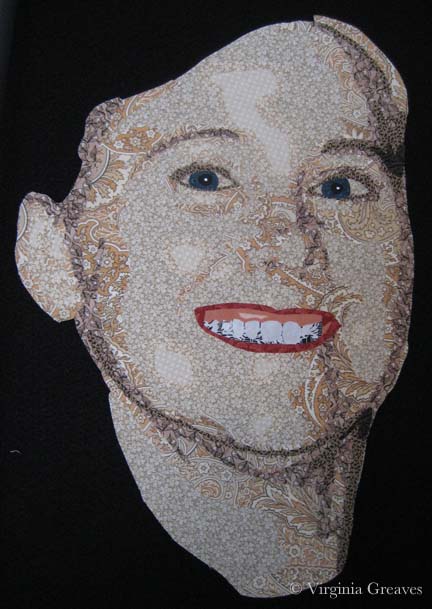 This shows the first three values of her hair on the left side of her face. She has a lot of blond in her hair, although the deeper tones go into brown.

This is the completed left side.

The right side is more flowing — and with only three values, the pieces won’t fuse together as one large piece yet. 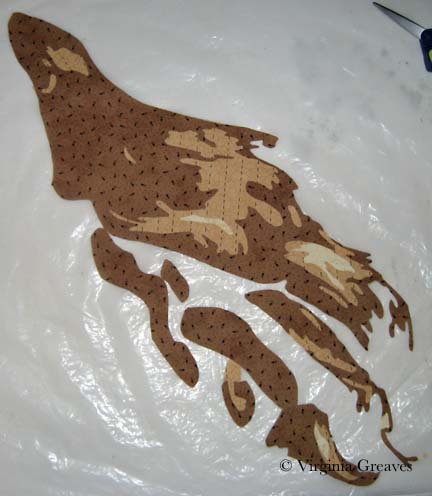 The darker values bring it all together though. 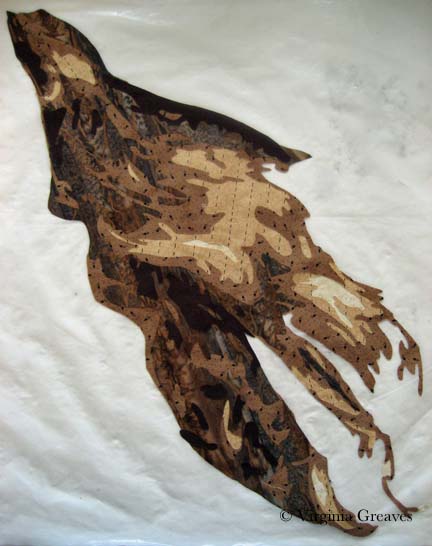 This is what they begin to look like on my design wall. The second figure still needs her hat but I’m putting off adding it because its color will affect the rest of the piece — and I want more elements added before I decide what to use. Her hair also drapes over her jacket which will be more obvious once those pieces have been added.

I wanted to point out that I’ve complicated my process. In order to create more complex pieces, I have one very large vinyl overlay — and many small ones. I use the small ones to tape onto my fusing sheet and create the smaller pieces. I can then assemble them back together under the large overlay.

Also, I have returned to a white piece of muslin for my base. Because the background of this piece will be dark, the faces need something light underneath them. A dark fabric underneath them would change the color of the fabrics on top.

I have also starting adding a watermark to my images. I don’t care for watermarks — but with the advent of Pinterest, many images of my blog have started floating free. Although many kind souls give attribution, there are still instances in which it goes unmarked. Promotion is always welcome, but for a visual artist, lack of attribution can be quite damaging. It’s also important for the servers to which my pictures are copied to have some idea of the original copyright holder. So I have turned to watermarks. Interestingly, I can find no quick way to add a watermark to all pictures already existing on a WordPress blog (the latest version) — that works. I tremble at the thought of adding them all manually.

This entry was posted by Virginia Greaves on March 6, 2012 at 5:26 pm, and is filed under Copyright, Design, WordPress. Follow any responses to this post through RSS 2.0.You can leave a response or trackback from your own site.