I spent a long time quilting this piece. I took about a week to quilt his figure — but then I needed to do something for the background. I found that incorporating two different ideas gave me something workable without being overwhelming.

Like many people quilting on a domestic machine — I found some angles to be very challenging. My first design was a parallel flowing line which wasn’t too hard — but then I added swirls in the open spaces. These had to be done all in the same direction — so the left hand side of the quilt became a bear to manage. I found that rolling up the right hand side and holding it with rubber bands at the top and bottom gave me something to hold on to. 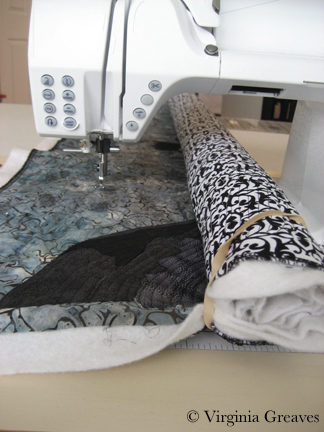 From this angle, you can see the background quilting better. I am so glad I took the time to add this texture to the piece. I think it adds to the feeling of age in it — and it’s a nice contrast to the contour lines on the face. 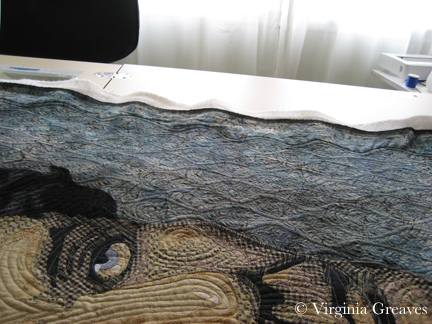 I think I’m slowing getting better at quilting. Although I’m not a huge proponent of the quilt police guidelines that the stitch length has to be perfectly consistent — and I do not have the luxury of a stitch regulator on my machine — over time, that is what is happening. I did not mark my design and chose instead to keep the framework of wavy lines organic — but even those became more uniform the more time I spent making them.

After a week of background quilting, I finally completed  Lincoln. When I sat down to write my artist’s statement, I found it entirely too political, so I decided to merely include some of Lincoln’s quotes instead.

It feels good to finish before the holidays. I already have ideas for my next piece.

This entry was posted by Virginia Greaves on December 21, 2012 at 5:59 pm, and is filed under Design, Quilting. Follow any responses to this post through RSS 2.0.You can leave a response or trackback from your own site.