Inviting Art Marketing into the Studio

Last year, I made a conscientious decision to make more marketable work. Every time someone would see Beach Guardians — I would often hear — “one day I want to commission you to do a piece of my grandchildren/children.”

I made Beach Guardians because it was from a picture I had made of my children at the beach. I owned the copyright — and it inspired me. At one point I had a price tag on it — but my husband soon told me that I couldn’t sell a piece of our children. It was going to stay in the family.

Which is fine — but making portraits of friends and family wasn’t taking me where I really wanted to go.

I knew I could make portraits of people — but I also knew that the few pieces I had sold in the past were animals. Anyone that has ever owned a bull dog will look at a bull dog piece of art and say “that looks just like my dog” — and want it. Now.

So after Lincoln, I stopped making portraits of people. I made an angel (arguably a person but a piece that was abstract enough that anyone could relate to it AND it was religious), a dog, a bird, a rabbit, an abstract piece, and then another dog. And then Lincoln won a prize at Houston — and why hadn’t I made any more people?

But the answer was easy — the first dog (Firecracker), the angel (The Bowl Judgments), and the bird (The White Raven) all sold.

Although — I did come home from Houston wondering what in the world I was going to do next. I felt like I should make another person — and I became inspired by a photograph by Dorothea Lange of a woman and her three children. It felt natural to make people again and it flowed through my fingers easily. This is where Worry came from.

But I felt anxiety creeping into my mind — was I making a marketable piece? I suppose only time will tell.

And since I’ve finished Worry, I made a small piece — The Cardinal — for a local square foot challenge. And then I was stuck again — in my head — wondering what to do.

I think I spent a week second guessing myself. In the end, I started a piece — again inspired by a photograph by Dorothea Lange (a great deal of her work is in the public domain). But in my head, I still have this desire to find what is marketable and what is not — because honestly, you spend the same amount of time on the piece — it might as well remain on the wall than be pushed to the back of my closet.

One of my FaceBook Pages that I follow is Humans of New York. A photographer goes out into the city every day and takes pictures of the people that he meets. One day a couple of weeks ago, someone told him that he knew what the art world wanted (although I’m not certain he does but we’ll take his word for it) — and it wasn’t random people on the streets of New York — better to photograph only nudes.

I don’t know many people that will let me take pictures of them with their clothes on — much less off — so I don’t see that as an option for me. I could hire a model, but there wouldn’t be much construction challenge for me in that.

I do see some appeal to taking pics of people on the street in Atlanta — like the photographer  in New York. I do, however, understand that there is a lot of hostility given to random photographers — and I think that this guy has worked hundreds of hours building a reputation so that people are delighted to be included in his project. In most situations, people do not want to be put under the microscope of a random person they don’t even know.

At one time, I made several portraits of friends, and one day, I asked an elderly gentleman at church if he would mind if I used the photograph I had taken of him to make a textile painting. He said yes — but only if he could have it when I was done. It doesn’t work that way. A picture takes seconds — my textile paintings take 100+ hours usually. I can’t work myself to the bone for so little appreciation — let alone for free.

Luke Haynes, a textile artist from NC currently living in LA, does full figures on very traditional backgrounds. He’s done a few friends but also several of himself — and Fossil Watches just contracted with him to make a piece of himself. He has effectively branded himself — which is great if you’re 26. Youthfulness is always marketable. I can’t say that I still resemble that demographic however. 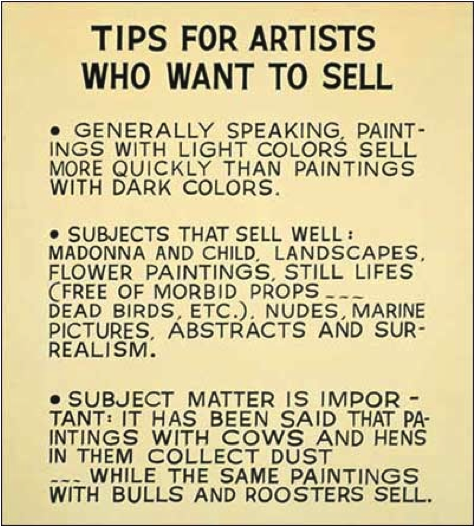 I came across this painting recently on someone’s blog — yes, it’s a painting, not a modern graphic — by John Baldessari, 1966-1968. More food for thought.

This entry was posted by Virginia Greaves on March 6, 2014 at 6:34 pm, and is filed under Inspiration, Marketing, Photography. Follow any responses to this post through RSS 2.0.You can leave a response or trackback from your own site.