Leisa and I are having a such an exciting time with this series. It is so much fun to see what the other is going to do with the work. This is the 3rd one that we’ve done and we’re already planning #4 and #5.

I was wrong — this is not the one Leisa plans to cut into strips. In fact, she cut off all the extra yellow and black that I had added at the top and bottom and returned it to its horizontal orientation. I just chuckled. I liked it better that way too but it was her prerogative.

She free motion embroidered it like crazy, added black lace, painted it, added vinyl, and painted some of the vinyl (on the inward facing side) with nail polish. It gives it the coolest effect. (I’ll have to be careful about quilting those sections lightly though. I’m a little worried if you can needle through nail polish.) 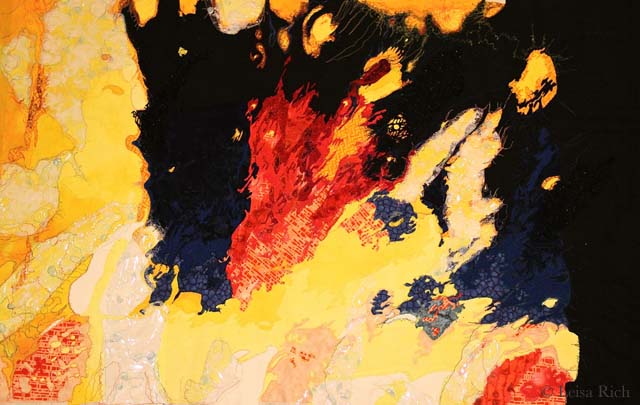 And this is a detail shot — you can see the wandering embroidery lines a little bit better here. 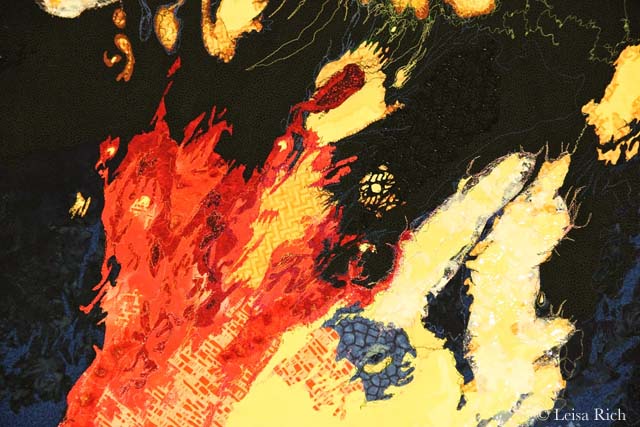 It’s interesting to see the unintended forms that come out of this process. I love where this one is going. I’m going to quilt it and then let Leisa have another crack at it — she is thinking about adding handwork after the quilting.

I have finished the binding on #2 — and I’m almost done with adding the sleeve. I do think I’ll have to add another one though. It’s not straight across at the top so figuring out how to sleeve this one has been a challenge. I added a short sleeve at the very top where it is straight — I think I’ll have to add another one lower down on the other side. I couldn’t work it into the binding edge thought because it isn’t straight.

And then I need to bind and sleeve #1, the first small one that we did. I’m having to use different techniques on these. For instance, I couldn’t pin baste #1 because of the vinyl — I had to spray baste. I’ll have to do the same with #3. #1 also has a lot of vinyl on it around the edges — so it occurs to me that can’t use my usual water soluble glue trick to help me bind the edges (which thankfully are at least straight on this one).

And because of this issue, I realized that I probably shouldn’t use my usual blocking technique on these — particularly the ones with vinyl. If I soak them in water, the vinyl may inhibit evaporation and could lead to molding — a distinct possibility as I live in the Deep South — so I’m going to forego that as well. I haven’t had a waviness problem on any of them — yet — but if it becomes an issue, I’ll block them with spritzes of water — not a full soaking.

I need to make myself stop. It’s September and I would like to have a piece to enter in the Outwin Boochever Portrait Competition sponsored by the National Portrait Gallery. I need to start photographing inspiration for that one. I entered a few years ago and wasn’t juried in so I just assumed that it was a bias against alternative mediums. Completely untrue. Be careful not to create obstacles for yourself that don’t exist. Last year, the People’s Choice award winner was a sculpture made from rice, rice noodles, and glue by Saeri Kiritani — and there was a fiber finalist — Lia Cook. I can’t be accepted if I don’t enter. You can see last year’s winners here.

This entry was posted by Virginia Greaves on September 11, 2014 at 8:00 am, and is filed under Collaboration, Design. Follow any responses to this post through RSS 2.0.You can leave a response or trackback from your own site.