Last week, I finished cutting the 4th abstract in the Car Wash series that I’m working on with Leisa Rich.

Like my other pieces, I approached it with the intent of cutting it out in color order starting with the yellows, then the purples, then the blues — but as I went on, the entire thing became unwieldy. Breaking it down into meaningful pieces became really hard. I became best friends with my colored highlighters — and I bought more of them. I rued the day that I had drafted this thing. I think I may have pulled some hair out.

I ended up with all of my fabrics on the cutting board and the master pattern on top of the piece I was constructing.

This was my first picture.

I started working on the blues at the bottom, then adding in the grays.

Then I started working on the top but was coming to the realization that the only way I could approach this monster was to finish whole sections as I came to them. 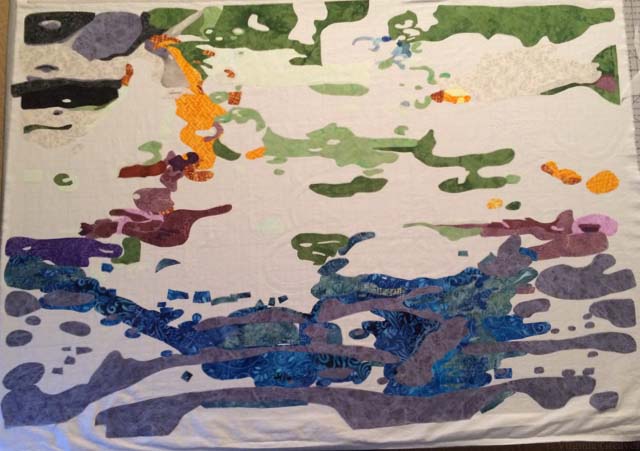 This is just insanity. I did realize that  I was almost out of that medium gray and I was going to need more. I was very pragmatic about it, though. I put all of the gray that I did have along the outer edges. Then I planned a search mission to the fabric store and luckily found something in the same color and value. It has a lot more texture, but I think that that’s fine.

Here, I can see the light at the end of the tunnel. Literally, everything is done but the part in the very middle. At this point, I highlighted that section in the middle on my pattern so I’d know where I was. I kept getting lost.

And here it is before I gave it to Leisa — a quick shot on my wall before I whisked it away. She is embroidering it. So many edges. 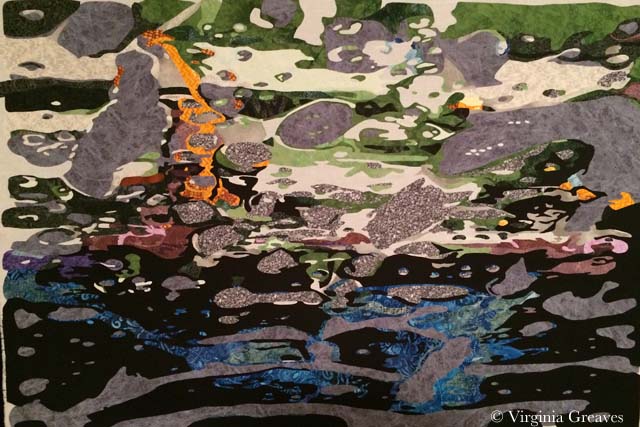 On my new time keeping app, I can easily see how much time I’ve spent doing something. I spent 39 1/2 hours cutting this out. Holy cow.

So my next piece is going to be much simpler. It has to be. I have at least 4 more large pieces to do for the show and I want to have them completed by the end of May.

Since I handed this last abstract piece off to Leisa, I’ve been working on the abstract piece that will cover the largest wall in the gallery. It will be made up of a lot of smaller pieces that will be hung individually.  Leisa is making the tops of these pieces — and she gave me a bunch to work on. I pillowcase turned them — no easy feat — topstitched them, and am now adding some quilting. They’re meant to be very textural on the wall so they aren’t heavy with quilting. I’ll share some pics later.

I also wanted to share this picture of my daughter in the Dominican Republic. She went after Christmas on a mission trip with her school and her father. 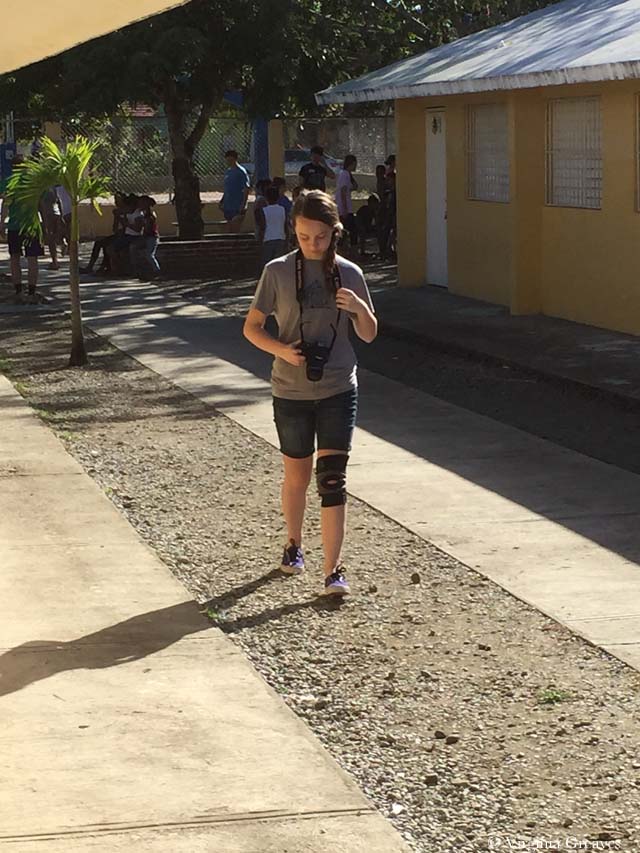 I let her take my camera — my DSLR Canon T3i. I was looking forward to seeing all of the pictures of the DR, but alas, the only pictures I will see are the ones they took with their cell phones. This is the last known sighting of my camera — it was stolen at the airport on her return trip home.

It made me very sad, but I have all ready replaced it. The camera body came last week — and I’m waiting on the lens. It should be here today or tomorrow. Instead of the 18-55mm kit lens, this time I opted for the “nifty fifty” — the prime 50mm lens. It has no image stabilization or zoom — but it’s “faster glass” with an f-stop of 1.8 compare to the f-stop of 3.5-5.6 on the kit lens. It’s a less expensive lens, but I’m told that it’s a far superior lens. Can’t wait for it to get here!

This entry was posted by Virginia Greaves on January 28, 2015 at 11:08 am, and is filed under Design, Fusing, Photography. Follow any responses to this post through RSS 2.0.You can leave a response or trackback from your own site.