You may not realize it, but I work on deadlines — by the ones laid out by exhibitions and shows and the ones I set for myself. I have a calendar that I mark with all important dates for shows I’m interested in entering. If I’m not diligent in keeping track, I would be guilty of promising a piece of work at more than one place at the same time, and because I’m a professional, I work hard to make sure that doesn’t happen.

However, at least twice in the past year, I’ve had shows that I’ve entered change their dates mid-stream. I’ve entered the show knowing that I’ll have until X date to be notified as to whether it will be included or not in the show, and after that date, if it isn’t accepted, I can enter it somewhere else.

Friday, I spent the afternoon looking at my inbox. Finally, at 5 o’clock, I went to the website for the show and found that they had changed their notification date. Today (4 days later), I received an email with an apology and announcement of the new notification date. <sigh> <shakes head> This show was a long shot for me, and quite frankly, I had another show I was going to enter it into, but now I can’t do that. I suppose if I win the lottery and get in, I won’t mind a bit, but chances are good that notification day will be a bit more bitter than if they had just given notification on time. <grumble grumble>

I have been cruising through #6 in the abstract series.  This collaboration with Leisa Rich is called Wash & Wax and will premiere at The Abernathy Arts Center in Sandy Springs this coming September.

We met a couple of weeks ago and planned on it having the appliqué in one section and embellishment after quilting from Leisa in another section that would overlap mine.

The majority of the appliqué is red. I started with a new fabric for the first value, something peachy pink, a little hard to find in my local quilt shop. (It’s hard to find a pink that will work as a first value for red without screaming PINK.)

I then used up the secondary red color from #5 as my secondary value here as well. I planned out all of the pieces on my remaining fabric, and after it was all fused down, I found two pieces that didn’t make it to the ironing board, and I didn’t have enough of the building print to accommodate them. Rather than panic, I found a solid hand-dyed fabric that I had made several years ago. It isn’t textured, but it makes a decent substitution. Once all of the other fabrics are on there, I don’t think it’ll be noticeable at all.

The third value is also from #5, and I used up almost all of it. I only have a few very small scraps left.

I changed my fourth value for this one. I didn’t think that there was enough contrast between the red pinecones and the 5th value in #5, so this time, I found a red print of wings in my stash that’s been there at least 10 years. I like the movement it adds here. 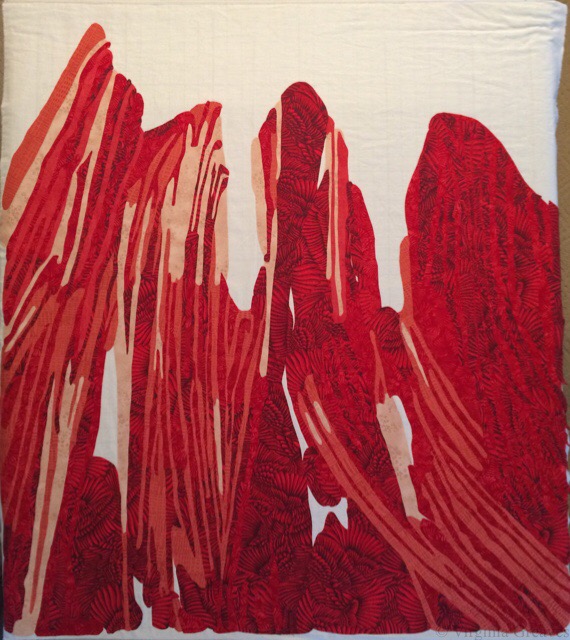 And my fifth value is the same as what I used in #5, but it shows up better with the wing fabric.

I hope it’s obvious by now that this piece is less about color interpreted through water and more about the machinery that washes the car with strips of fabric. I have done all of the red in appliqué. The majority of the blue will be embellishment attached to the top after it’s quilted. 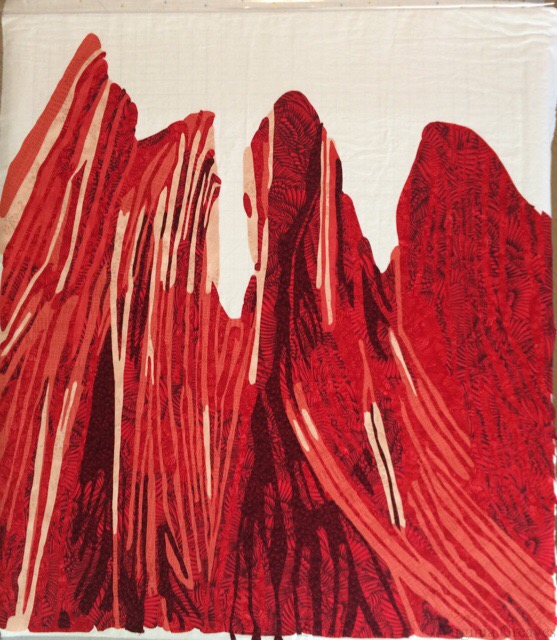 There’s a little yellow in the corner to show where the light is coming from. 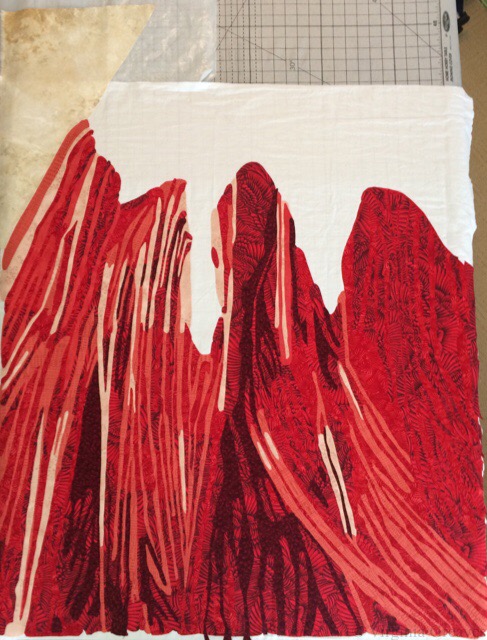 And then this is a blotch of blue where all of the blue embellishment will go. I just wanted to put a dark fabric here that would be a background for the strips put on top, a better choice than the white.

I’m meeting with Leisa again later this week. She’s done embroidering #5 so I can start quilting it, and I’ll give her #6 to start on. If you remember, #5 is very large — 60″ x 48″ — so I suspect quilting it will be a bear. I had to order more batting for it.

Right now I’m quilting some of the smaller pieces for the wall installation piece. So much to do — so little time.

This entry was posted by Virginia Greaves on March 24, 2015 at 4:12 pm, and is filed under Collaboration, Design. Follow any responses to this post through RSS 2.0.You can leave a response or trackback from your own site.