Everyone is getting ready to go to Houston next week, and it makes me sad that I won’t be there. I’ve been there the last two years — but I didn’t have anything new to enter. All of the work I’ve made in the last 18 months has gone into the Wash & Wax exhibit. It was at Abernathy in Sandy Springs, GA through October 18th. Four of the pieces will hang in a private gallery in Buckhead, GA in January. The entire exhibit will show at Hammond Gallery at Jacksonville State University in Jacksonville, AL in March, and then an abbreviated version of the show will travel to TX in the summer.

Where have I been lately? In the melee of curating Formidable Fibers and finishing up Wash & Wax, I fell and broke my right wrist, which is my dominant hand, on Labor Day. I was given a removable cast and told only to take it off to shower. When the cast came off a couple of weeks ago, the wrist was 80% healed, but I had lost 50% mobility. The good news is that I’ve become fairly ambidextrous. The bad news is that typing really hurts. Even now after some physical therapy. So baby steps.

But since everyone is going to Houston next week, I wanted to share the one piece I did make and send — a piece for the IQA Auction. (I did, by the way, complete this just before breaking my wrist.)

I spent a while contemplating what to do. I was close to completing everything for Wash & Wax, but I had started an entry for a SAQA show whose deadline is October 31. I considered making a complete face, but I didn’t really have time to do it justice. However, they asked for something in our signature style, so I felt as if I should do something along the lines of a portrait. Last year I did a cardinal. Small format work is hard for me.

I finally decided that I could do a set of eyes peeking through a slot in a door — rather like the woman peeking through Amy Pond’s reality in Doctor Who. This is the first two skin values. 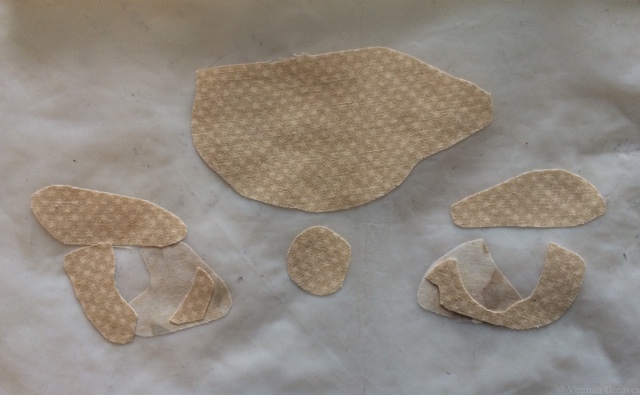 This is the third. Still hard to see without the irises of the eyes for reference. 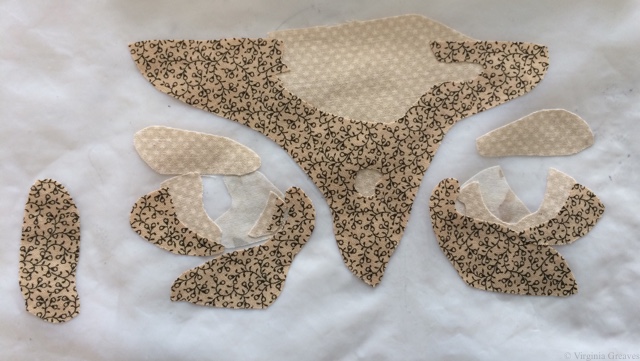 Four and five give enough definition, but he still looks rather like a zombie.

The last value gives you the exaggerated curve of the questioning eyebrows.

And finally, the eyes. For inspiration, I used a picture I took of my husband soon after we were married. I even managed to match his eye color fairly well.

And here he is peeking through the door. 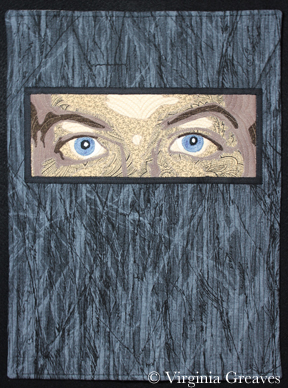 I changed how I did this face — subtly, but I like how it turned out. I usually don’t start any part of the eyes until the end. In this instance, I filled in the whites of the eyeballs in the beginning when I laid down the other lightest values in the face. It makes then recede a little bit more.

So if you get a chance, stop by the Auction Booth at IQA while you’re in Houston next week and make a bid on one of the fabulous pieces they’ll have. And if someone would snap a quick pic of mine on the wall with the other work and then email it to me, I’d be very grateful.

This entry was posted by Virginia Greaves on October 21, 2015 at 11:47 am, and is filed under Design, Fusing. Follow any responses to this post through RSS 2.0.You can leave a response or trackback from your own site.