« How to Quilt a Face
Re-Connecting »

My Fiber Art Fusion group has a holiday exchange in December of a 5″ x 7″ piece of art — which sounds really easy — probably won’t take a lot of time. But actually, I find it much harder to work small. When you’re used to working in a particular scale, going far from that can really throw you.

Which is to say that my first piece totally bombed. I tried to do a 4 value beach scene in black & white — three people in the surf with their backs to the viewer. I think that it is a good idea for a piece — but it really needs to be larger. Lower the # of values was not enough to make this simple. First there were too many really small pieces needed to evoke the surf — and second, all of the fabric prints had to be really small scale for it to work. I thought I had a handle on that — but I wasn’t thinking small enough. At some point I realized that I was at a point of diminishing returns and I stopped.

At this point, I thought about just doing an eye — it is a shape I’m familiar with and enjoy doing and its creation would help me grow in my work by concentrating on one small yet very important part of portraits. 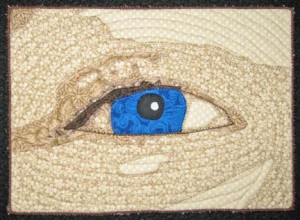 It’s made me think that I should spend some more time studying just the eye. It is done differently than in my portraits and although simplified, I like the broader use of color. I may spend the time from now until the holidays working on small eye studies.

This entry was posted by Virginia Greaves on November 13, 2009 at 1:16 pm, and is filed under Design, Inspiration. Follow any responses to this post through RSS 2.0.You can leave a response or trackback from your own site.