I confess — I haven’t written in quite a while — for many reasons. I stopped most all studio work after Thanksgiving in order to prepare for Christmas. It felt good to have all of my things done & properly prepared — but I also really missed the studio. I thought about my sketch book — even carried it around — but didn’t really work in it. I’ve also been letting Facebook take more of my life than I should. I think in the new year I’m going to limit my access.

I did make a small piece for my husband as a gift — it’s made from a picture of his dog Solomon. I made one of Solomon last year and gave it away in my fiber art group’s annual 5×7 exchange — and I didn’t realize how much that bothered him until it was all ready done. So this year I tried to make it up to him by making this small piece (Solomon II): 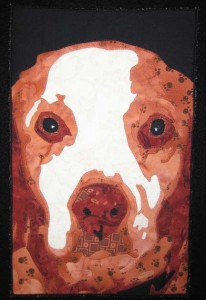 Not easy finding commercial fabrics in rust but I think I did an OK job. I even used a print with paw prints on it — which I think works out OK given Solomon’s age. He is a Brittany Spaniel & his life expectancy was 10 — he is 19 and still going strong.

I also had the complication of a new computer — on a new platform. We had an XP PC that was over 7 years old & it was making noises like the hard drive could crash any minute. We looked at new computers — and in the end bought an iMac which is SO much faster. There are new things to learn though — and the files aren’t as compatible as I would like. Microsoft Office files ARE compatible with the Mac — but hey, not all Microsoft WORKS files are compatible. Add in the fact that the CD writer on the old PC doesn’t always work. I finally brought over all of my old pictures using an external hard drive. I also set up a wireless network. I had tried for a VERY long time to do that with a DLink router — and it never worked — but the Airport  Time Capsule  set up like a dream & works with Macs & PCs.

My last technical struggle involves software. I use Photoshop A LOT — and CorelDraw to resize my patterns — and DreamWeaver for my website. I did upgrade Photoshop on the Mac — haven’t decided yet about DreamWeaver. I’m thinking about putting my entire website in WordPress. It’s been years since I’ve changed the look of it — may be time for a change — and WP is great software.

Once I got Photoshop on my Mac — and my pictures — I could start figuring out a new piece. Hmmm — not much to work with. I really need to dedicate myself to taking more pictures and maybe taking a photography class.

I have had an idea pinging around in my brain for a while. It involves doing a portrait — and then cutting it up to make it look like a cracked plate. Can I do that? Can I cut up a portrait? After thinking about who would be cracked — I decided that the answer could only be me. Although we always talk about how crazy other people are, everything is relative to ourselves — and you can’t deny that it’s possible that everyone else is sane & I’m the one that’s cracked.

I think that I just need to move away from my comfort zone of a straight forward portrait. Test some boundaries. Something maybe realistic with the unexpected thrown in.

This entry was posted by Virginia Greaves on January 15, 2010 at 1:32 pm, and is filed under Admin, Inspiration. Follow any responses to this post through RSS 2.0.You can leave a response or trackback from your own site.