Now that we’ve covered drafting, it’s time to move on to my favorite part — cutting the fabric.

Using the back side of the pattern — the reverse — trace shapes with a Sharpie onto Wonder Under and fuse to the back of fabric. Then cut out shapes, peel off the paper, and fuse to the muslin using the vinyl overlay as a guide to where to place the shapes.

This shows the first three values in the face of my newest piece. I know — not much to look at yet. 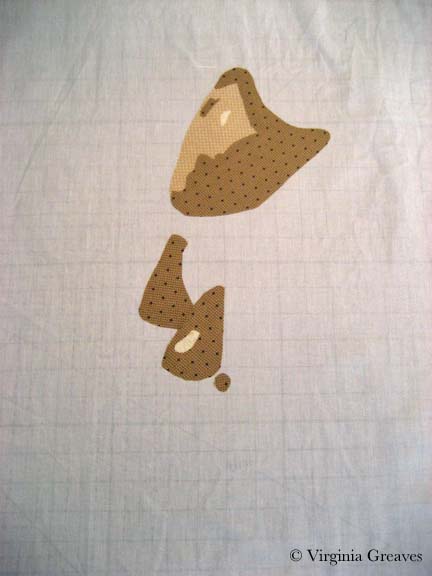 But just adding the next layer gives us an idea of the outline of her face. 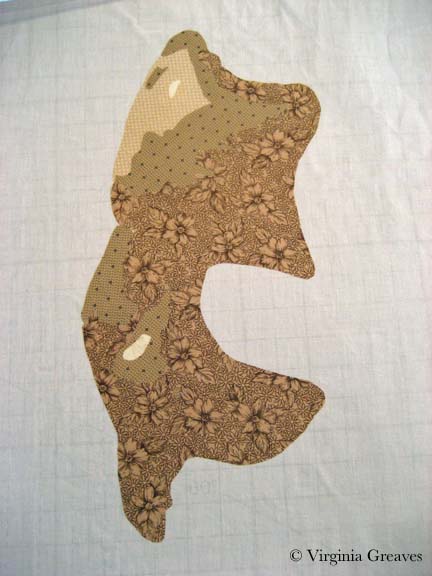 Then the fifth value shows us the rest of the face. Obviously the light sources comes from the left side — so the right hand side of her face is in shadow. 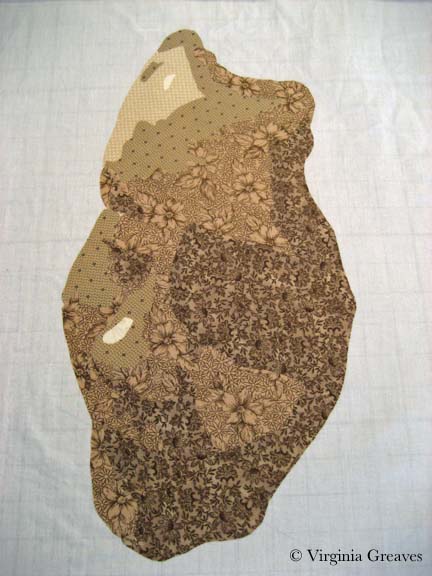 The sixth value shows us more of her personality. 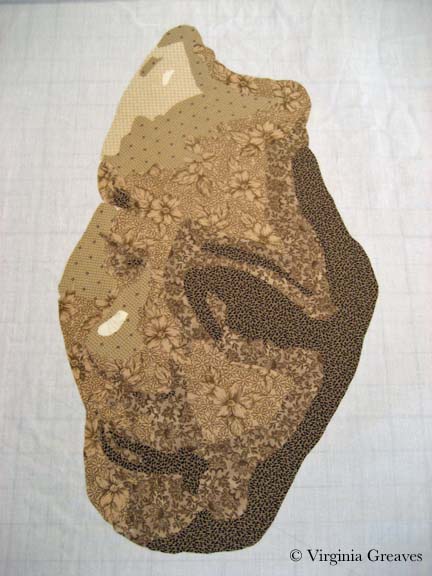 Wow! And those eyes. I have added a seventh value — not much — just a little — but it adds a little more pop. I have exaggerated the outline of her eyes — it makes then read well at a distance.

At this point, I’m leaving her mouth alone. I experimented with adding some color but it detracted from the focal point of her eyes. I may just need something closer in color to her skin tone. I’ve set that aside for now. 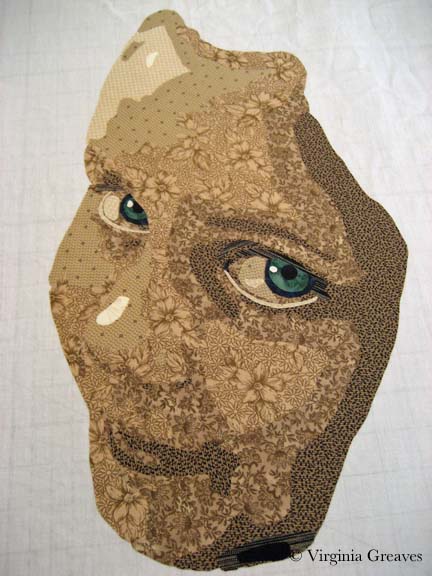 And then I started on her hair. She’s a brunette, but I’ve learned from experience to start much lighter for highlights. Using the yellow bin and the brown bin, I can get a great range of values.

This shows the first two values in her hair. 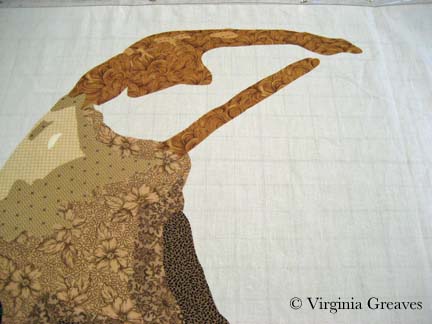 And this shows her third value. It does worry me a little at this point — whether the end result be brunette — because this looks really blonde. 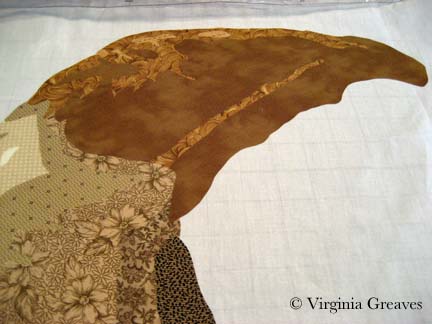 I start adding in the fourth value — which goes into brown — to the left of her part. 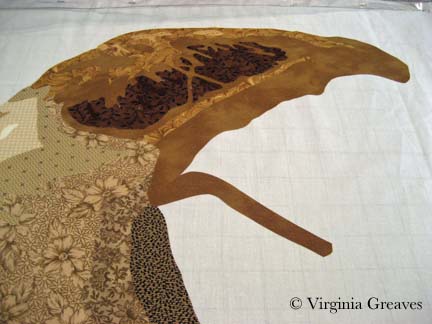 But then of course I realize I need to start working to the right of her part. 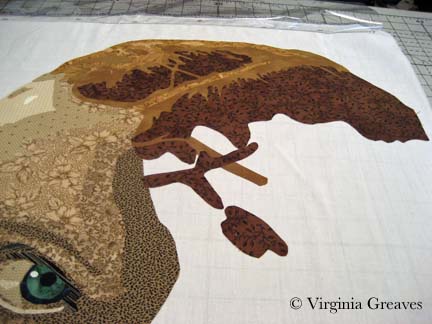 And of course I’ve forgotten her blonde values in the lower section of her hair below her chin. 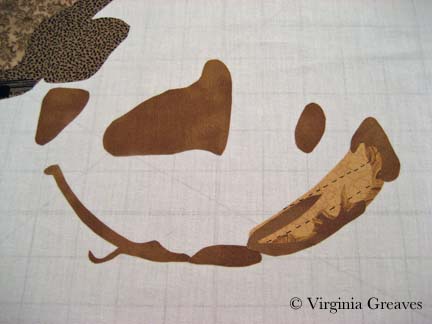 I then go back and start filling in with the fourth value. 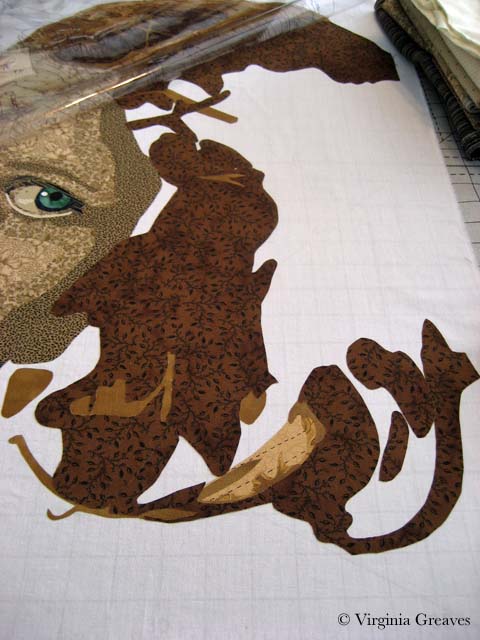 This is the Wonder-Under’ed fabric for value 5. It’s really intricate. I wonder if I’m a glutton for punishment. I have to remember — I have to cut this out — and I’ll eventually have to sew it. 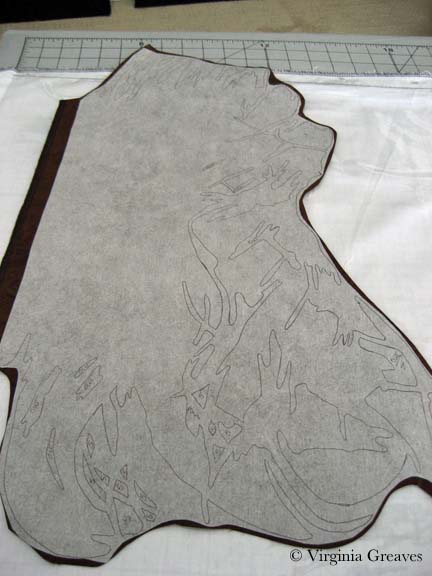 But doesn’t it look good on. 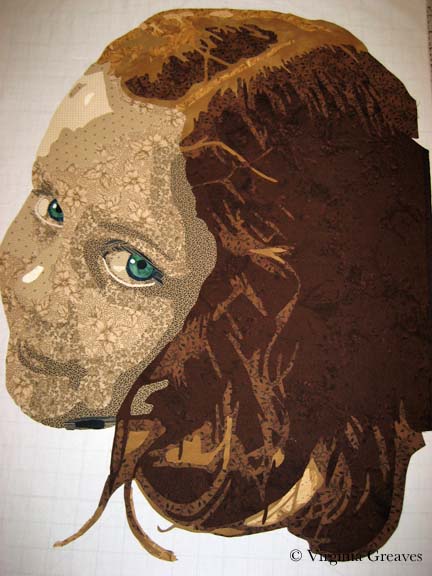 My final value is black — which is a great way to end a value range and pull one last value out of the stack.

I think she definitely reads as a brunette — and the blonde highlights give her a range that makes her face pop. And those eyes! I think they turned out well — if I do say so myself.

This entry was posted by Virginia Greaves on September 24, 2012 at 12:43 pm, and is filed under Design. Follow any responses to this post through RSS 2.0.You can leave a response or trackback from your own site.