I am guilty of ignoring my blog. I took many pictures as I made his shirt, tie, coat, and finally his hair — but the progressions are not that interesting. The white doesn’t photograph well and the black — well I was overcome with black. Lincoln has a dour personage and although I didn’t intend this to be a dark piece, by nature of his hair and his clothing, there are a LOT of black prints in this piece.

This is how he looks on my black design wall. Not bad — but I thought he would look really good on a deep navy — something that would be lighter than his hair but still strong enough to evoke images of the Union flag. I even considered adding flag details in the background but decided that it would only distract from his piercing stare.

Clearly, I was wrong. It is hard to tell in the artificial lighting of most fabric stores how a value is really going to work. This one is much too dark. Sadly, I had been to a couple of local quilt stores, and this is the only one I felt had promise. 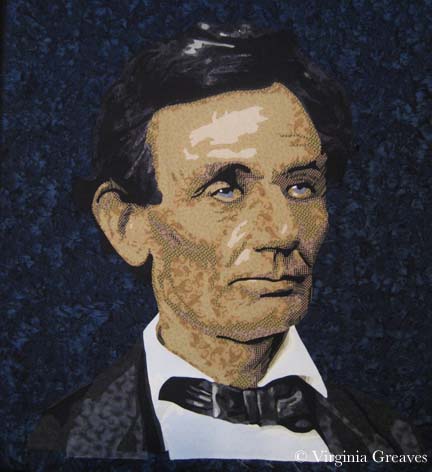 I found this sky fabric in my stash. It has a cool feel about it, almost as if Lincoln is standing on the battleground — but the white in the clouds is too distracting — another reason I finally declared that he needed a plainer background. 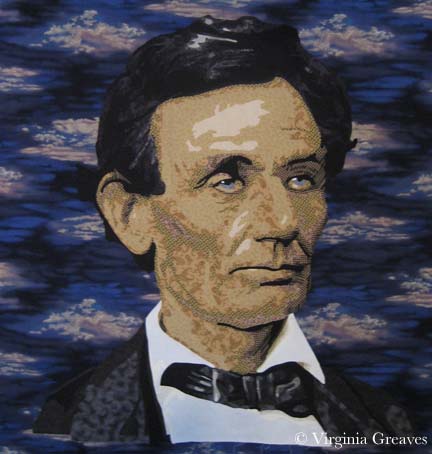 And then I found this green batik. It has a feeling of age to it. It has some texture in the print, but not much. It is exactly the right value. I wouldn’t have thought this would work — but there is some smoky blue in it that pulls out the color in his eyes — a faded gray that hopefully reflects weariness. 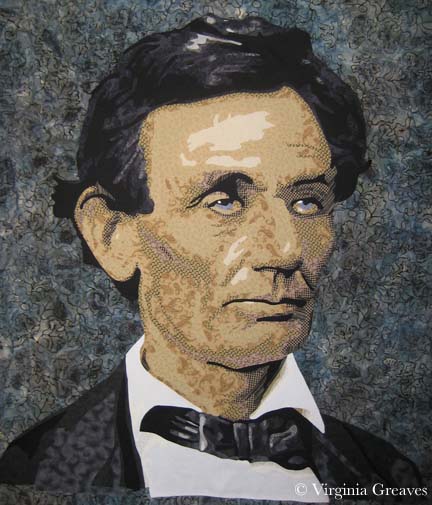 Today I’m pondering how to quilt him. I’ve been drawing on my picture of him. The lines of his face are so distinctive and different from what I’ve done before that I had to pull some new tricks out of my bag. The line under the left cheek for example had to be highlighted. The chin also sits in an awkward fashion and makes the joining of the cheek to the chin different from how I’ve approached it before. 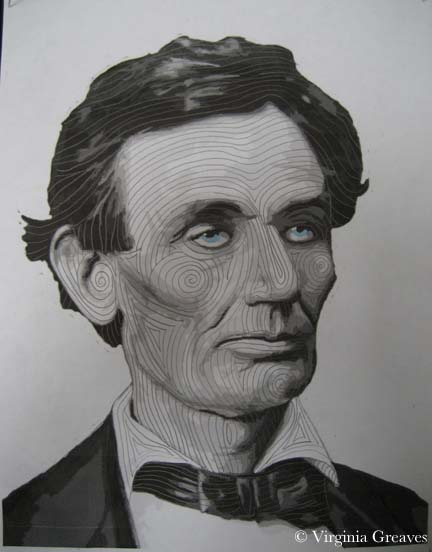 This entry was posted by Virginia Greaves on December 4, 2012 at 1:35 pm, and is filed under Drawing, Inspiration, Quilting. Follow any responses to this post through RSS 2.0.You can leave a response or trackback from your own site.