I have been working away here on my Golden Retriever. This is what she looked like before appliqué and quilting. I have since completed appliquing her and just finished pinning her this morning in preparation for quilting. 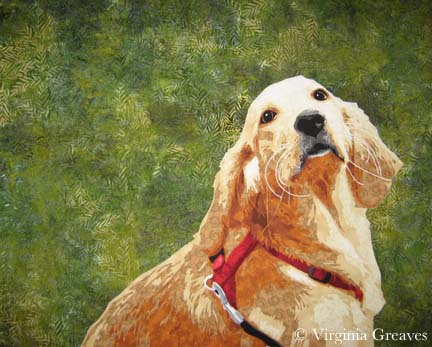 I bought several backgrounds before I settled on this batik. I didn’t want anything busy to distract from the Golden — so piecing a background was out. I also had decided to stick with analogous colors on the color wheel — so I knew yellow green was the correct color choice. The first piece I bought was a lime green that I thought would be perfect, but the minute I brought it into my studio, I knew it was wrong. I also bought a yellow green with some gray in it — which worked, but it didn’t make the Golden sing. It was just too flat. There was a batik at the store I had decided wouldn’t work because it had too much yellow in it — but at home, looking at my other choices, I knew it would work — and it does. Sometimes you have to move out of your own way.

I have also had some exciting news — I’ve been given the honor of being invited into the Winner’s Circle at the International Quilt Festival in Houston this year for my piece Lincoln. I’ve never even been to the show before — but I’ve made my reservations and I’m looking forward to meeting other artists I’ve only met on the internet and feeling honored to be in their presence. When I find out my prize at the end of October, I’ll be sure to share.

This entry was posted by Virginia Greaves on September 26, 2013 at 1:21 pm, and is filed under Design, Exhibition. Follow any responses to this post through RSS 2.0.You can leave a response or trackback from your own site.