Mothers and Their Children

I haven’t worked on a person since I made Lincoln a year ago — but given that it was so successful at IQF, I thought maybe I should revisit making people again.

So I found this incredible picture taken by a government official in the 1930’s of a woman surrounded by her children and the lines of worry embedded in her face — and I decided to use this as my inspiration. (Don’t worry — this is a public domain picture.)

At first I chose this because of the parallels between the economy today and that of the Great Depression, but as I worked on it, I began to see it more as a metaphor for motherhood — how mothers worry and how their children are naturally oblivious to her stress.

This is the first value. Not much to see — although I’ve found this to be one of the most important layers. If I’m going to be criticized, it’s usually on the brightness of this first layer.

In the second value, you can see the worry lines in her forehead and the outline of her arm and fingers.

The third value gives you a fuller outline of her face and arm.

The fourth value gives you the deepening of shadows.

She begins to come alive in the fifth value.

And the deepest shadows are in the sixth value. I did not add color to her irises — I intentionally kept them black. I also added a dot of white to her eyes.

Then I went to her hair. I purposefully decided to keep it dark. 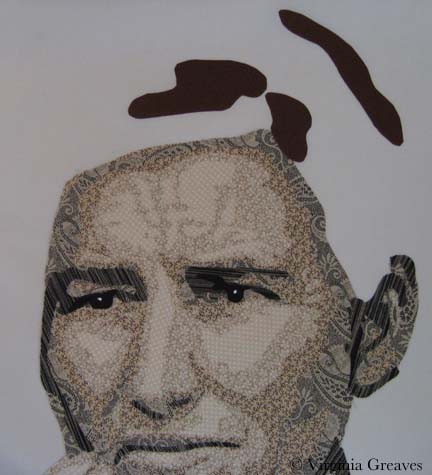 The second value is a dark brown. 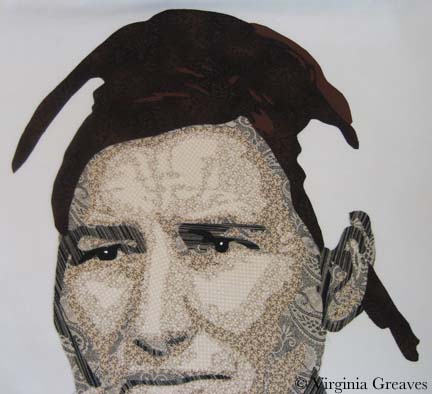 And the third value is black. 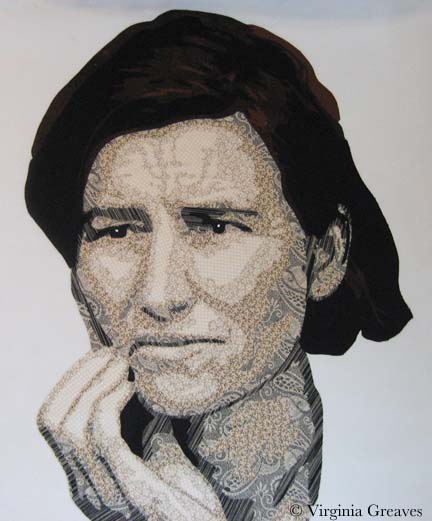 At this point, I need to start her blouse and jacket. I’m considering making her very conspicuous with hot colors in her clothes — and then using coolers colors in the children — to convey the difference in mood between them — but I’m also considering making the children into more literal shadows using tulle and thread and not completely appliquéing them with fabric like I did the mother. It’s something for me to consider for a while.

This entry was posted by Virginia Greaves on November 22, 2013 at 5:46 pm, and is filed under Design, Fusing. Follow any responses to this post through RSS 2.0.You can leave a response or trackback from your own site.