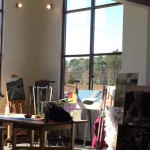 About once a year, I go to my daughters’ school and talk to the art classes — this year, both the middle school and high school. I have spent many years mentoring this age range and I always enjoy the time I spend with them. Sunday school classes are different from art, but the light bulb moments are just the same.

When I arrived last Wednesday, the MS art teacher Mrs. Purdy introduced me to the school’s new art studio. It has been built on the top of the school — and the high ceilings and natural light are the perfect backdrop for creativity. She showed me a project that the 8th graders had been doing — sculpture made from hanger wire, stretched pantyhose, and paint. The results were stunning.

I had the 6th graders first. They had the biggest ears, and when I asked them who was afraid to fail, most all of them eventually raised their hands after I raised mine and encouraged them. They asked many questions and wanted to see all of my quilts. The boys were more interested than the girls — a strange fact I found in all three of the MS grades — and they were interested in dollars and cents — which I shared to help give them perspective. I also gave them a quick idea of how a small piece — The Cardinal — was made — showing them the value painting, the pattern, the vinyl overlay, and the quilting outline.

The 7th graders were second. They were interested — but noticeable less so than the 6th graders. They asked less questions and only half of them raised their hands when I asked them about fear of failure.

The 8th graders were third. They were almost absent — but at this age, I understand that social fear is very high. The girls hovered nearby with pomegranate juice and food. I don’t think they noticed that I grabbed my pieces to place nearer to the boys who didn’t have staining materials. (I did find an ink pen placed between the pieces later in the day. At least the pen was closed.) When I asked about fear of failure, I don’t know that anyone raised their hand. The question brought blank stares. At the very end, I received an outcry from one of the girls who finally comprehended that I had made a piece a couple of years ago with her mother as one of the subjects. Their attention was the most difficult to gain but they were mostly quiet and listened.

At that point, I came home for lunch. I did notice a jump in interest in my blog — I think a few of them spent some time after I left perusing the website. It’s hard to know who listens and who doesn’t but maybe I was able to help someone.

I had high hopes for the high schoolers. I only knew that a few of them were interested in design — specifically clothing — which is not really my forte, but the HS art teacher had bought a sewing machine and needed someone that could talk to them about the basics. I took a few quilts with me — but I planned to spend only an hour. Not knowing what gaps in knowledge I could help with — I planned for this to be a question time so that I could perhaps return later with some more specific demos tailored to their interests.

Sadly, we met after school. Only one girl came. I have a high schooler — I know how busy they typically are in the afternoon — and how hard it is to grab their attention. They really didn’t know me from Adam. Thankfully — I brought almost the same materials I had prepared for the MS — and it was on the same day. <shaking head> What can I say?

The girl that did come is very talented — Sarah Finch. She is a painter and photographer — she even has a social media presence for her work and a full website built on WIX.com. She showed me this amazing dress that she made from rice bags. It has a wonderful teardrop shape in the back. There is no muslin structure, but it’s sewn securely on a sewing machine — and all of the curls on the skirt are hot glued on. 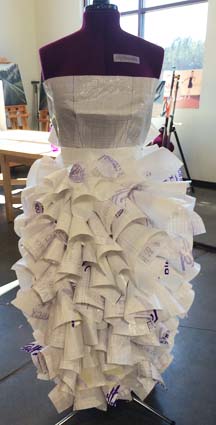 She is a senior — really didn’t need my help — but it was great fun to meet her and see where her Muse was taking her in life.

This entry was posted by Virginia Greaves on April 3, 2014 at 7:32 pm, and is filed under Inspiration, Teaching. Follow any responses to this post through RSS 2.0.You can leave a response or trackback from your own site.