This year, I was again asked to create a piece for IQA’s Celebrity Mini Quilt Silent Auction. It’s an honor to be invited, and I try to support IQA as much as I can. They have helped sell my work, and they have bought my work for their private collection. That’s a lot. So once a year, I stop what I’m doing and create something for them for their auction.

This year, I wanted to make a piece that was more like the rest of my work The last two years, the pieces have been tiny. So I wanted something that was a little bigger but still small that would give more of a sense of my personal style. I finally decided that the broadest appeal to the general public would be a dog or cat, and given that I don’t have a cat and people don’t typically take their cats out in public in the same way that dog owners do, I chose a pic from my catalogue of dog pics.

I found this pic of a black dog that I’m sure I took during a lacrosse game. I have no idea who he belonged to, but he was cute so I took his picture. I think he’s a schnauzer. I zoomed in on his face and loved his quirky expression.

In keeping with my new penchant to use unexpected fabrics (but then also working only from my current stash), I decided that the best way to do a black dog would be to use blue fabrics. Gray doesn’t have the same character as the blue grays. So, like with Minerva, I wanted to create a black dog using blue fabrics — but the end result should look like a black dog, not a blue one.

This shows the 1st two values on my pressing sheet. 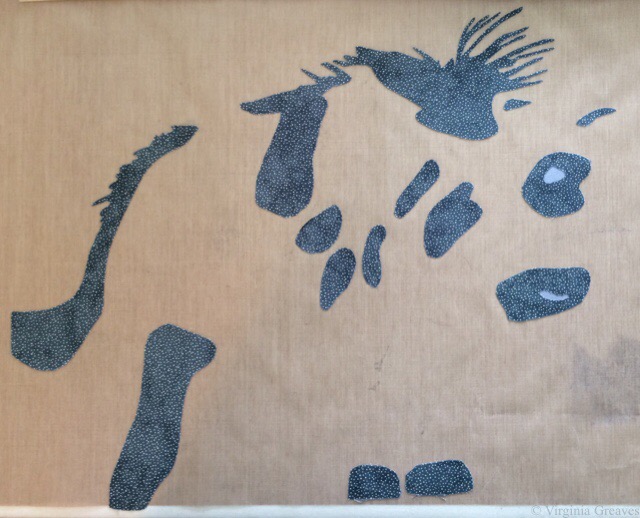 This is my 3rd value. You’ll see in a minute, there was a hole for the space at the bottom of the ear that I forgot to cut out of this layer. 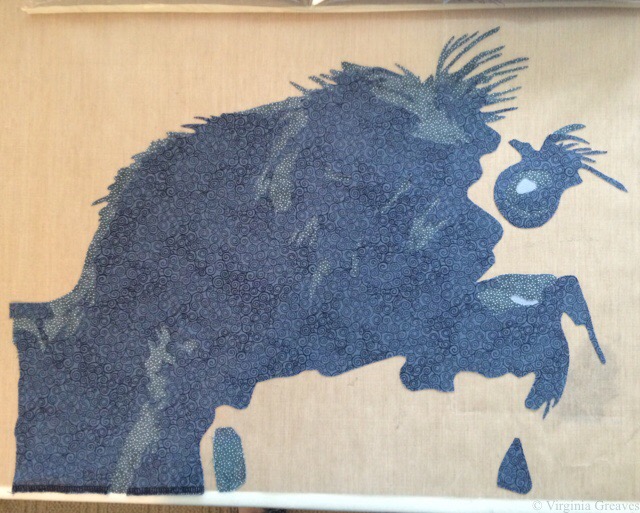 When I realized it, I traced the shape onto freezer paper and ironed it to the front.

You can see the freezer paper template in this one — which also shows the 4th value. There’s a lot more character in him now. 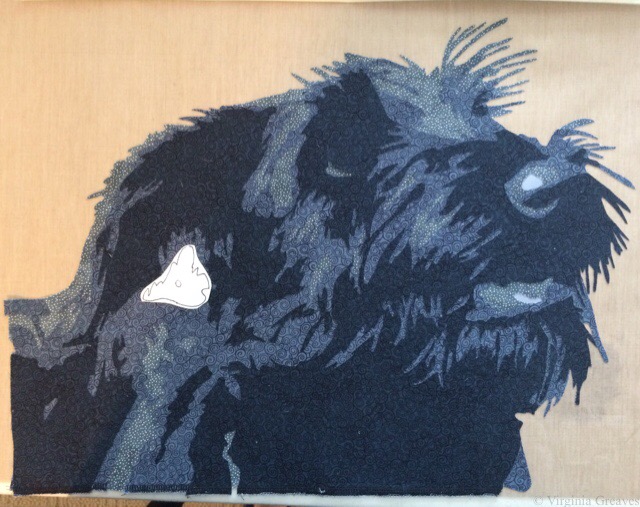 And then the 5th value was the actual pure black. He has a lot more dimension now — but he needs a proper mouth and eye. 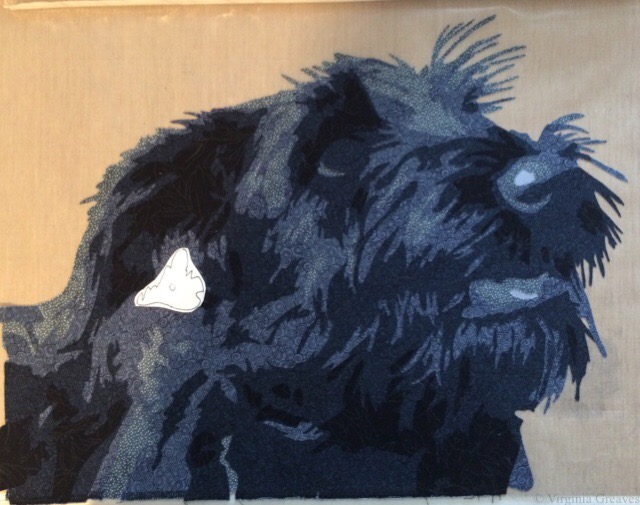 There’s a little bit of tongue tucked in there and then a row of teeth and two fangs on either side of his gum line.

And then his eyeball. As I have often done lately, I constructed it as it was in the drawing made from the values in the pic — but then ripped it off and redrew it as it needed to be in order to look as it needed to look. There are some things you can finesse if they’re not quite right — the eye isn’t one of them.

And then I ripped the appliqué off the pressing sheet and cut out the freezer template to give me the space I needed on the underside of the ear. You can see the ear more clearly now, especially ironed on to the background fabric. This yellow was a nice contrast.

At this point, it isn’t appliquéd. I decided to appliqué stitch and quilt at the same time, so I sandwiched this rough top up and straight free-motion stitched around all of the shapes. 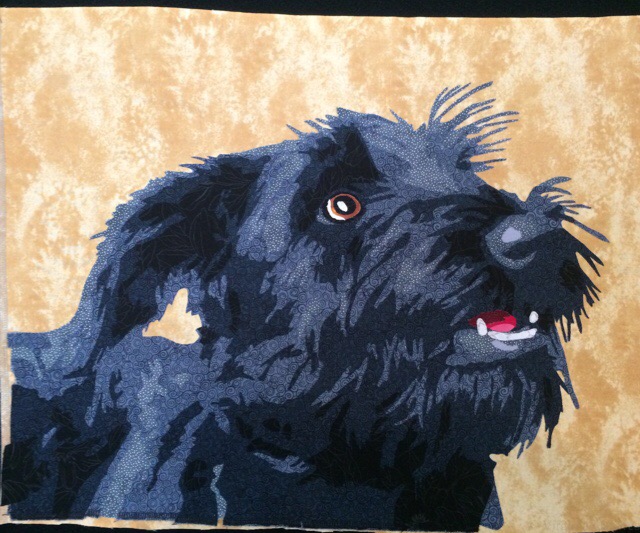 After the appliqué was done, it still needed more quilting to be evenly quilted — and of course the background had to be quilted.

The only thing I might do differently in the future, in terms of construction of a small piece, would be to pillowcase it so I wouldn’t have to add a facing to finish the edges. That took a while. But I opted against doing it because I thought this piece was a little big for that and I didn’t want any issues with it not laying flat or creating a tuck on the back. I wanted it to be perfect.

I snapped a few shots before sending him off in the mail — he’s due Thursday — so I cut it close but he’ll make in under the wire.

Let’s hope he goes to a good home. He’ll debut at the Silent Auction in Houston in November.

If you want to see the finished piece, he’s here.

This entry was posted by Virginia Greaves on September 18, 2016 at 4:22 pm, and is filed under Design, Exhibition. Follow any responses to this post through RSS 2.0.You can leave a response or trackback from your own site.