« The Creative Spirit
What’s in a Name »

How to Eat an Elephant

Often, I wonder what to name a blog post — but not this one. At first, I was going to title it, Nothing is Ever Easy. That’s what I had in my head as I started this morning, but it quickly turned into How to Eat an Elephant.

My Elephant is the Horses. I have been holding off quilting it until I took a long-arming class at my local quilt shop. I had it in my head that, because of its size, I had to put it on a frame. So I worked on every other project in my house while I waited for my class, which I had last Saturday — except it wasn’t what I thought it would be.

I was very lucky to be given the chance to sew on four different HandiQuilter long-arm machines. The 1st was the Sweet 16 which was set into a table. I was sure that this was NOT the one for me. The next model up was the Simply 16 on a small frame, then the Avante on a full sized frame, and finally the Fusion on the largest frame. I had my eye on the Avante.

There were three other people in my class, so we rotated through the machines. I started with the Simply 16 on the smallest frame. Although I don’t normally quilt a lot of feathers, I decided that it was a good place to start. I was so surprised that I couldn’t make the petals come back to the stem. It was really hard to control. And then I worked on the Avante, and it was better, but not a lot. The machine was not moving as I wanted it to. The teacher suggested that I was too used to free motion quilting with my hands guiding the piece, rather than guiding the machine over the top of the quilt. Then I tried a pantograph on the Fusion. I’m not the least bit interested in pantographs, but it seemed to be the highlight of the class to everyone else, and it was a good exercise to just follow a drawn line. It was hard to do too.

And then I sat down at the Sweet 16, and I just quilted. It felt natural, and my feathers looked great. I was in control.

<sigh> I knew by the end that there was no way that I could put the horses on a frame. It’s possible for me to develop the skill over time, but it’s not something that’s going to happen quickly. Renting by the hour at the local shop, I don’t know that it will ever happen. The skill set that I’ve developed is just not as translatable to a frame as I wanted (& needed) it to be.

So I came home and knew that I was going to spray baste my quilt and start quilting it here at home. I may take it to the shop towards the end, when it’s at its heaviest, when I’m quilting the background, and see if the Sweet 16 is a big improvement over quilting it at home, but the table, even with the extra side pieces, is not very big. Here at home, I’ll set up many tables around my machine, and although I’ll have to crawl on the floor to get out of my studio, hopefully it’ll hold the length of the quilt as I’m working on it so gravity won’t be working against me.

And today, I laid out my sheet in the kitchen, I taped things down, and I started spraying. I do wish that I had put down a second sheet as I had quite a bit of overspray onto my wooden floor. My poor socks are covered in a layer of spray glue. But it’s done. My back hurts, but it’s basted. 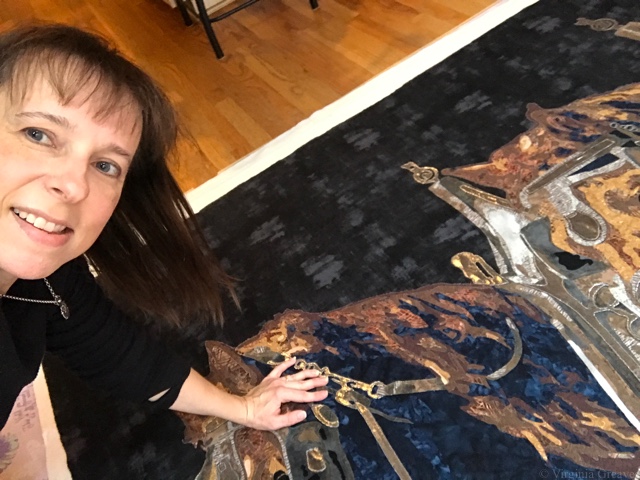 At least there was no one here to laugh at me as I crawled around on the floor, smoothing it out.

When I was done, I took it upstairs and made sure the back and front were perfectly smooth. I always find that, even with taping, I have a few lumps and wrinkles that need to be worked out. Thank goodness the spray basting allows me to reposition everything until it’s smooth.

Now it’s ready for quilting. Wish me luck. I think I might need it.

This entry was posted by Virginia Greaves on December 5, 2016 at 9:44 pm, and is filed under Quilting. Follow any responses to this post through RSS 2.0.You can leave a response or trackback from your own site.