Back in December, I created a small 5″x7″ piece called The Dark Angel. As I’ve mentioned before, I loved it so much that I decided to use that as a study and create a larger piece based on that image. This is how I came to create The Bowl Judgments.

I do not usually add a border to my pieces but in this instance, I decided that a border could add another dimension to the piece. Just as the middle portion is about the luminosity of the colors on the black, I wanted the border to be the inverse. Using black fabric and a light purple thread, I created a subtle sweep of quilting lines.

I did, by the way, attempt the McTavish quilting technique on the borders. I probably got better as I went along. I suppose that the variance in the the quilting will just have to be chalked up to artistic variance.

I must admit that photographing his piece has been very difficult. My camera has not been happy and I have taken many pictures in an effort to create an image that accurately portrays how the piece looks.

At first, my camera locked up completely. As far as I can tell, it couldn’t tell where the image was — even in a room with special spotlights pointed at it. At some point, late in the day, it finally gave me something. 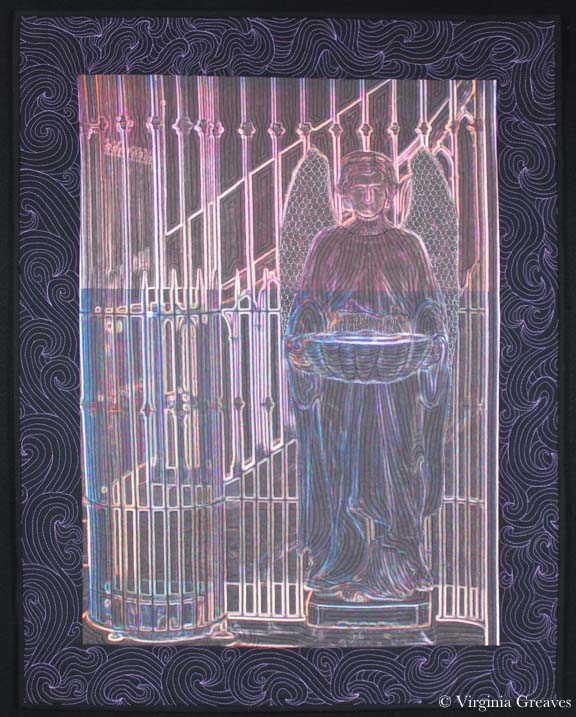 But really, this picture makes the border look almost like printed fabric. The quilting lines are more subtle and the image in the middle is not that washed out.

I finally realized that the camera would be happier if I used a white background. I thankfully had a large piece of white felt in my closet that I hung on my black design wall. From there, I set the autofocus point on the black border — and I think that this comes closest to the actual piece. 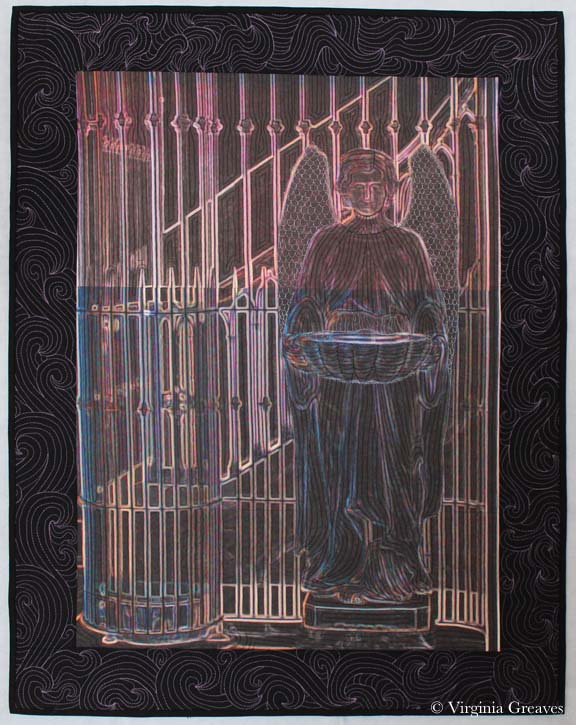 It always surprises me when the camera doesn’t just take a picture of what my eye can see. Our eyes are so much more complex than we give them credit for.

I so loved working on this angel that I would like to do another one — but I’ll have to plan some trips for pictures. Right now I’m researching another portrait to do but haven’t settled on an idea yet.

This entry was posted by Virginia Greaves on January 20, 2013 at 4:49 pm, and is filed under Inkjet Fabric Printing, Photography, Quilting. Follow any responses to this post through RSS 2.0.You can leave a response or trackback from your own site.