How To Make Lemonade

Last week I finished fusing the Yorkie. I put her up on my black design wall for a quick pic. Most things look so stunning on black. 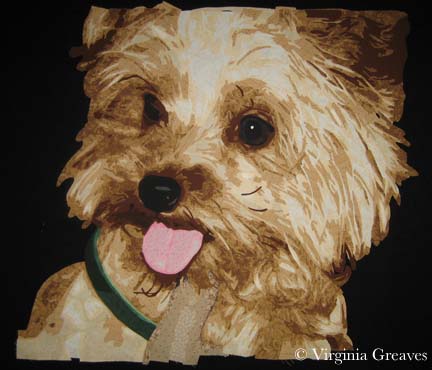 And then I started the tedious process of appliquing all of those raw edges. I use a tiny zigzag. There is so much thread in this piece from applique, I doubt there will be much stabilizer that I can tear off the back.

I did applique the piece onto white muslin. I knew that my background was going to have its own applique elements — so it was easiest to use the muslin as my canvas.

Just as I was finishing the applique on the Yorkie, Pokey Bolton announced the exhibit It’s Raining Cats & Dogs at the IQA-Houston show in the Fall. I had known about it earlier because there was an invitational exhibit that included my piece Unconditional last year — and I was told that the following year, it would be juried. So I did have this in mind as I started this piece — and I also think that animals are much more marketable than people in terms of selling my work.

However, Pokey threw me a curve ball. The minimum on any side must be 25″ — the shortest side of mine was 24″. Clearly, I was going to have to make the best of things. I threw on my creative thinking cap and starting working. I considered a border — the easiest solution — but I don’t think that that would add anything to the design. I finally decided to extend the bottom. I freeform cut it too — I felt very brave. There is more here than I’ll need but there will be some shrinkage in quilting. 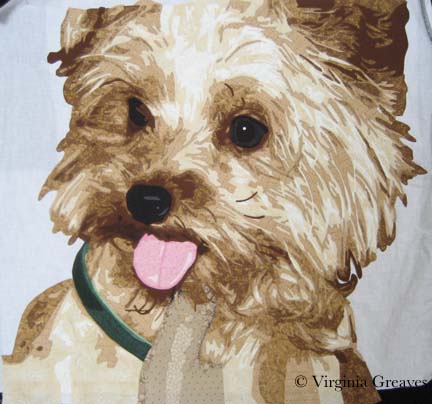 I also decided that the left eye just wasn’t cutting it. There is a sprig of hair obstructing our view of the eye, but I still felt like it needed more of the detail of the iris. 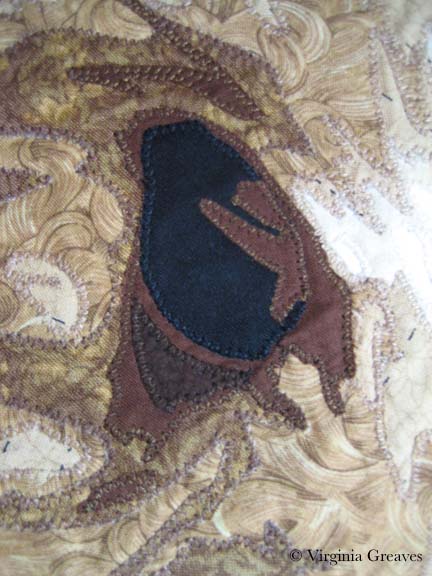 Now it makes more sense to me. 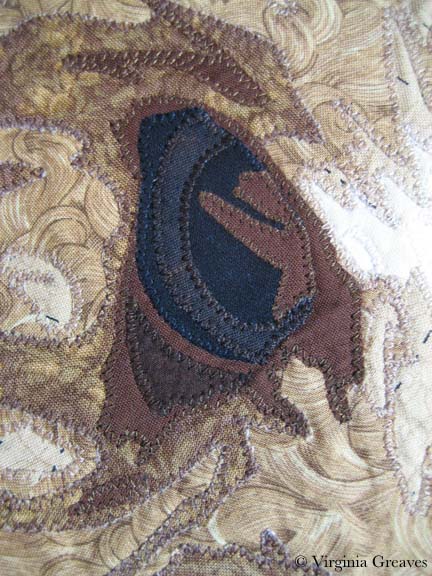 This is the final top. I have added the details of a jacket around her and the background behind the two figures. 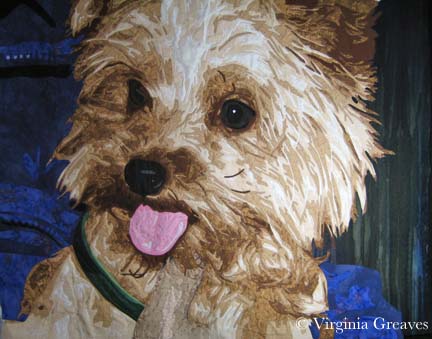 I taught a class last week to my Fiber Art Fusion group about Color/Value & Picking Fabrics. It made me realize how dependent I’ve become on my color wheel. Can you see the tetradic color scheme (or double complement) I used? I think it works — although this is technically the hardest color combination to do successfully. I actually had no idea what to put in the background on the right — but figured out that pulling the green over from the collar but in a value deeper than the coat would work best.

So now I will start quilting. I just wanted to share with you how this little piece was coming along.

This entry was posted by Virginia Greaves on February 22, 2013 at 1:19 pm, and is filed under Applique, Design, Exhibition. Follow any responses to this post through RSS 2.0.You can leave a response or trackback from your own site.