After finishing Firecracker, I did not have another project in mind. I spent a few days doing administrative things — donating my time to do some volunteer work — but then it was time for the rubber to hit the road. If inspiration doesn’t come, you still have to keep creating. So I went looking.

I have had a fascination for years with ravens. I have a newspaper clipping that is probably eight years old on my design wall about the ravens kept at the Tower of London. Legend tells us that if the ravens were to leave the Tower, the Tower and thus the Kingdom of Great Britain would be lost. Charles II declared that at least six be held captive there for the rest of time. Their wings are clipped and they are cared for by a Yeoman Warder.

All of those ravens are common — or black — but there are rare instances of white ravens in British Columbia, Canada. These are not albino ravens with red eyes but rather white ravens with blue eyes.

Which leads me to the inevitable question — what if a white raven were to inhabit the Tower?

There is a wonderful photographer at Qualicum which the white ravens call home — Mike Yip. He very graciously gave me permission to use one of his photographs as inspiration for this piece.

This is the first value — pure white. I started this piece in the late afternoon and the failing light gave me a yellow cast on my design surface. 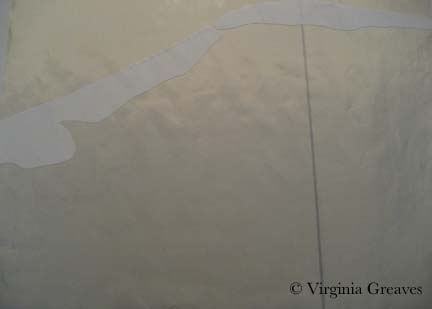 The second value is almost harder to see as it has a yellow cast to it. 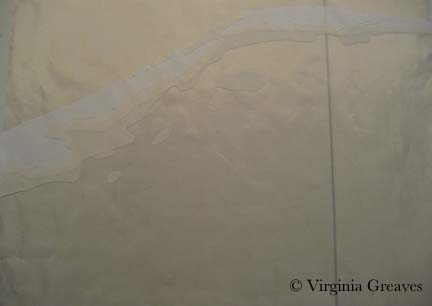 The third value is a little easier to see. 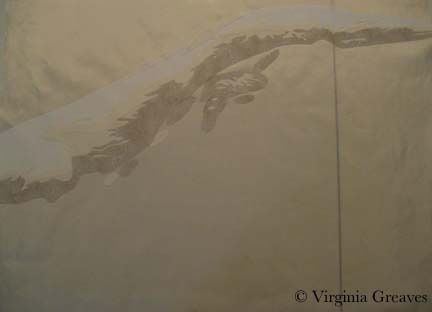 The next day, of course, the light in my studio was better for photography. This is the fourth value and you can really start to see the bird emerge. It is strange to think that a white bird is more than white — but even the majority of the colors in the clouds in the sky are not white. White always has a supporting cast of characters. 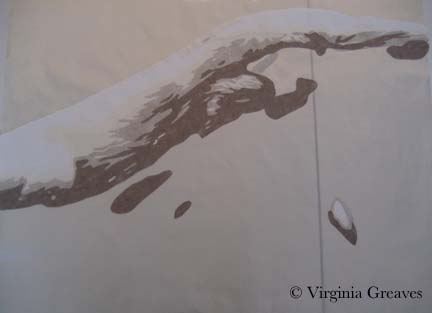 This is the fifth value. 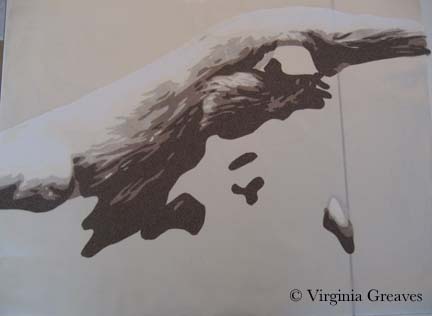 And this is the sixth. I had to go outside my stash to find the fabrics for this piece and I had counted on 7 values — but I miscalculated — there are 8. So I took my range of fabrics, tried to figure out where I felt like there was a large enough value jump between two fabrics, and went to my fabric drawer to try to fill it. I was very lucky — I had the perfect fabric that snuggled in perfectly to what I had already set up — and that is the fabric here. 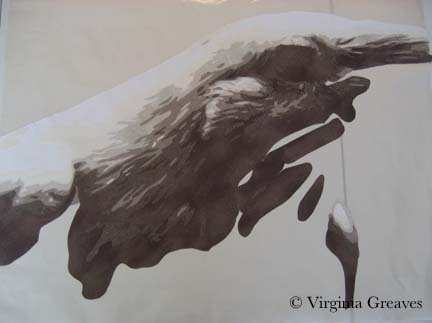 The seventh value goes into gray. 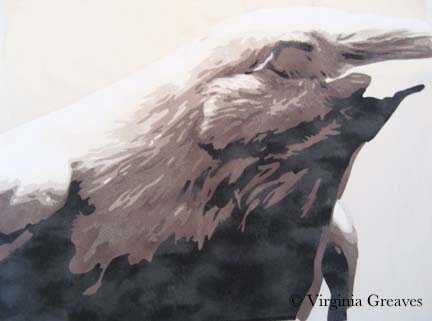 And the eighth and final value is the black. 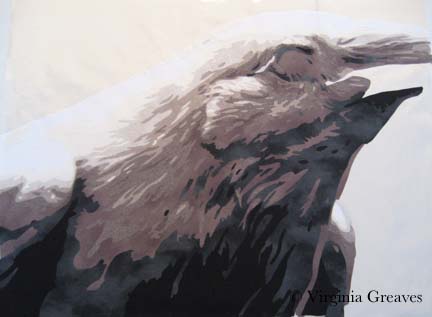 Then I worked on her eye. I had the perfect blue in my stash. It is actually a little lighter than the blue in the photograph but I think it works well. I’m surprised at how visual I’ve become. I envisioned the exact blue that I wanted and then went to pull it from the drawer. 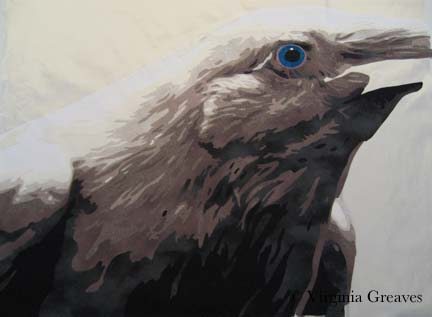 The beak was tricky. It has a different texture to the feathers and I knew that to make it stand out visually from what I had done previously, I needed to use different fabrics. I liked the range of pink for the top of the beak, but they didn’t work as well for the bottom. 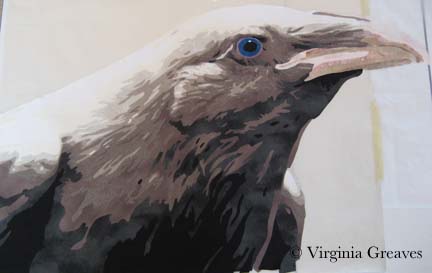 In the photograph, the plum around her eye is repeated in the lower section of the beak — so I tried a range of plums for the lower beak. This is closer to where I want to be. There is always something in a piece that isn’t clear cut. 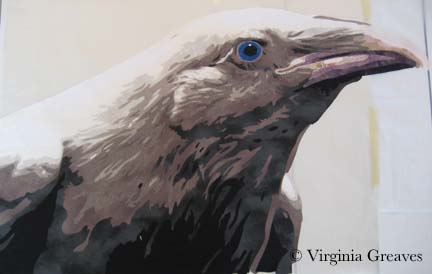 You’ll notice that I had to tape my smaller pressing sheet to my newer one. I never thought I would go beyond the dimensions of my ultra large pressing sheet — but it didn’t take me long to press the boundaries.

I don’t know if I’ll keep the beak the way it is, but I’ve set it aside on my design wall for now. I’m working on the Tower pieces. Once again, I loved the way she looked so much on the black, I considering giving her a plain background — but then she also looks good on the primary Tower fabric that I chose, so I’m going to experiment with that and see where it takes me.

This entry was posted by Virginia Greaves on March 17, 2013 at 10:42 am, and is filed under Design, Inspiration. Follow any responses to this post through RSS 2.0.You can leave a response or trackback from your own site.