1
by Virginia Greaves in Exhibition 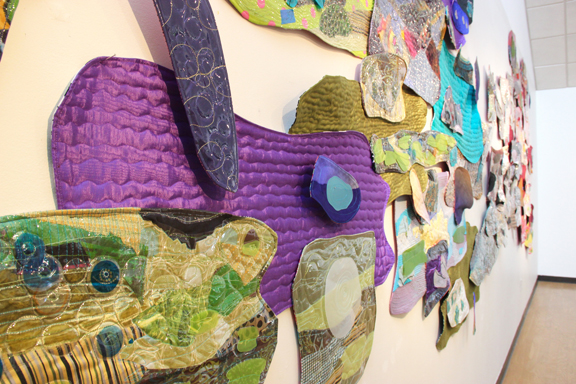 Wash & Wax, the collaboration between Leisa Rich & myself of abstract pieces inspired by images taken in a car wash, is traveling to the Irving Arts Center in Irving, Texas, May 21 – July 3. The reception is June 26th 2:00-4:00pm. If you’re in the area, please visit the exhibit! It’s a great show, we have a new piece added to the collection, and the huge wall piece looks different in every installation.

0
by Virginia Greaves in Collaboration, Exhibition

Leisa and I went through the gallery and made a quick video talking about the collaboration. We recorded it on an iPhone, so even though I amped up the audio, I’m still a little hard to hear since I’m not holding the phone most of the time. But this is my first video editing adventure. I learned how to cut out rough transition sections and clean it up using iMovie. I make make more videos in the future.

The Best of Intentions

One of the last pieces that Leisa and I planned for our collaboration was a piece that we planned to cut into 12 smaller pieces that we would then frame and sell individually. I planned it to be a size that would split easily into 12 pieces and would fit in the size frame we chose with some extra to pull around to the back.

The best of intentions. So in my notes, I’ve been referring to this piece as Abstract-Mini’s.

I started with the red. I shared this on my Facebook to give a taste of what the new piece would be like.

And here is all the red laid out. I put on the grays only if they fell within the color areas I was working on. 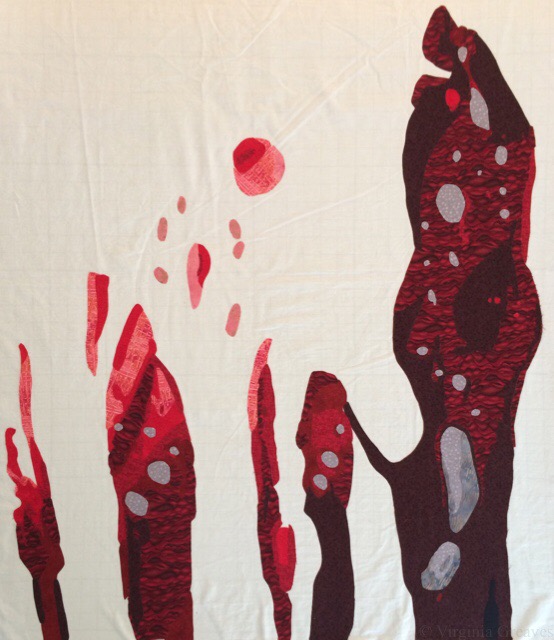 Then I added yellow. Should have really done it first. Tucked it under the red. 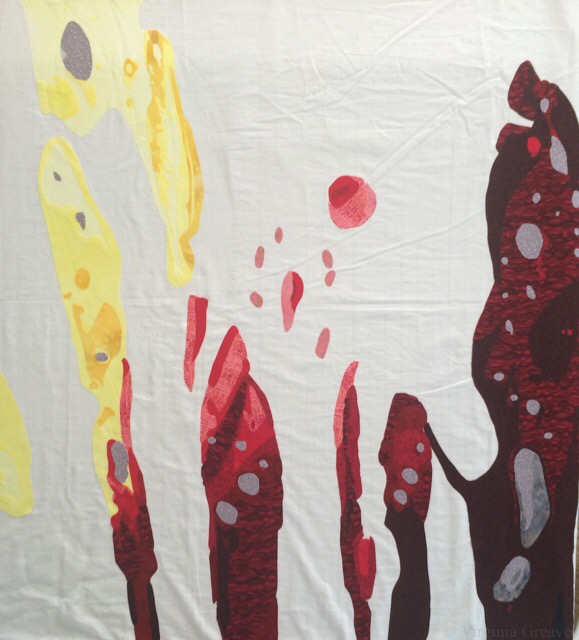 And here are the blues — with a little bit of orange up in the right-hand corner. 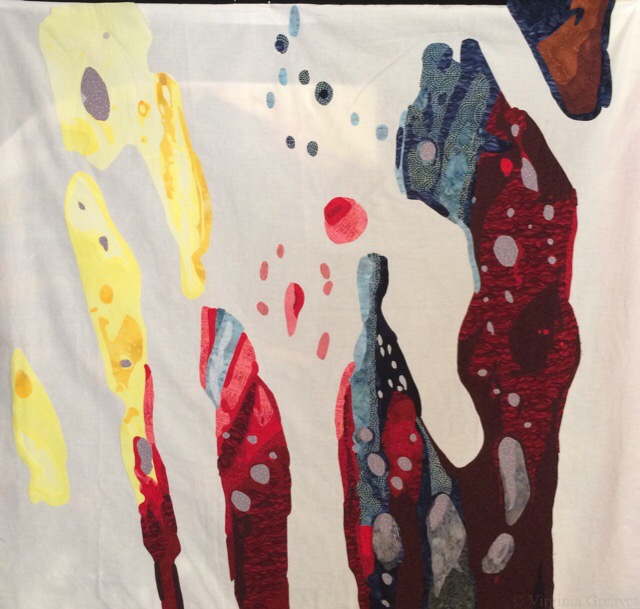 Then I had to go back to the store because I didn’t have nearly enough gray. I had promised Leisa the appliqué of this last week, and so I was really pressed for time. When I came home to wash it (because I always wash my fabric before I use it), I realized my washing machine had died. It was full of soaking wet towels. The engine still worked, but a belt had broken so the tub couldn’t spin out all the water.

So I triaged all the towels across my deck. Unlike in other countries, hanging laundry in the yard is largely frowned upon here. It is certainly against my HOA rules, but I didn’t have a lot of choices.

And for my new fabrics, I set them to boil in my extra large ceramic pot on the stove. Boiling is actually better for getting out excess dye, and while I had it going, I rewashed all my new reds, too. (One of them had crocked onto some of the gray fabric all ready.)

By early Sunday, it was all cut out. I pinned it on my design wall and took a pic. 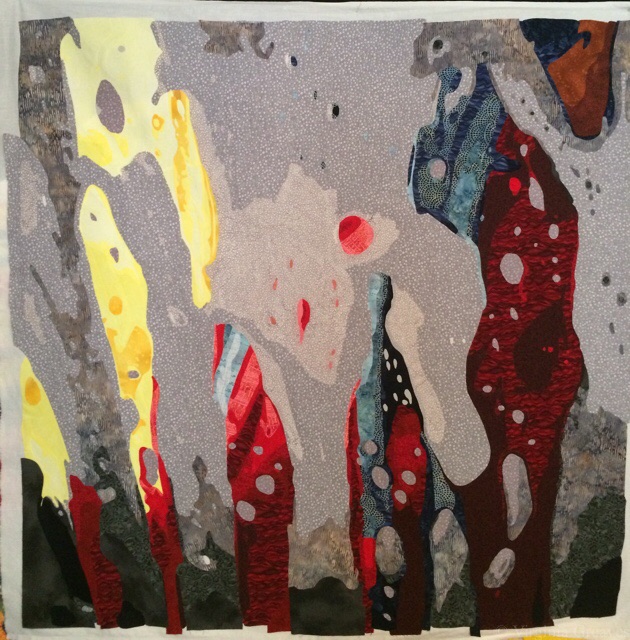 It’s much calmer than the other pieces. There isn’t as much darkness, and the grays give a lighter feeling of the soapiness in the car wash. I liked it, but I started to see that it wasn’t going to cut up well at all.

I did tell Leisa about my concern and told her that I’d leave her with the final decision. We set a meeting for today.

This morning, I had some time and decided that the dots in the pattern of the gray fabrics didn’t add enough texture, so I started randomly cutting out bubbles and adding them. I think it looks better. (The color is also better overall since it’s daylight in my studio at the time I took the pic versus nighttime in the pic above.) 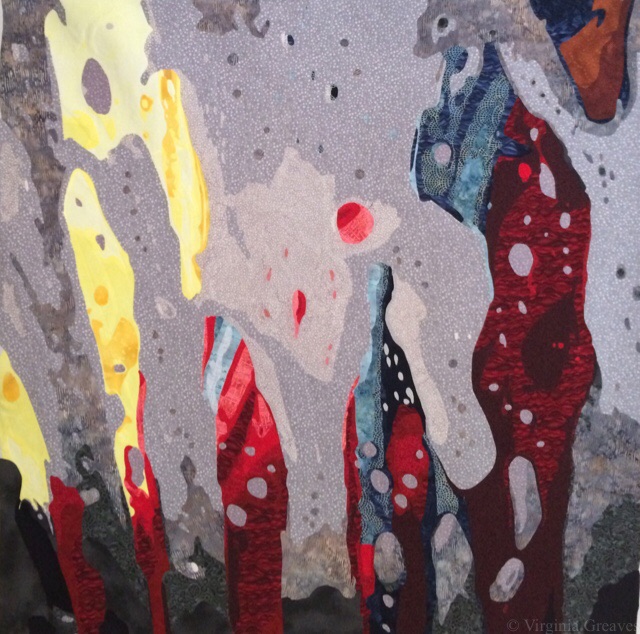 We met at Starbuck’s, and she agreed — this wouldn’t cut up well into 12 pieces. Each of the 12 pieces needs to have a lot of detail. The scale of this is wrong for that. This will, however, still be a wonderful piece in its entirety. I have changed its temporary name to abstract #7.

And now Leisa has it to work her embroidery magic on. I also gave her #5. It’s done except for a sleeve on the back. She wants to spend a couple of weeks hand-stitching on that one.

The planned abstract #7 will now become #8. It will be digitally printed onto fabric, and I will share more on that piece at a later time. We both agreed that we love that inspirational piece too much to not include it in the show.

I still have to do 12 mini’s, though. I am planning to cut them more organically using the fabrics that I used in #7.

So I’m behind — and yet ahead.

My new washing machine comes tomorrow. When I picked it out, I told the salesman, it has to be a top loader, it has to accept high sudsing detergent (which any quilter that uses synthrapol knows — and which means no High Efficiency), and the basket has to be big because I do a lot of laundry. There were two choices. I went with the Whirlpool. I suspect that the next time I have to buy a washing machine, I won’t have a choice but to buy an HE. Let’s hope they’ve worked out the problems with them by then.

I’m also working on an article about the collaboration for the SAQA Journal. Leisa and I talked about the draft today, and this afternoon, I spent a couple of hours rephotographing three of the pieces in my studio on a white background. It took me a couple of hours to get the pics where I felt like they would be good enough. I understand why people pay a professional photographer. One shot can take a really long time.

All of my studio time nowadays is dedicated to completing the projects for the two-person show I’m collaborating on with Leisa Rich to be debuted in October. Last week, while she was working on #4, I drafted #5 and started cutting it out.

Leisa asked me to go big on this one — so that is what I did. I went to the limits of what I could currently handle in my studio for this kind of project — 48″ x 60″. I had to have a surface large enough to fuse the shapes onto my canvas. Since my table wasn’t large enough, I ended up laying one of my design walls flat on the floor — it was exactly 48″ wide.

And for the pattern, for the first time in years, I used the services of a blueprint company and a vector program. My copy of CorelDraw was woefully out of date, and I don’t have a PC anymore, so I ended up purchasing iDraw which worked perfectly for my purposes. (Even after 15 or so years, my Wacom Graphire 4 tablet continues to be a workhorse for me.) I created the pattern and emailed it to the local shop. I did spend some time talking to them about what I wanted though because a print of this size can cost upwards of $80. I had it printed out on inexpensive paper on their 36″ wide printer and then taped the two pieces together (the final cost was under $10).

I also had to buy some rather large pieces of red fabric for this. I didn’t have anything in my stash nearly large enough.

Here you see it with all the yellows, blues, and dark purples. 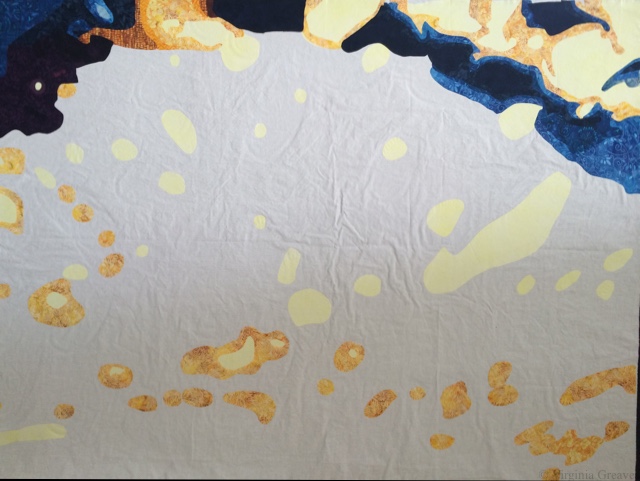 And here you see the beginnings of the red. 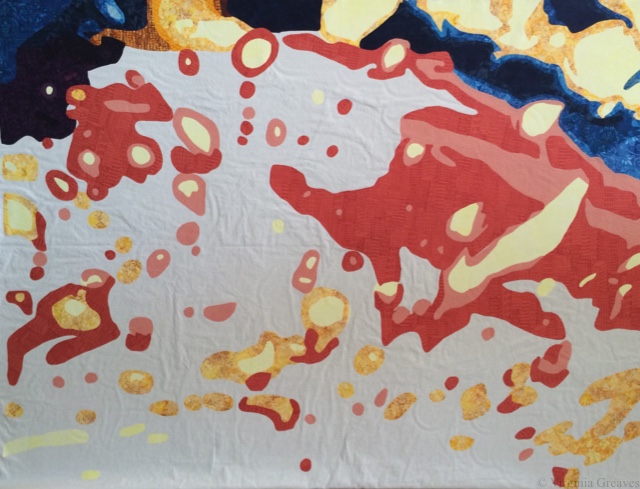 Lots and lots of red. For this particular value, I had to buy 2 yards, and the largest piece still had to be spliced in one place because it was wider than 42″ (the width of the fabric). 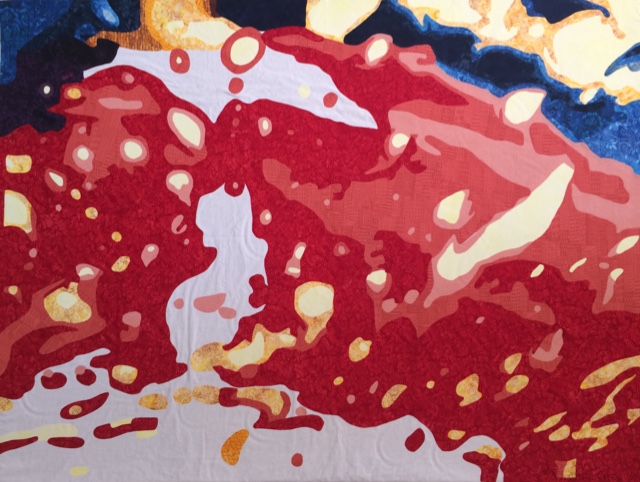 And this is the final piece. I don’t know that my iPhone did the best job in the world, but it’s fine for an in-process shot. I think that this one is the most evocative of the car wash theme that we’ve done so far. 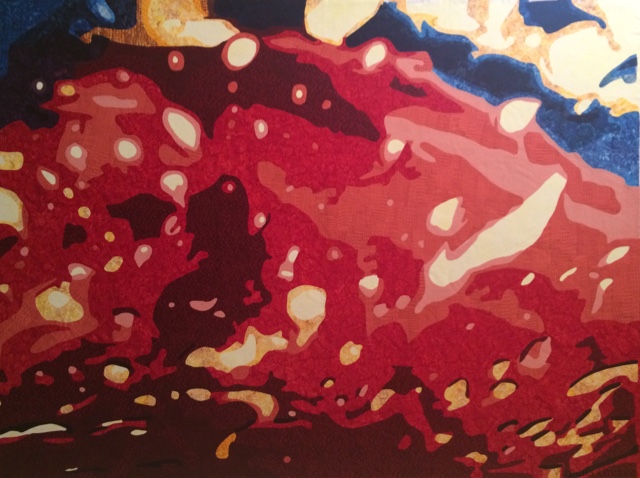 To be honest, I was surprised at the huge leap between value 4 and 5 — and that 6 didn’t stand out very well against value 5– but after cutting out almost 2 yards of value 5, I wasn’t willing to start over. It still accomplishes what I wanted it to. There is a lot of room for Leisa to go wild on the embroidery — can’t wait to see what she does with this one.

The last time we met, she gave me some more pieces to work on for the large wall piece, and I still have #4 to quilt. Lots to do.