Although I’ve made many dog portraits, my current pet is brindled, something I despaired that I would never be able to capture in fabric. A brindled animal is typically brown with streaks of black. It’s very distinctive. Given the nature of closed shapes in appliqué, I didn’t think that it was something that I could recreate. However, I was speaking with one of my SAQA mentees recently, and she had tried it in her work with success and encouraged me to do the same. It’s all about the fabric.

So for this piece, I chose a picture I had taken of her with her great big tongue curled up over her nose. It showed a lot of her personality. I searched through my pinks for just the right ones and started there. I could have put the tongue on last but worried about the darker fabrics I would use for her fur showing through, so I started with the tongue. 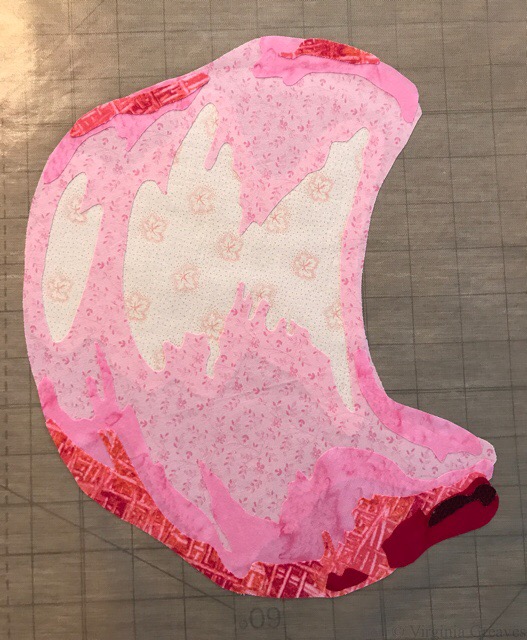 And then after the tongue, I went on to the wet nose. 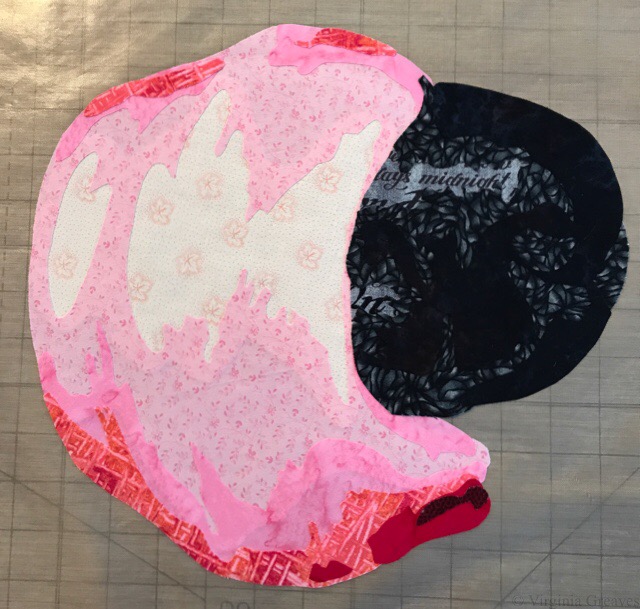 And then the hard part — the fur. I chose highly textured browns. These are the first two values, although there’s only the tiniest amount of the lightest brown up there in the top left-hand corner. 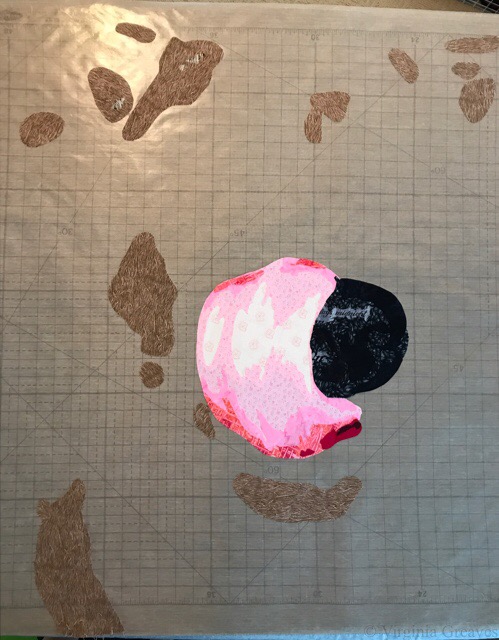 This is the 3rd value — not a very clear pic but probably taken late at night in my studio. Did I mention these are flat on my drafting table and I’m standing above them on a ladder taking the pics? 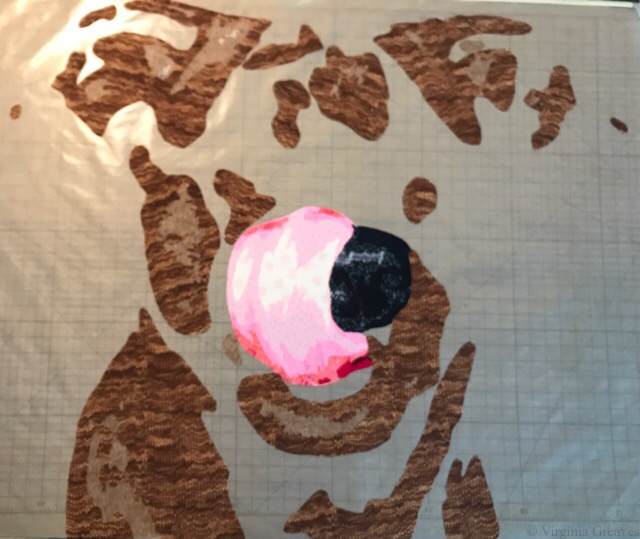 And here, with the next value, you can start to see the magic happen. The textures start to blend together but still maintain their integrity. 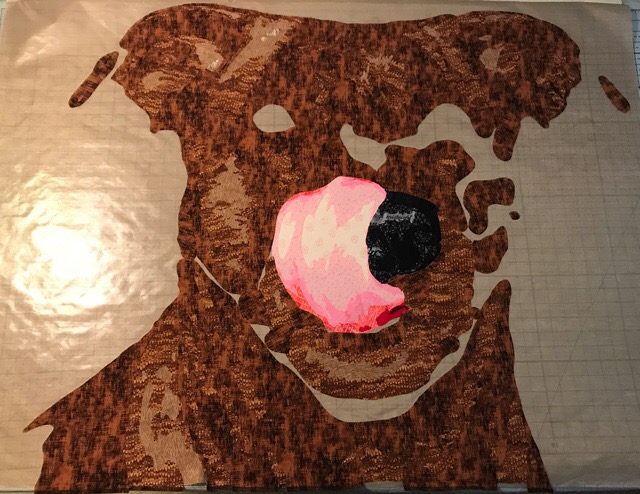 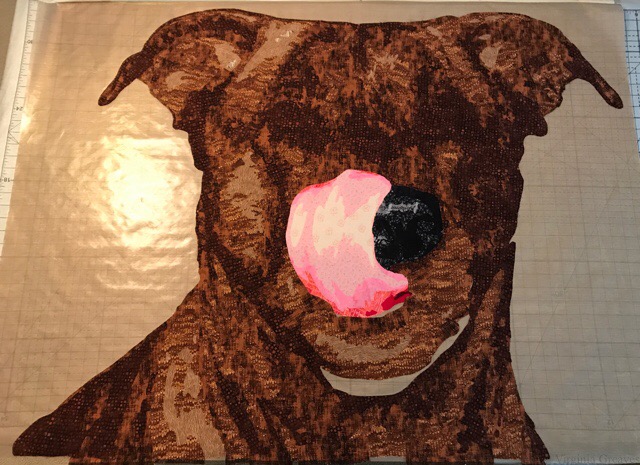 And the darkest value. 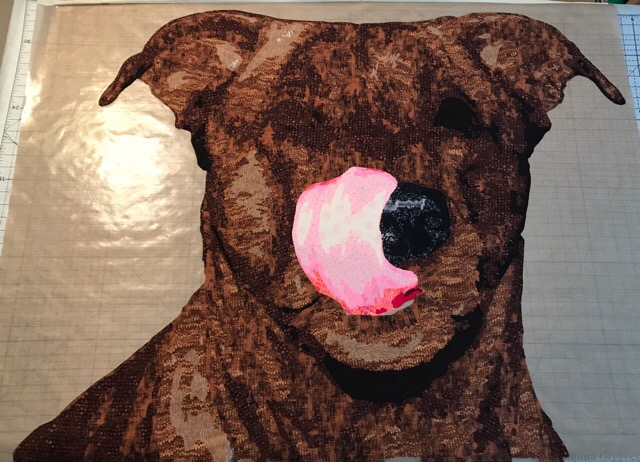 The eyes always make a big difference. It was interesting finding a brown iris color that wouldn’t blend into the fur. 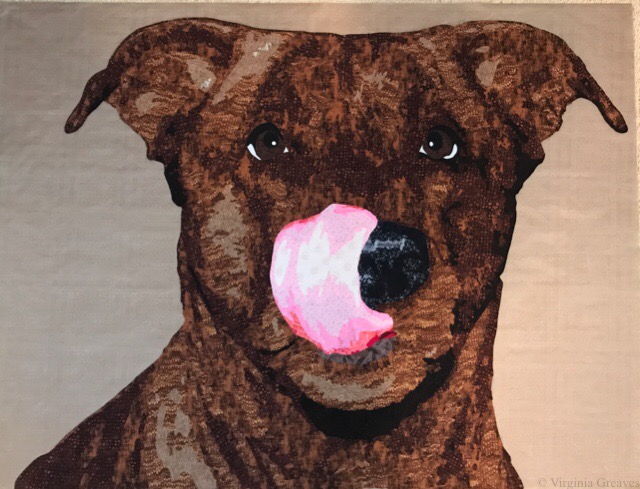 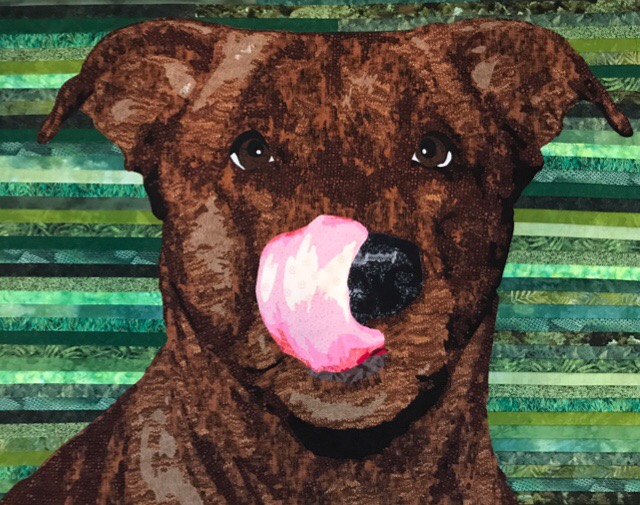 And this is her. This is what she looks like. This is the piece before quilting.

I almost finished this piece in July but a confluence of activity prevented that from happening — so it was finished in early August. And then I was able to then create a piece from beginning to end for the IQA Auction by the end of August. No idea how that happened. I will share pics of that one in another post.

I named it Tasty, and you can find it once quilted and completed on its page here.

This entry was posted by Virginia Greaves on August 31, 2017 at 9:58 am, and is filed under Design, Fusing, Inspiration. Follow any responses to this post through RSS 2.0.You can leave a response or trackback from your own site.